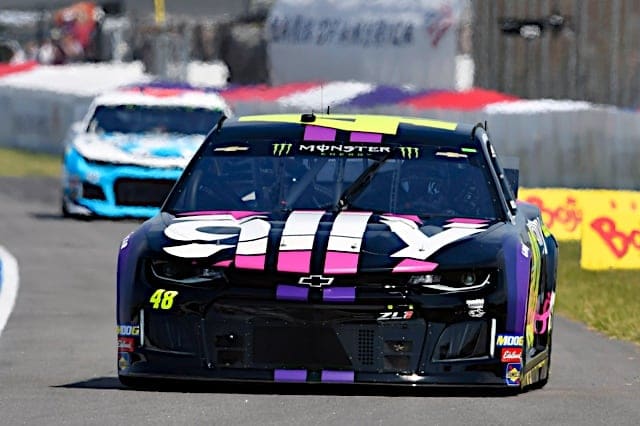 Jimmie Johnson led the first and only practice session on Friday (Sept. 27) in what was filled with a plethora of delays due to incidents.

Johnson, who failed to make the playoffs for the first time ever in his career, ran 13 laps, with the final lap being the fastest at 103.182 mph. Kyle Larson, William Byron, Clint Bowyer and Matt DiBenedetto rounded out the top five.

Speeds are down significantly with the new backstretch chicane in play. Johnson’s lap was more than 3 mph slower than Kyle Busch‘s quick time in opening practice last year.

Austin Cindric filled in for Michael McDowell after McDowell was sent to the hospital for abdominal pain. Cindric was 24th fastest out of the 40 cars that took time.

Austin Cindric prepares to practice for Michael McDowell, who is suffering from some abdominal pain. #nascar ⁦@NASCARONFOX⁩ pic.twitter.com/4t10Pdajtg

Shortly after practice ended, McDowell was cleared to race after he passed kidney stones, per McDowell’s crew chief Drew Blickensderfer.

During the session, there were plenty of incidents. Parker Kligerman hit the wall in turn 1 (Heartburn Turn) and will go to a backup car.

Damn… guess I just tried to roll too much speed into 1. Car just went straight, was really odd. I’ve never wrecked in practice like that in my life.

Major shame… was feeling really good out there in the 2 laps I did prior.

Following Kligerman’s incident, Denny Hamlin also was forced to go to a backup car after he backed it in to the turn 5 barrier.

“It’s supposed to kind of be a weekend off (for my team),” Hamlin told NBCSN. “But obviously I put them behind the eight ball here and took away some track time for myself. Really stinks. But definitely feel like our backup car will be fine.”

Joe Nemechek and Bubba Wallace had minor incidents, but neither was severe enough to go to a backup car.

Qualifying is scheduled for later this afternoon at 4:40 p.m. ET on NBC Sports Network, with two practices on Saturday.