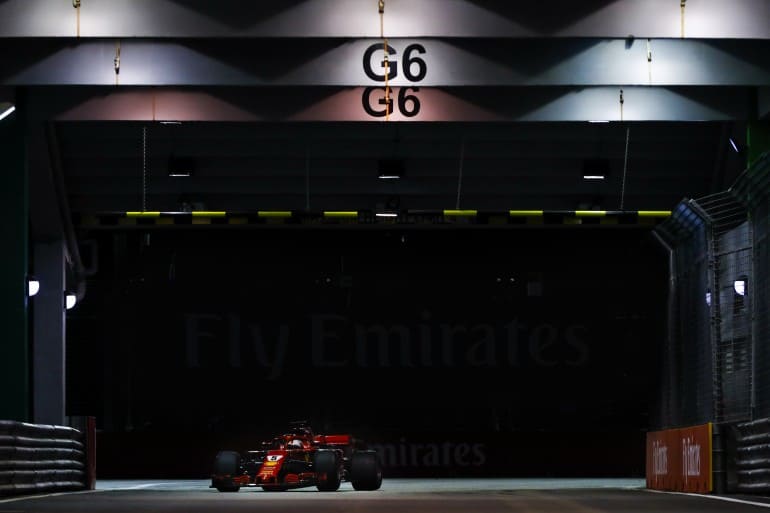 This weekend highlights one of the more strikingly innovative races on the Formula 1 calendar. Announced in 2007 and developed over a year’s span, the inaugural Singapore Grand Prix ran in 2008. It marked dual firsts in being the first street circuit in Asia but more significantly was the first and only night race in F1.

Since then, a number of tracks have come and gone on the schedule. Some new ones have joined and some familiar ones have fallen by the wayside, but the disappointing aspect is that what had once seemed like the harbinger to something new and radical now looks to be the apogee of track innovation.

The racing at the Yas Marina Bay Street Circuit is tight and has brought out the safety car in each of the events held there. Criticizing the level of competition is easy as the novelty has turned to normalcy; the lack of passing has become more apparent and the track has not mustered much in the way of memorable finishes.

All of that is well and good and there is reason to believe that changes could or should be made to make the racing more compelling, though doing so might be a touch difficult with some of the narrow streets involved. Of course, that doesn’t mean that the organizers shouldn’t try, especially as the race is contracted to run through 2021.

While addressing the Singapore GP is one thing, the bigger one is to question why the race did not lead a spearhead in changes to other races. That is to raise the point or question of how come more races are not run at night or that more creativity has not been taken in the track configurations.

There are tracks where such an endeavor would be a fruitless exercise in asinine frustration. For example, how are you going to reconfigure Circuit Gilles Villeneuve, or Monza, or even tracks like Silverstone or Spa? It’s not happening.

But Abu Dhabi, which sits as more of a plaything for the uber-wealthy, is ripe for getting crazy. For as wonderfully technological as the cars are in the sport, the tracks are starting to be a bit of a disappointment.

It’s easy to see that the drivers are ripping around the course and recognize that they’re working the wheel. At one point such a thing was not as easy to see.The advent of traction control and then a slew of other electrical engineering feats meant that the cars were practically piloted from the pits. The starts were one such area where the teams mapped out precise engine releases and basically turned them into a moment when the driver hit a button and away they went. Simple enough.

The sport realized that such innovation had made things a bore or was about to negate the whole enterprise of having, you know, an actual driver in the car. With traction control removed and start technology done away with, the drivers are now at least working.

(There are, of course, drivers on the grid complaining that the cars are too easy to drive or that they should be made more difficult, but there’s always some haughty individual in a group. It’s like that guy in the office that has all the facets of Excel figured out and brags about it, but once confronted with a simple question like locking the top row suddenly becomes a puddle of mush. Screw you, Gary.)

If the cars are pushed to their limits at the present time, how come tracks haven’t forced us all to enjoy something that makes it really look like the drivers are working? It seems like someone should really reconsider what it is a track should look like.

Steve Jobs once claimed that dropping acid was one of the foremost moments in his life and enabled him to see things differently. While not advocating for drug use, that’s the type of thinking that needs to occur with tracks. At this point, Singapore is over a decade old and has lost much of its creative luster. It’s still a beautiful thing to behold, and the racing has some good aspects, but it is no longer what it was and that has been seen in the dropping attendance figures over the past few years. It is no longer a spectacle.

None of this criticism is to indicate that the FIA needs to encourage ramps or loop-de-loops or something out of a children’s cartoon, but there does need to be a reimagining of sorts, a way of seeing the tracks as something more than just hyper speed. Automotive technology of today means that 4-cylinder cars can perform ably better than V8 monsters of yesterday, so top speeds are not a thing of consequence like they once were.

There’s no reason that F1 will consider doing anything different any time soon. The contracts that have been signed with the tracks ensure that. In addition, the cars themselves are going through a massive redesign (something the teams and the governing body continue to bicker about as they try to reach some kind of peculiar consensus).

Someday, maybe, they’ll actually start looking at just what kind of driving is being done rather than in what kind of machine. Ah, perchance to dream.