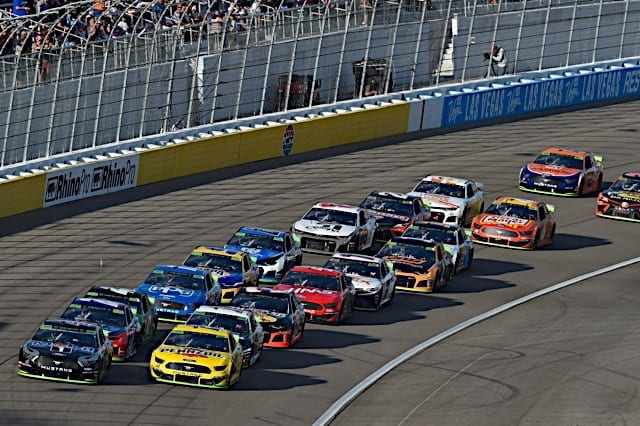 It was somewhat of a tame race, though the scheduling was a bit curious. The desert heat in the summer killed most of the Gander Outdoors Truck Series engines, and if the Cup race was held in the daytime, that would have been awful for drivers, crews and fans, but at the same time, would have likely made for a better race.

Particularly going head-to-head with the NFL, it seemed like an unwinnable position for NASCAR here.

For the moment, Martin Truex Jr  has reasserted himself as the top driver at Joe Gibbs Racing after capturing the checkered flag and locking himself into the Round of 12 with his fifth win of the year, in addition to four stage wins, 11 top fives and 16 top 10s.

Chip Ganassi Racing’s Kurt Busch hasn’t been that great at his home racetrack, continuing his pattern of poor results after a crash left him in a last-place 39th. That was his fifth DNF at LVMS in his Cup career, and his 11th time on the wrong side of the top 20 in 20 starts. (He also has two poles and five top 10s, so he’s good there, sometimes.)

Stewart-Haas Racing’s Kevin Harvick couldn’t make it two in a row, but he’s collected three wins, five top fives and seven top 10s in the past eight races, with five stage wins, 10 top fives and 18 top 10s for the season.

Erik Jones‘ roller-coaster season continued, starting his playoffs on the wrong foot after a transmission problem relegated him to a 36th-place finish. He has the win at Darlington, nine top fives and 13 top 10s, but in the past five races, he’s also finished 18th, 22nd, 39th and 36th. He also has a four-race stretch earlier in the year where he went third, third, second and fourth, so this rough patch could be a fluke.

Among non-playoff drivers, Austin Dillon was the highest finisher at 12th, his fourth top 15 in the past five races, which is a hot streak considering how this season has gone for Richard Childress Racing. Dillon has 11 top 15s so far this season.

Ricky Stenhouse Jr‘s rocky year continued with the 26th-place result from Sunday night, his 14th time this season on the wrong side of the top 20. On the plus side, it was the best finish for the Roush Fenway Racing No. 17 in the past five races.

The first race of #NASCARPlayoffs results in a P4 finish for @chaseelliott at @LVMotorSpeedway! pic.twitter.com/YvduWjyKQg

White doesn’t really work on a modern race car for some reason. If white is the dominant color in a paint scheme, there’s something going to look a little off about it somehow, especially with Denny Hamlin and Chase Elliott, which come up often. So it was good to see Elliott’s No. 9 using a yellow-based scheme, which was a much improved version that they’ll hopefully run more next season.

The royal blue and yellow gold was great, and while the large lime green Mountain Dew splotch threw things off, at least it matched the playoff trim on the spoiler and splitter.

Kyle Busch went on a Twitter rant following the race, which some of his followers and fellow drivers had fun with.

So when you running the Chili Bowl? FYI no spotters there. @KyleBusch

Kyle Larson jokingly asked when he was going to Tulsa to run the Chili Bowl, which would be an interesting new challenge that would be worth watching.

I wouldn’t either! I’ve wrecked in a target parking lot before. https://t.co/Sr5HIL3tVz

THEY NEED TO CALM DOWN,

The entire Southern Nevada area loves their Golden Knights hockey, and so were predictably far more excited about the Knights’ preseason opening win over the Arizona Coyotes earlier in the day, and how to soon-to-arrive Oakland Raiders did in their matchup with the Kansas City Chiefs. VGK parody fan account, The Gilded Jester, attended the race because VGK right wing Mark Stone was the honorary pace car driver, and the results were entertainingly clueless.

The Cup and Xfinity series both go to the three-quarter-mile oval of Richmond Raceway this weekend, while the Gander Outdoors Truck Series is off for nearly a month after wrapping up the first round of its playoffs.

The Xfinity playoffs begin with the GoBowling 250 on Friday, Sept. 20, at 7:30 p.m. ET, with TV coverage on NBC Sports Network. It seems like a good bet that Christopher Bell will take the checkered flag, though Chase Briscoe is a very good short track racer who might be in the mix as well.

The Cup Series’ Federated Auto Parts 400 goes green around 7:30 p.m. ET on Saturday, Sept. 21, with TV coverage on the NBC Sports Network. Given how this weekend went, it seems safe to say that Kyle Busch will get his seventh Cup win at the venue, since an angry Rowdy is a speedy Rowdy.