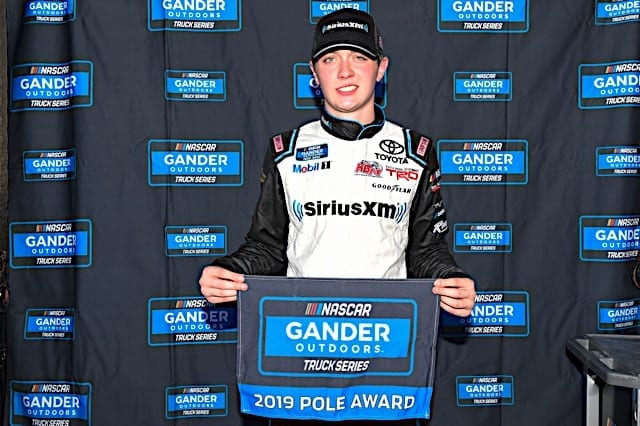 Eckes’ fast lap speed of 178.077 mph edged out Ross Chastain’s speed of 178.012 mph to take the top spot. Chastain was the fastest of the series’ eight playoff drivers vying for six spots in the next round.

Eckes’ KBM teammate, Todd Gilliland, qualified third with a lap speed of 177.907 mph. GMS Racing’s Brett Moffitt, already locked into the next round of the playoffs, was fourth at 177.585 mph. The No. 88 ThorSport truck of Matt Crafton rounded out the top five with a fast lap of 177.375 mph.

There were a couple of incidents that brought out the red flag during the period. First, Tyler Hill spun and his spoiler dug into the grass:

A tough break for @Tyler_Hill_ in qualifying.

Watch as the No. 5️⃣6️⃣ goes around at @LVMotorSpeedway. pic.twitter.com/qEx1WNVoYr

Hill failed to qualify for the race.

Soon after, Jesse Iwuji had a scary incident during his run driving Josh Reaume’s Chevrolet.

.@Jesse_Iwuji hits the pit road wall during his qualifying run, but exits under his own power.

Cleanup is underway at @LVMotorSpeedway. pic.twitter.com/85v77xGudX

Iwuji qualified on owner’s points and took the final spot in the field. Cory Roper, Hill and Justin Johnson failed to qualify. However, since Iwuji didn’t have a backup truck, local favorite Johnson rebranded his truck into the No. 34 to make it in the race:

Local Vegas driver Justin Johnson — whose dream was to race at LVMS — failed to qualify but his truck is being rebranded into the 34 so Johnson can race tonight. pic.twitter.com/TldKN6oBPV

The World of Westgate 200 will get underway at 9 p.m. ET with television coverage provided by FOX Sports 1.