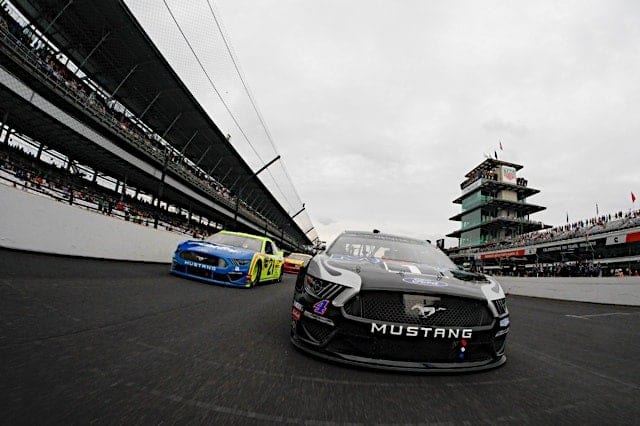 Indianapolis Motor Speedway is one of the great cathedrals of auto racing, with over a century’s worth of events run there. One of the overlooked aspects of cathedrals, aside from their beauty, is that they are a little creepy at the same time. In the history of IMS, many racers have died while competing, making the racetrack a graveyard and mausoleum of sorts.

NASCAR has only been competing there in what is now known as the Monster Energy NASCAR Cup Series since the early 1990s, but Sunday’s edition of the Brickyard 400 — technically known this year as the Big Machine Vodka 400 at the Brickyard powered by Florida Georgia Line — saw a fair amount of vehicles perish early and several vicious collisions, though thankfully all the drivers were able to walk away without injury.

But given the intensity of the Pocono-style high-speed crashes and very dull strung-out racing after the initial chaos of restarts, maybe it’s time to call this alliance a failed experiment and give the race date to another track.

Stewart-Haas Racing’s Kevin Harvick crushed the field in pretty much every way possible on Sunday, winning the pole, collecting a stage win, leading the most laps (118) and winning the race, his third win of the season to go along with nine top fives, 17 top 10s, five poles and five stage wins. Happy’s gunning for his second title.

On the plus side, Harvick’s SHR teammate Aric Almirola already has the second-most top 10s of his Cup Series career (10) this season, and he’s in the playoffs. On the negative side, he hasn’t finished in the top 10 since the July Daytona race, and before that, Sonoma. He only has two DNFs this season, but the No. 10 just hasn’t had much speed — since Kentucky, Almirola’s finishes are 14th, 11th, 12th, 12th, 33rd, 29th, 17th and 14th. For the season, his average result is 14.8 through the regular season.

No, William Byron hasn’t gotten his first Cup Series win just yet, but it can’t be much longer, can it? The former video game whiz has piled up four poles, three top fives, nine top 10s and a stage win in his first year with new crew chief Chad Knaus. Maybe running the Days of Thunder throwback at Darlington gave some added good luck going into the playoffs.

Jimmie Johnson had to go for broke on Sunday if he was going to make the playoffs, and he did so — which resulted in getting collected in the big eight-car wreck early in the third stage. That led to a 35th-place result and his first DNF of the season. Unfortunately for the seven-time champion, it was his seventh finish outside the top 20 in 2019, and the Hendrick Motorsports No. 48 won’t be competing for a championship for the first time ever.

Ryan Newman‘s move to Roush Fenway Racing to take over the storied No. 6 came as a head-scratcher to many, given the organization’s less-than-stellar performance for much of the past decade. But while a single top five and nine top 10s through the regular season doesn’t initially sound like an amazing year, considering how the same car ran last year with Trevor Bayne and Matt Kenseth sharing the wheel, Newman’s had a phenomenal regular season, and he’s gotten the No. 6 back into the playoff field for the first time since Mark Martin in 2006.

It wasn’t his fault, just in the wrong place at the wrong time, but the big pileup also collected Daniel Hemric, continuing a rather dismal rookie season for the Richard Childress Racing rookie who replaced Newman in the renumbered No. 8. After being a title contender last season in the Xfinity Series, Hemric had just two top 10s (at Talladega and Pocono) in the regular season, with an average result of 23rd. He wrecked out of three of the past seven events, including the past two in a row.

At this point of the year, most of the paint schemes have already been won at least once, and the best of those have already won the Paint Scheme of the Week. So it’s getting a little harder to find winners, but this time it goes to Michael McDowell‘s No. 34 at Front Row Motorsports, which was decked out in the royal blue, yellow and white colors of seafood restaurant Long John Silver’s.

Long John Silver’s is tasty once in a blue moon, because sometimes you just need hush puppies and a reminder that horseradish is unpleasant.

Encouraged by the crowd today at the track. I saw the race in turn 3 today and last year. There were a few thousand around me today. Only a couple hundred last year. It will be a slow climb up, but it’s going in the right direction. Everyone said they enjoyed the race too.

The attendance has been a huge issue on social media all weekend, and the optics didn’t help with the mausoleum impression, at least based on TV. It looked more like a crowd for small-town high school fastpitch softball during the regular season or a college theater production, both of which are events where, in eastern Oklahoma at least, 40 is considered a large audience. Dale Earnhardt Jr. thinks it went well, but from TV, it didn’t look good.

ICYMI: Florida Georgia Line was in town over the weekend for the #Brickyard400 and the band donated a K-9 to IMPD.
The dog is a male German Shepherd but still needs a name. My vote is for Cruise! @IMS | @IMPDnews | @impdk9 | @FLAGALine https://t.co/a0zSyTDuBw

You can have your own opinions about Florida Georgia Line as a band, or their inclusion in the official race name as artists of the presenting sponsor’s sister company record label, but donating a police dog to the Indianapolis Metro Police Department is a cool move.

Former Frontstretch editor Zach Catanzareti is now working for Fox Sports, and he captured some incredible photos of the carnage the Brickyard created during the race.

The Cup Series starts its playoffs next weekend at Las Vegas Motor Speedway, while the Xfinity Series wraps up its regular season and the Gander Outdoors Truck Series finishes the first round of its playoffs. That doesn’t make sense; start them all at the same time, or like someone suggested in the comments last week, run all three series’ playoff competitors at the same time like a sports car race.

The Truck Series’ World of Westgate 200 will be Friday, Sept. 13, going green around 9 p.m. ET with TV coverage on Fox Sports 1. Being on Friday the 13th, and especially being a Truck Series race (and an elimination race at that), things should get pretty crazy. However, many fans are likely going to miss at least half the race while out attending high school football games. In a race where there will be at least eight cautions, a Kyle Busch Motorsports driver will get his first NGOTS win.

The Xfinity Series’ Rhino Pro Truck Outfitters 300 will be Saturday, Sept. 14, going green around 7:30 p.m. ET on the NBC Sports Network. For local college football fans, this will not conflict with the UNLV Rebels’ road contest against the Northwestern Wildcats earlier in the day. Cole Custer wins the race.

The Cup Series’ South Point 400 will go green around 7 p.m. ET on Sunday, Sept. 15, with TV coverage on the NBC Sports Network. This is going directly against the Philadelphia Eagles-Atlanta Falcons Sunday Night Football game on NBC,  which will trounce the race in the ratings. Hometown racer Kurt Busch will triumph after a late restart.