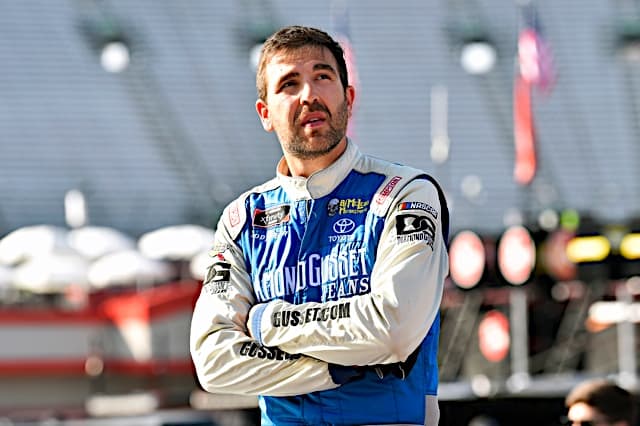 The month of August has been all about change for Tommy Joe Martins, who competed in his first four races for MBM Motorsports, owned by fellow driver Carl Long.

Martins, 32, announced at New Hampshire Motor Speedway in late July that it would be his last race weekend with BJ McLeod Motorsports. Dating back to 2017, the Mississippi native ran 37 races with BJMM, with a best outing of 11th at Iowa Speedway.

Since entering NASCAR, Martins hasn’t been accustomed to change. Prior to the 37 races with BJMM, the only other team he’d competed with — with the exception of a Gander Outdoors Truck Series start at Daytona International Speedway in 2017 when he finished last with MDM Motorsports — was his family-ran Martins Motorsports team. That was a stretch of 38 races between the Truck and Xfinity Series.

Because of the abrupt change to MBM entering the race weekend at Watkins Glen International, it caused Martins to be a tad nervous.

“I was nervous showing up and getting in that car,” Martins told Fronstretch recently. “This is nerve-wracking for me. This is a whole new crew, they don’t know anything about me. They know that I run hard and they’ve seen me race for a few years, but you want to do a good job for them.

Through the first month of the pairing, Martins has a best finish of 18th at Mid-Ohio Sports Car Course. He also has two DNFs, more than he had in nine races with BJMM this season.

Not finishing races was one of the parts that made Martins nervous. This season, MBM has had 45 DNFs in 89 starts, some which have been start-and-park efforts.

Martins himself had a mechanical failure at Bristol Motor Speedway when his No. 13 car was stuck in fourth gear in an attempt to avoid a wreck in front of him. He was able to limp around before bringing his Toyota behind the wall.

“I know Carl has struggled at times this year with some mechanical failures — that happens,” Martins added. “He went through a run of bad luck in this thing. He’s also shown a lot of speed at times with that [No.] 42 car and with Timmy’s [Hill] car.

“I look at that and I’m like, ‘When they’re firing on all cylinders, they’re doing a pretty good job over here.’ I see it as a good step forward.”

A step forward indeed. In the season opener at Daytona, MBM unloaded four cars off the hauler with plans to run four full-time teams this season. MBM is one of just three teams — the others being JR Motorsports and JD Motorsports — attempting to run four cars all season long.

Having a fourth car also attracted Martins to MBM. Why? His former team has just three teams with no plans of moving to a fourth, meaning there was less chance of strapping up behind the wheel.

“I feel like there’s more opportunity here with MBM,” Martins stated. “The biggest decision was they had four cars and BJ has three. BJ operates his team like a business just like everyone else does, and that [No.] 99 car that I was in is kind of the all-star car where he’s looking for funded drivers.

“Carl is doing the same thing. He’s definitely not closed down to that, but potentially, if he is to sell one of those rides, there’s another car. If I’ve sold a sponsor for a race or if I tell a sponsor I’ll be in a race with BJ, that was always kind of under fire. We always had a tenuous deal because I wasn’t bringing him hardly any money. It’s like, ‘You can run and you’ll keep my car up in the points, but if I get a better offer, I’m going to take it.’

“It’s like you’re racing, but maybe not. I had to schedule my life, work [driving instructor at Spring Mountain, owned by Ron Fellows] and racing really tenuously over the course of the past few years. It’s been a tremendous opportunity over there, but I think with Carl, it allows me to be a little more secure with the races I know I’m going to do, my schedule being a little more set.”

Martins said he first met Long in 2014 when Martins’ family team competed in the Xfinity Series. Reflecting back on that day, he remembers Long dooring him entering turn 3 while Martins was in a start-and-park ride at Iowa.

Moving forward, one of Martins’ goals is to meet everyone he can on the team. Prior to joining the company at Watkins Glen, he didn’t know many of the crew members besides Doug Richert, who has served as his crew chief for three of the four starts.

“I really didn’t know anybody over here,” Martins said. “It’s literally starting from scratch. I feel like a rookie showing up, and this is my audition. When a guy comes to you with an opportunity like Carl did with me, you want to prove him right. You want to show that it was the right call to bring me in.”

With a finish of 25th at Road America — despite running in the top 15 for a lot of the race — four of Martins’ starts with MBM are complete. Originally, there was six races on his schedule, though he’s been given the nod to run the No. 13 this weekend at Darlington Raceway. He also expects to be in one of the MBM entry’s at Las Vegas on Sept. 14.

Oh, by the way, MBM Motorsports fields a part-time Monster Energy NASCAR Cup Series car (it has competed in eight races this season), which opened the eyes of Martins.

“I’m 32, I’m not getting any younger,” he said. “I see a lot of younger guys than me running in the Cup Series — guys with a lot fewer starts in the lower levels — and I know I’m experienced enough to go up there and get the job done at that level, especially for a small team. I know I can run hard, take care of equipment — I know I have a good reputation for that.

“There’s no other team in the Cup Series that wouldn’t be asking me to bring quite a bit of funding to try to make that step. With Carl, it’s way more realistic that I could be in a Cup car next year.”

Running a Cup race would be a change for Martins, too.