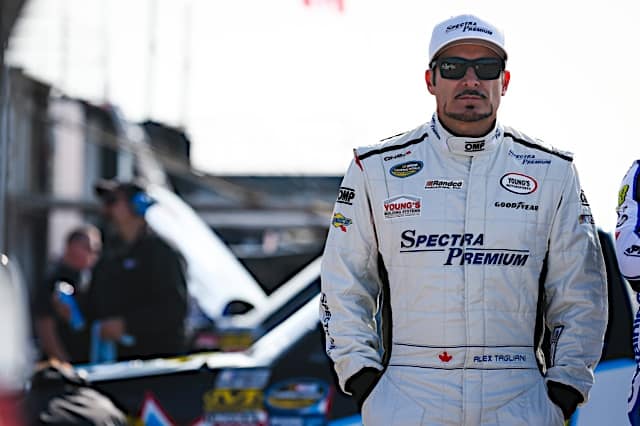 As the NASCAR Gander Outdoors Truck Series heads north of the border to Canadian Tire Motorsports Park, it has one of the shortest entry lists of the season with only 28 as of press time. Additionally, there will be six drivers who can be considered road course ringers, something that’s become a rarity on the Monster Energy NASCAR Cup Series side of the garage.

Reuse returns for the second straight year to run this race. He made last year’s start in a partnership with Jordan Anderson Racing. The Alabama native started 24th but retired to a 27th-place finish with a vibration after 35 laps. This year, he’ll drive Cory Roper’s No. 04 Ford.

While Reuse only has the single 2018 Truck Series start, he did run four road course races for the underfunded Mike Harmon Racing in the NASCAR Xfinity Series from 2014 through 2016. His best finish came in a 31st-place run at Road America in 2015. Meanwhile, Reuse is also a regular competitor in the Trans Am Series.

Reaume Brother Racing owner and regular driver of the No. 33 Chevrolet Josh Reaume knows first and foremost that his goal is for racing to be a business, and he’ll step out of the seat in favor of someone who has the funding to put the truck on the track. This time around, it’s Dan Corcoran, who will be making his Truck Series debut this weekend.

Corcoran has a single Xfinity Series start at Watkins Glen International earlier this season for Mike Harmon Racing. After starting 34th, he ended up 25th, though he was seven laps down in part because he was forced to pull off of the track before the race even started. The good news for the Canadian, though, is that he managed to avoid being involved in any of the incidents on the track.

Racing alongside Corcoran in the second RBR truck is White, who has a pair of 2018 starts for the organization. He ran 23rd in this race last season and finished the race two laps down. In his other start, which also came in 2018, he ended up 26th at ISM Raceway.

Earlier this year, White failed to qualify for the season opener at Daytona International Speedway, though he will make this race with only 28 on the entry list.

White has experience in the CASCAR Super Series and CASCAR West Series and 100 starts in the Pinty’s Series. In 100 Pinty’s starts, he has just 20 top 10s, most of which came during his full-time seasons from 2008 through 2013.

Klutt will be making his third Truck Series start this weekend. He made his debut with an 11th-place finish, piloting the Kyle Busch Motorsports No. 51 in 2016. The following year, he retired after 54 laps with suspension problems.

“This has been my favorite race weekend of the year since the Truck Series started coming up and running here,” Klutt said about his upcoming start. “The trucks have taken a couple of outings for me to really get the hang of, the differences being radial tires, truck arm suspension and better aero. These trucks feel quite a bit different than our Pinty’s cars, so I’m anxious to get out for the first practice session and get up to speed.

“I’m excited to be working with Niece Motorsports and crew chief Kevin Eagle. I think that we have a good shot at this race. I feel that as I mature, I just keep learning this track and how to extract speed from it. I think that really showed this spring here at CTMP.”

Currently, Klutt runs a part-time schedule in the Pinty’s Series. He has a single win and 26 top 10s in 40 career starts.

For the fifth straight year, Tagliani will head to Mosport for a one-off Truck Series start, and this time it comes behind the wheel of the No. 51 Toyota that’s gone to victory lane six times already this season. In his first two races, he ran for Brad Keselowski Racing and started on the pole. And while he ended up 16th in 2014, he posted a career-best fifth-place run in 2015. Fast forward to 2017 and 2018 and Tagliani drove for Young’s Motorsports, finishing 19th and 10th, respectively.

Additionally, Tagliani has eight Xfinity Series starts, seven of which came on road courses, spanning across six seasons. He’s started on the pole four times, and while he’s never won, he has a trio of second-place finishes, all for Team Penske.

Tagliani is a regular competitor in the Pinty’s Series where he has nine wins, 35 top fives and 55 top 10s in 80 starts.

Reuse (yes, brother to Roger) made his series debut in 2017 behind the wheel of the No. 50 Chevrolet for Beaver Motorsports. He started 27th and ended up 17th by the time the checkered flag flew. Last season, he made a single start at Iowa Speedway but fell out to a 25th-place finish after 136 laps with suspension issues.

He also has a trio of starts for Mike Harmon Racing on the Xfinity side of the garage, though his best result there was a 24th-place run at Mid-Ohio Sports Car Course in 2014.

With the exception of maybe Tagliani, it’s highly unlikely any of these ringers will get to play spoiler this weekend for the playoff contenders. But you can bet they’ll put everything they’ve got into their limited seat time. And if the cards fall right, you never know what might end up happening.