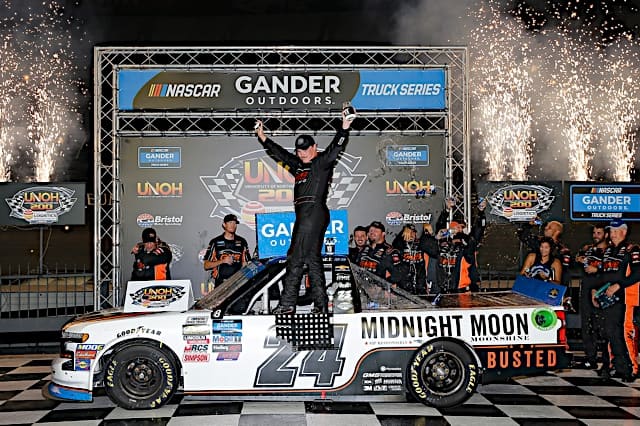 In a Nutshell: Brett Moffitt emerged from the chaos that was the Gander Outdoors Truck Series playoff opener at Bristol Motor Speedway with his third victory of the season. Following a short red flag period and the seventh caution in the final stage, the defending champion struck first with a nearly one-second victory over Chandler Smith.

Ross Chastain recovered from a pit road penalty at the end of stage two to finish third. Meanwhile, Stewart Friesen, who was officially involved in two late-race incidents, and Grant Enfinger rounded out the top five.

Sheldon Creed started at the rear of the field following unapproved adjustments after ignition problems during qualifying and ended up sixth. ThorSport Racing teammates Matt Crafton and Ben Rhodes finished seventh and eighth, respectively. Todd Gilliland and Austin Hill rounded out the top 10.

Polesitter Moffitt led the first 10 laps at the drop of the green flag before Chastain made the move and took the top spot and remained there to win stage one. When the field restarted for stage two, Moffitt once again claimed the lead and the two swapped the top spot for the remainder of the stage before Moffitt came out on top with a thrilling pass on the high side while the two attempted to navigate heavy traffic ahead of them.

He made it stick!@Brett_Moffitt steals Stage 2 coming to the green and white checkered flag! pic.twitter.com/geSeOhpuj9

During the stage break things changed for Chastain when a crew member fell trying to grab a tire that had come off  the No. 45 Chevrolet and his hand hit pit road. Officially, it was called a safety violation, though essentially it was for too many crew members over the wall, a call that’s drawn quite a bit of ire from fans and teams alike in the past. The resulting penalty put Chastain at the tail end of the field for the stage three restart, leaving him to race his way through the field if he had any chance at winning.

By the time the checkered flag flew, Chastain had moved all the way up to third and potentially could have done more if not for seven cautions and a red flag to slow the field in the final stage. On his way toward the front, Chastain raced in true old-school Bristol fashion, beating and banging through the field, and definitely upsetting quite a few drivers along the way.

He battled with Raphael Lessard, who’s running a part-time schedule for Kyle Busch Motorsports, multiple times, with one resulting in Lessard spinning out.

Aggressive moves lead to an amazing save by @RossChastain! pic.twitter.com/WWavBwXsuj

Meanwhile, we go back to caution as the No. 46 gets spun. pic.twitter.com/D0FrvzTMMa

Of course, those two incidents likely led to this confrontation post-race.

.@BMSupdates always leaves us with some relationships to mend. pic.twitter.com/qRw3EonEes

Then, there was the three-wide squeeze with Ben Rhodes and Sheldon Creed that I’m surprised didn’t turn into a wreck.

Straight back to racing and there's no stopping @RossChastain! pic.twitter.com/N2uZiK8ZG9

As expected, several drivers and crew chiefs approached Chastain after the checkered flag flew. And Chastain didn’t pull any punches in his post-race interview either.

When it comes to drivers upset with each other on the track, the bottom line is that crew chiefs need to let their drivers fight their own battles. Ultimately, crew chiefs are held responsible for their driver and team members’ actions, but in the heat of the moment following contact on the track, drivers should be left to handle their own problems.

With that said, Chastain may have just put a large target on his back for the remainder of the playoffs. While it’s easy to brush off the multiple incidents and his attitude about it as typical Bristol, payback could come as early as next weekend when the series heads off to Canadian Tire Motorsports Park. Whether there will be any retaliation later remains to be seen, and those outside the championship battle would be best served to let it play out without getting involved unless it’s nowhere near obvious payback.

Another Tough Outing for DGR-Crosley

Just one race removed from a late wreck that took out all three of its trucks in one swoop, DGR-Crosley once again had a race it would rather forget. In fact, a tweet that was later removed even stated: “I don’t think our night could end any other way, tbh… what a day.”

It began with Dylan Lupton, who was collected when Brennan Poole pushed Tyler Dippel into the outside wall and sent him spinning down the track and into the No. 15 Toyota.

Though the team attempted to repair the damage, it wasn’t able to and Lupton retired under the Damaged Vehicle Policy established by NASCAR last year that limits the amount of time teams have to make repairs and reach the minimum speed before being forced to the garage area.

.@LuptonDylan has been checked and released from the infield care center. His night at @BMSupdates is over due to significant damage to his No. 15 Tundra. pic.twitter.com/xyklIxfv1X

Natalie Decker brought out the caution almost immediately after the field went green once again following Lupton’s wreck with a single-truck spin. She was able to continue until later when she ended up in the outside wall, presumably after contact from Dippel, who suffered extensive damage once again.

The No. 54 gets into the wall. pic.twitter.com/sNQVem8Ku7

If that’s not enough, Decker managed to spin while the tow truck pushed the No. 54 Toyota back to pit road.

Decker spun by the wrecker. pic.twitter.com/vxAQqvsAc2

Tyler Ankrum was the best of the bunch, if you will, as he was the only driver running when the checkered flag flew, albeit six laps off the pace. He struggled early with power, suffered tire chatter and then stalled on the track and had to be pushed back to pit road.

The No. 17 of @TylerAnkrum needs assistance from a wrecker as his truck has shut down following a stop. pic.twitter.com/PKSfJduWlQ

After starting sixth, Johnny Sauter looked like he might have a shot at turning around his recent string of bad luck. But contact with John Hunter Nemechek sent the No. 8 Chevrolet into the outside wall before he spun back down the track, clipping the side of Sauter’s No. 13 Ford.

He'll be fighting through adversity in the opening round of the #NASCARPlayoffs! pic.twitter.com/n8SLz1GSwJ

The damage was little enough, especially at a place like Bristol where aerodynamics aren’t as much of an issue, that Sauter was able to continue. He managed to hang onto the tail end of the field as the leaders fought for the top spot at the end of stage two while he remained on the lead lap.

Later, Sauter had a run behind Sam Mayer and Sheldon Creed when the pair suddenly slowed, forcing Sauter to make evasive moves. He didn’t clear the front end of Friesen’s truck and bounced off of the wall before continuing on without drawing the caution.

.@JohnnySauter gets bumped into the inside wall, but keeps it going! pic.twitter.com/rAt2xqYupC

Somehow, despite that damage, and likely directly because of the stage three carnage that slowed the field seven times, Sauter walked away with an 11th-place finish.

“My night was just ruined by myself. I got loose under the No. 8 (John Hunter Nemechek) truck and wrecked myself. It was a racing deal,” Sauter explained after the race. “It hurts me way worse than it hurts him. I just screwed up. My guys deserve better than that. Eleventh is better than not finishing, I guess. It’s just frustrating when you think you have a truck capable of winning and you make the mistake.”

The good news for Sauter is that he was able to salvage a decent finish but the bad news is that he finds himself precariously close to the cut line with just two races remaining until the Round of 6. With just a three-point advantage over Austin Hill and eight over Tyler Ankrum, Sauter will need every point he can get in the next two events to keep his championship hopes alive.

The No. 99 pushes the 21 of @sam_mayer_ out of the groove and into the wall! pic.twitter.com/l1qtaWGfe3

Fun night racing under the lights at Bristol. Took a 8 year old truck to a lead lap P14 finish for the @RBR_Teams. Those guys bust their butts just to get to the track every week. Thanks to @CooksCSystems and @TeamNightOwl62 for making it possible. pic.twitter.com/qZJta2nG5L

P2 at Bristol, was in position to win just needed to be a little better, thanks to all the fans that showed up we had one heck of a crowd! Thank you @ibuypowerpc @toyotaracing @kbmteam solid night! pic.twitter.com/vcUCbRn2G8

2019 Rookie of the Year Candidates:

Number of Rookies in the Race: 7

Rookie of the Race: Creed

Natalie Decker grabbed headlines for all the wrong reasons during Thursday night’s race (see above). But what added insult to injury was when FOX Sports 1 went to team audio following her wreck that led to the 11th caution on the day, she was being scolded for not listening to her spotter.

The following is Decker’s in-car audio from this point in the race, though be warned that some might find the language offensive.

Points Update: Moffitt’s win gives him an automatic berth into the Round of 6 in his attempt to become the second driver to win back-to-back championships in the Truck Series. He also holds a 16 point lead over Chastain, who moved up three positions. Friesen remains third, followed by Enfinger, who dropped two positions to fourth. Crafton, up one position, rounds out the top five.

Despite a race where he was involved in multiple incidents and brought home a significantly damaged truck, Sauter gained one position and sits sixth. He holds a slim three-point margin over Austin Hill, who dropped three sports to seventh. Ankrum, following a race that featured multiple issues for the No. 17 team, remains eighth. Hill and Ankrum have two more races to put themselves in position to keep their playoff hopes alive.

Ben Rhodes expanded his advantage over Harrison Burton to 27 markers and currently sits ninth. Todd Gilliland and Sheldon Creed round out the top 12. Creed, who’s within 58 points of Rhodes is the last driver to have anywhere near a realistic chance of moving up as high as ninth in the standings over the next six races as Tyler Dippel in 13th faces a 192-point deficit.

Driving incredibly fast race trucks from these Niece boys and girls is a dream come true!

Wish this little fella under the “r” in @CarShieldUSA woulda showed up a little earlier though. pic.twitter.com/0OkICTDI7G

Charged hard from the back to 6th, thank you @GMSRacingLLC @TeamChevy, feel like I’m getting my Mojo back the last few weeks!

Perspective from ⁦@BMSupdates⁩ I’m grateful to have ⁦@DGR_Crosley⁩ in my corner, I take nothing for granted, our hard work is what got us here and it will payoff!!Thank you fans, friends and family! Digging deeper than ever! #playoffs #NASCAR #maketodaygreat pic.twitter.com/tdUZoFkqUP

Broke a shock mount early and held on to about 12th for a while then it just got worst and worst. Bummer felt like we had a decent truck. Onto Canada

Up Next: The Truck Series heads north of the border for its only road course race at Canadian Tire Motorsports Park. Coverage for the Chevrolet Silverado 250 begins Sunday, Aug. 25 at 2:30 p.m. ET on FOX Sports 1; the race can also be heard on your local MRN affiliate or SiriusXM NASCAR Channel 90.