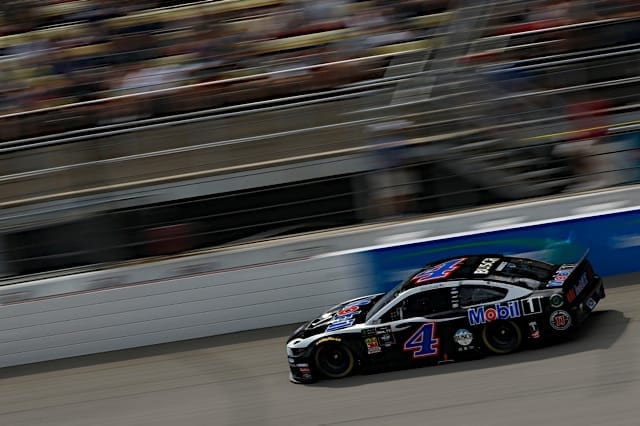 On the sports calendar, August means the start of college football season, an excessive amount of golf on TV, and the hunt for baseball’s playoff positions winding down.

NASCAR’s Gander Outdoors Truck Series solidified its playoff field with the regular season finale this weekend at Michigan International Speedway, Austin Cindric is looking like a possible darkhorse contender for the Xfinity Series championship, and a longtime titan could fall in the Monster Energy NASCAR Cup Series.

Besides, Sunday’s race ended in a fuel run, which has an element of the slow, long-simmering tension common to ballparks and America’s pastime. While fans are divided over whether that makes for a good race or not, it seemed to be the case for the Consumers Energy 400, and the final innings of the regular season are filled with jockeying for the final spots in the playoff bubble.

Martin Truex Jr‘s hot streak continued, as his fourth-place result was his fourth straight of sixth or better, while he has four wins, three stage wins, 10 top fives and 15 top 10s

Tire troubles ended Jimmie Johnson‘s hopes for a good day, en route to a 34th-place finish, eight laps down. He’s dropped outside the playoff cutline, and in the past five races his best finish is 15th. For the season he’s averaging a 16th-place result.

Kevin Harvick has very quietly slipped into the playoff discussion as a possible title favorite, picking up his second victory in a month to go along with four poles, four stage wins, seven top fives and 15 top 10s with three races left in the regular season.

Contact with Paul Menard left Clint Bowyer in the garage with a wrecked race car, clocking in at 37th in a 38-car field. It was his sixth DNF of 2019, and his seventh finish of 20th or worse since Charlotte (11 races). For the present, he’s still in playoff position, holding the 16th and final spot.

Chase Elliott excels at Michigan. In eight Cup starts, he has three top fives and seven top 10s, with a runner-up and another top 10 in his two Xfinity starts there.

While a severely damaged right front didn’t end Aric Almirola‘s day, he was never a factor and finished seven laps down in 33rd. While 10 top 10s is solid, as is an average result of 15th, it’s a step backwards in his second year at SHR, and what might be more concerning is that his best finish since the July Daytona race is 11th (New Hampshire).

Paint Scheme(s) of the Week

One more practice left @MISpeedway to get our @meijer @Surfacesuncare 36 dialed in.

Watch #happyhour live on https://t.co/1Yms8ag6tQ at 11:30am. But until then, tweet your questions for me & the @NASCARonNBC crew you and may just have it answered live ??#NASCARFanPractice pic.twitter.com/gj6epKNK74

Matt Tifft wins Paint Scheme of the Week this time, because the red, white and blue scheme of his No. 36 Front Row Motorsports Ford Mustang looked fantastic. The red trim worked really well in this design. Meijer, his sponsor this week, is a regional grocery store chain in the upper Midwest.

This is a very old picture, but Bowyer was sponsored this week by One Cure, an initiative of Colorado State University Vet Med that is seeking to eliminate cancer in animals, and ideally through that process significantly lessen it in humans as well. That’s a very worthy cause. Also, the green, gold and white work just as well on a racecar as they do on jerseys and uniforms.

Menard’s No. 21 Mustang for Wood Brothers Racing had a special design honoring mechanics, which is a really cool idea. Unfortunately, the design is pretty awful.

This firesuit was … interesting? It was commemorating Truex’s 500th start in the Cup Series in a career that began in 2004 with the Dale Earnhardt Inc. No. 1 Chevy.

We know SO MUCH about drivers because of our NASCAR insider, but … #WhatAboutBob?@ClintBowyer interviews @bobpockrass (and it's awesome) pic.twitter.com/qii7N4GRFv

Bowyer did a fun TV segment with Fox Sports’ Bob Pockrass, flipping the script a bit as the interviewer for a change.

I'd love to see a greater contingent of road courses in the NXS.

Maybe 10 over the course of the season. A street course perhaps. Give it an identity. Lean the trucks towards the "dirt track/ short track" side. Make Xfinity more specialized.

I don’t know that the Xfinity Series needs quite as many road courses as my colleague Frank Velat suggests, but it’s an interesting idea, and he’s right that it would give more personality to the series.

All divisions of NASCAR national series racing are represented at Bristol Motor Speedway along the Tennessee-Virginia border this weekend, with a full weekend of action at the high-banked half-mile known as the Last Great Colosseum. It’s almost a given that tempers will flare.

The Truck Series takes to the track with the UNOH 200 presented by Ohio Logistics on Thursday, Aug. 15 at 8:30 p.m. ET, with TV coverage on Fox Sports 1. It feels like the sponsors of this race ought to have sponsored last week’s Xfinity Series event at Mid-Ohio, but anyway, look for Johnny Sauter to get back into the win column.

The Xfinity Series takes a break from road courses with the Food City 300 on Friday, Aug. 16 at 7:30 p.m. ET, with TV coverage on the NBC Sports Network. Christopher Bell should win.

In Cup, Kyle Busch gets another checkered flag. The Bass Pro Shops NRA Night Race will be Saturday, Aug. 17 at 7:30 p.m. ET, with TV coverage on the NBC Sports Network.