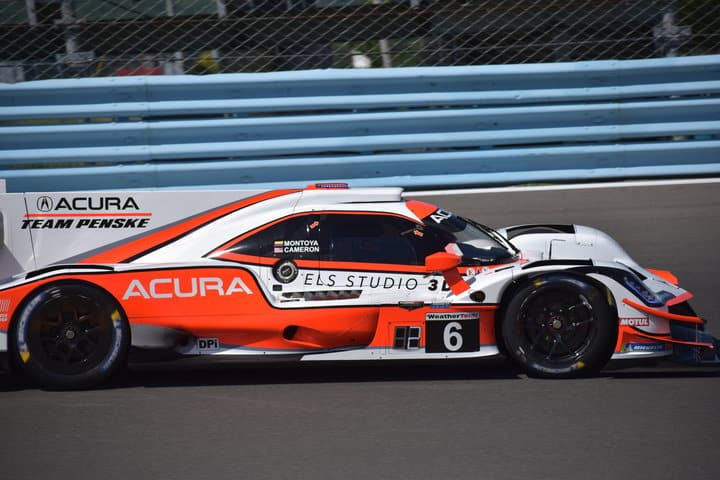 Acura Team Penske’s No. 6 team was the team to beat Friday at Road America.  Dane Cameron was fastest overall with a lap at 132.472 mph during opening practice for Sunday’s IMSA Road Race Showcase.

Cameron’s fast lap of the day came relatively early in the session.  That allowed the rest of the field to take shots at it.  No one was able to beat it, but CORE autosport’s Colin Braun came closest.  Braun’s best lap in the Nissan DPi was just two-hundredths of a second slower than Cameron.  Ricky Taylor was third quickest in the second Acura, followed by Action Express Racing’s Felipe Nasr in the fastest of the Cadillacs.  JDC-Miller MotorSports’ Tristan Vautier was fifth quickest.  LMP2 saw Performance Tech Motorsports’ James French fastest with a lap at 128.047, good for 11th overall.

GT Daytona saw Riley Motorsports’ Jeroen Bleekemolen was fastest in his Mercedes with a lap at 115.602 mph.  This lap was only four-hundredths of a second faster than Paul Miller Racing’s Bryan Sellers.  Park Place Motorsports’ Patrick Long was third quickest in his Porsche, while AIM Vasser Sullivan’s Jack Hawksworth was fourth in the No. 14 Lexus.  Dennis Olsen, who won with PFAFF Motorsports at Lime Rock, was fifth quickest in the Wright Motorsports Porsche.

In the late afternoon practice session Friday, the No. 6 Acura ARX-05 was once again on top.  This time, it was Juan Pablo Montoya that was fastest with a lap at 132.172 mph.  The lap was just three-hundredths of a second faster than Taylor.  Mazda Team Joest’s Oliver Jarvis was third quickest, followed by his teammate Harry Tincknell.  Braun was fifth in the Nissan.

LMP2 saw PR1 Mathiasen Motorsports’ Matt McMurry fastest with a lap at 129.201 mph, the fastest LMP2 lap of the day.  The lap was three-quarters of a second faster than French.

GT Le Mans saw Porsche GT Team’s Earl Bamber top the chart with a lap at 118.972 mph.  The two Ford Chip Ganassi Racing IMSA Ford GTs were second and third, led by Ryan Briscoe.  Corvette Racing’s Jan Magnussen was fourth, while Tandy was fifth.  The top five was separated by a little more than three-eighths of a second.

GT Daytona saw Hawksworth turn in the best lap of the day in class at 116.432 mph to top the chart.  Hawksworth’s lap was nearly a half a second faster than Sellers’ Lamborghini.  Riley Motorsports’ Ben Keating was third, then the BMW of Turner Motorsport’s Bill Auberlen.  Meyer Shank Racing with Curb-Agajanian’s Trent Hindman was fifth in the fastest of the Acuras.

Both sessions were clean.  No red flags and no major incidents.

IMSA WeatherTech SportsCar Championship teams will be back on-track bright and early Saturday morning for practice at 8:55 a.m. local time.  This session will be 60 minutes in length.  Qualifying is scheduled for 12:35 p.m. local time and will be streamed live at IMSA.com and FansChoice.tv.