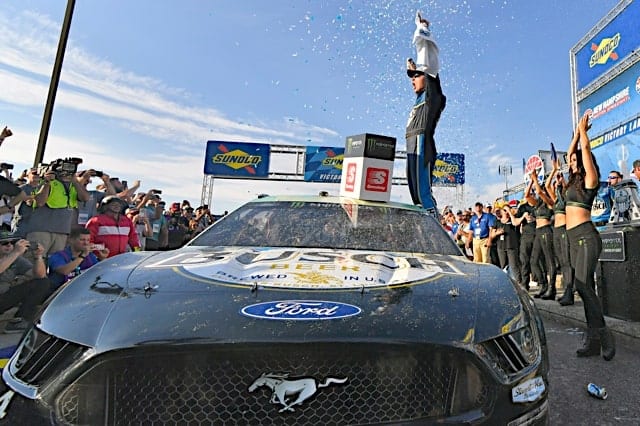 For Kevin Harvick, everyone knew it was coming. We just didn’t know when.

New Hampshire was when.

Harvick broke a 22-race winless streak and the first for his Stewart-Haas Racing team in 2019.

While Harvick was in victory lane, Denny Hamlin and Kyle Busch were frustrated over their races as Hamlin led 113 laps but took four tires while Harvick took two on the final pit stop of the day. For Busch? He led most of stage one and some of stage two before getting a tire rub and spinning out, which made his car never function the same.

How did all of this-and Harvick getting his first victory of the season-fair in this week’s power rankings? Find out below.

It seemed like it was going to be another regular day in the world of Busch. After dominating all of stage one and most of stage two, Busch got collected in an incident in which he had a tire go down and spun out to cause a caution. His day was just never the same after that, and the No. 18 ended up finishing eighth.

On to Pocono to see if they can sweep the year at the Tricky Triangle.

Logano scored his first career win at New Hampshire in 2009, and, while he was trying to win another lobster, it just wasn’t to be. Logano was up in the bottom half of the top 10 all day long and ended up with a ninth-place finish. Solid day for the 22 squad.

Hot day at my home track at @NHMS. My No. 22 #AAARacing Ford Mustang crossed the finish line P9. On to @poconoraceway pic.twitter.com/xwpRUy1FKR

If there was one word to describe what Harvick fans were going through, “finally” would be a fair answer. Harvick snapped his 22-race winless streak as well as getting his team’s first win of the season.

Also, who was there to celebrate with him? His son Keelan. Keelan also decided he wanted to kiss the lobster after the race!

If this were an ice cream bar, Keelan would have went straight in for the kiss.

A little hesitation, but he stood by his word. ?? // @KevinHarvick // @NHMS pic.twitter.com/4xDpic9rI2

“Has to hope his team takes good care of the trophy this time (after one trophy breaking at his home).” – Joy Tomlinson, Frontstretch

For Hamlin, it was what could have been. Hamlin was hungry for his third win of the season and went for it in turns one and two on the white flag lap. It just wasn’t enough as Harvick was able to hang on for his first victory of the season. Tough break for Hamlin but at least he has two wins on the season.

“Either choked that win away or he’s just scared of lobsters.”- Jake Baskinger

For Martin Truex Jr. his sixth-place run was a nice comeback after his day. Truex was involved in an incident with the Clint Bowyer after a restart that saw both drivers receiving damage. Bowyer wasn’t as lucky as Truex was as he finished all the way back in 20th.

P6 with a banged up @SIRIUSXM Camry. Felt like we had a car capable of winning before that. Oh well, on to Pocono. #TeamToyota pic.twitter.com/h22l6K9l46

For Keselowski, it seemed like things were going his way. He won his first pole since 2017 and was up front for most of the first stage. As he fell back through the field, however, he lost precious track position and was never able to recover.

Retweet to congratulate Brad @keselowski and the 2 Crew on their Magic Mile POLE!

After getting his first win of the season, Busch was kinda invisible all day at New Hampshire. On the bright side, he didn’t suffer the same fate as teammate Kyle Larson, with Larson’s day ending prematurely.

Unraveled like a ball of yarn at the end. Disappointing finish to a decent run most of the day. pic.twitter.com/lWwFDio0b1

“If he wins the championship, the team will carry the car to Victory Lane” – Kelly

After a fairly slow start to the season, Blaney has gotten to that point where he is rallying off top fives and top 10s, but still no wins. He does have a win at the next track (Pocono), so maybe he will break through and get the monkey off of his back.

I’d probably do it for nothing. https://t.co/Lq7bDHJHcu

“He is so close to getting his first win of the season. He’ll get it sooner than later. ”- Baskinger

Last week’s ranking: UR (UR)

For Jones, the pressure is evident as he was involved in an incident with Ricky Stenhouse Jr. in the middle of stage two. With the No. 20 team being the only one in the Joe Gibbs Racing camp without a win, Jones took the track position instead of four tires at the end of the race, and it ended up working as the Michigan native finished third in New Hampshire.

A good day @NHMS. We got stage points in the 1st stage and finished 3rd. The @stanleytools Camry was good. All day I felt like we were close, just needed to get up front and never quite did but we were close. Another top 5. Can’t complain about that and the points we gained. pic.twitter.com/UJh6aShjuL

To say it was a rough weekend for Bowman would be an understatement. He broke his driveshaft in qualifying, forcing his crew to switch to a back-up car. Then in final practice, he got into the wall and was forced to use teammate Jimmie Johnson’s backup car since they didn’t have a third backup car. Bowman persevered, though, and salvaged an 11th-place finish.

It’s safe to say that Bowman is ecstatic to leave New Hampshire in the rearview mirror.

This weekend in a nutshell pic.twitter.com/dUNXQHtq0e

While two of his teammates wrecked in qualifying and practice, Elliott was a mystery the entire weekend as he just couldn’t find the balance to run up front with the leaders.

Take another look at what happened with Daniel Suarez and Daniel Hemric.

Chase Elliott had water pump issues, and Suarez and Hemric were right behind him. pic.twitter.com/EunB2Tj3dg

While his teammate was in victory lane, Almirola was trying to figure out where he went wrong on Sunday. The Florida native, like Elliott, just didn’t have the speed or the balance to compete with the leaders. He did opt for track position late in stage two and took the win, adding to his playoff points.

Glad we came away with a stage win, but in the end, we lost track position and just couldn't recover. Congrats to @KevinHarvick on the win today. Glad a @StewartHaasRcng team brought home the victory. ?#SmithfieldRacing pic.twitter.com/IMbJDSLsns