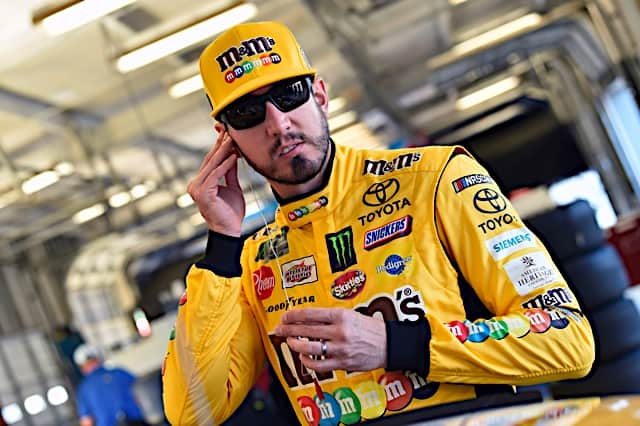 It’s time for some NASCAH racing (er, NASCAR) at New Hampshire Motor Speedway up in the northeast. The Monster Energy NASCAR Cup Series heads to Loudon, N.H. for the Foxwoods Resort Casino 301 on Sunday, July 21 at 3 p.m. ET. Get your fantasy NASCAR DraftKings rosters ready!

As is the case at tracks less than 1.25 miles and road courses, cars will use the sport’s higher horsepower package with no aero ducts. The PJ1 traction compound is on all the turns at this one-mile oval with the second lane open. Also, keep in mind tech inspection will be before the race on Sunday. Any cars that fail twice will go to the rear of the field at a track where passing is historically difficult. Check to see if you need to make any adjustments to your roster prior to race time.

You more than likely will need someone starting near the front if you wish to cash in your contests. That driver should be capable of leading laps, as well as posting the fastest lap. In past races at Loudon, multiple drivers had at least 10 fastest laps, with many starting in the top half of the field. One exception was Kyle Larson two years ago, where he began the race in last. I’ll have more on that later.

Now, here are my picks!

After last week’s battle with his brother, Kyle Busch heads to a track where he’s been successful. Busch last won here when NHMS still had a playoff date in 2017, one of three career victories on his resume. Out of the past 11 races here, he’s only finished outside the top 10 twice, and only one of those was awful (37th). He’s been extremely fast all year and I don’t see him slowing down anytime soon.

Starting second on Sunday, Busch has the track position to run up front early. If he can pass Brad Keselowski on the start, he could earn you bonus points for each lap and fastest laps in clean air during the first stage. Busch may be the most expensive driver on DraftKings, but he’s earned it. If you can find a way to fit him into your lineup, he could help you win big.

I learned an amazing stat about Truex for this article: he’s led 744 laps in his career at New Hampshire, yet hasn’t won here. So even though it would be nice to get those extra points for the winner, Truex can still help you get in the green and win some money on your DraftKings lineup.

He has four straight top-10 finishes at NHMS, including three top fives. Busch’s Joe Gibbs Racing teammate has been fast all year and turned up the heat since Richmond in April. He has four victories so far this season and could easily double that total by the end of the year.

So even if Truex simply leads laps, that could greatly benefit your lineup. Make sure you have either Truex or Busch on your roster; just know it’s difficult to fit both drivers, since there’s not as many value plays this week.

Keselowski won the pole for Sunday’s race and can earn you extra points for laps led if he can jolt ahead of Busch. As you’ll recall, back in March he led 446 out of 500 laps at Martinsville, easily a season-best total for any driver at a racetrack.

That flat-track Paperclip has about the same banking as New Hampshire’s Magic Mile, so Keselowski very well could do something similar here. Either way, he has a fast car and is likely to earn you bonus points for fastest laps. He also has three top 10s in the past four races here; ignore his 32nd-place run from 2018.

After pushing his Chip Ganassi Racing teammate to the front last week and earning a fourth-place finish, Larson looks to build on that momentum from Kentucky Speedway. He starts 15th Sunday, so he’ll have some work to do at New Hampshire. But I believe he has a fast enough car to get near the front by race’s end. If Larson does, he’ll earn you some much needed position differential points, a feat he’s accomplished many times before. For example, he started dead last in the July 2017 edition of this race and worked himself up to second by the finish.

This driver’s finished runner-up three times at Loudon, in fact, including twice in the previous three races. It’s one of Larson’s better tracks, so as long as he avoids any wrecks in front of him, he can work through traffic and get to the front.

While Byron only has one previous start here, he’s shown fairly good results at the higher-horsepower tracks this year. At Dover, another one-mile track, he finished eighth after starting second. Last week, he battled Clint Bowyer for the lead at one point, but was penalized for jumping the start. Byron wound up 18th with a car that could have finished far better.

If Byron can avoid mistakes like that at New Hampshire, he could find his way to the front again despite a rough qualifying effort (22nd). It might be harder to pass here, but he does have a fast enough car and experienced crew chief Chad Knaus at his side. He’s also cheap enough to pair with a more expensive driver like Kyle Busch.

Still not convinced on Byron?  His teammate, Alex Bowman, is another cheap Hendrick Motorsports alternative since he qualified in the back due to a broken driveshaft.

I picked Menard for his ability to finish just ahead of where he starts. You need those extra position differential points to do well in daily fantasy. For example, in both the 2016 and 2017 summer events at Loudon, Menard finished 18th and 22nd after starting 24th and 29th. That net gain of +6 and +7, respectively, could make the difference in a winning lineup.

This season, Menard has four straight races where he finished better than where he qualified. Last week at Kentucky, he started 14th and wound up 11th by the checkered flag. A steady, consistent driver, Menard could be a sneaky play to fill out your fantasy roster.

Ty Dillon is my Dark Horse Performer because, like Menard, he can end the race ahead of where he started. In fact, at his three previous races at New Hampshire, he finished them all better than where he began. In both 2017 races, he finished nine and eight spots higher, including a 16th-place result in July 2017. Also, Dillon seems to do OK at the short tracks this season. At Martinsville and Bristol, he started 22nd and 24th and ended it in 13th and 15th. He even won the first Cup Series stage of his career at Bristol.

Dillon starts Sunday’s race 18th, so it’s a bit more risky, but he’s still capable. It’s a fairly inexpensive play to put at the back of your roster.