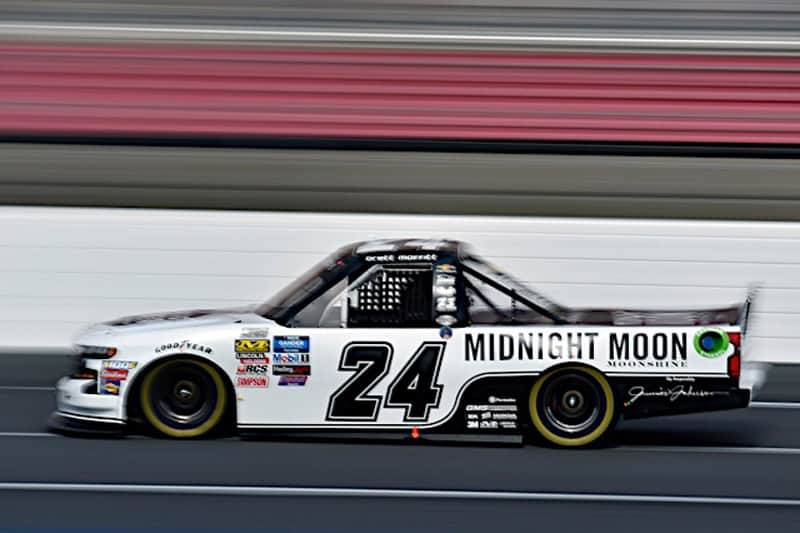 Moffitt and Nemechek will team up with Johnson’s Midnight Moon brand to promote a limited edition reality label that will come to life on their app on smart phones. Midnight Moon will be on Moffit’s Gander Outdoors Truck Series ride, as well as Nemechek’s Xfinity Series entry, at Bristol Motor Speedway in August.

“We couldn’t think of a better way to support the Midnight Moon Moonshine Busted label introduction than to marry Junior’s old-school roots in racing at Bristol with the new-school capabilities of the GMS race teams,” Joe Michalek, president and founder of Piedmont Distillers, said in a press release.

“Our goal is to celebrate Junior’s moonshine and racing legacy with NASCAR fans and what better place than Bristol Motor Speedway.”

They will also be promoting the brand on social media, where some lucky fans can win a chance to join the GMS teams in Bristol.

“I’m excited to have Midnight Moon back with us at Bristol,” Moffitt added. “The new promotion they have is a cool way to tell some of Junior Johnson’s story, and to have a connection to a NASCAR legend like him is awesome. Sipping some Midnight Moon Moonshine in victory lane would be the perfect way to celebrate.”

Moffitt has two wins this season in the Truck Series. Nemechek is in his first full-time Xfinity Series season, currently sitting ninth in the standings.

“Junior Johnson is a NASCAR legend, so it’s pretty cool to have his brand on our car at Bristol next month,” Nemechek said. “Growing up in a racing family I’ve heard a lot of stories about him and I’d really like to honor him by getting a win in the Midnight Moon Camaro.”