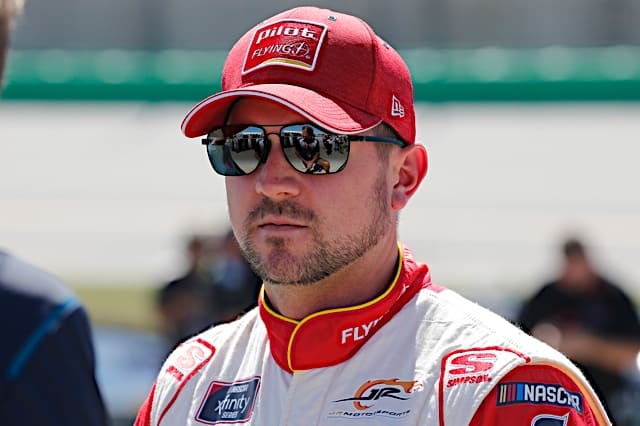 Coming into 2019, Michael Annett needed something to go right, as his 2018 was horrendous. Fast forward halfway through the season, it could be argued the Iowa native is the most improved driver in NASCAR, which includes a victory at Daytona.

Annett’s success continued on Friday evening (July 12) at Kentucky Speedway. The No. 1 team qualified 10th, but immediately gained a few positions, earning three stage points in the opening stage by finishing eighth. In the second stage, he clicked off four more stage points with a seventh-place finish.

But the final stage is where the No. 1 team shined, having a hard fought battle with Chase Briscoe for the majority of the final stage. With less than 20 laps to go, Annett got by the No. 98 car en route to a fourth-place finish, his fifth top-five finish of the season.

“We took off really good, [and had] a lot more grip than the other guys and passed four or five cars right away and then just kind of held our own,” Annett said of this race. “After the start of the second segment, we came down [pit road] when nobody else did – I guess they saw a rub on the right front of the set we took off at the end of the first [stage].

“The car kept getting better and better, just like yesterday. We would gain four-tenths throughout a practice session and ran our fastest lap [late] in the first and second practice session. [I] knew if the race went like it did with long green flag runs, we were going to be in really good shape.”

With the finish, Annett’s average finish through the opening 17 races is 9.7. At this point last year, the No. 1 team hadn’t even recorded a top-10 finish.

Because of the success, Annett’s confidence has continued to rise — scoring three top-five finishes in the past five races. At Kentucky, the No. 1 car was the highest finishing JR Motorsports, which had all four of its teams inside the top eight.

“It’s really high,” Annett said of his confidence level. “I’m able to be up there and see where they’re better, when I think I have a decent car in practice, where we’re like ‘Hey, we’ve got to find some speed.’ We call it the three-quarters mark or seven-eighths mark.

“I’m at least able to see that now in the race and am able to put a whole weekend together. That’s what you’re going to have to do to beat those guys and seeing where they’re better, rather than just saying, ‘Hey, they’re faster.’ I can do a better job in practice and put something underneath the car that we can tune on all night.”

Currently, Annett is seventh in the championship standings, right behind his teammates Justin Allgaier and Noah Gragson. The series heads to New Hampshire Motor Speedway next weekend where Annett has a best outing fifth ins even starts.