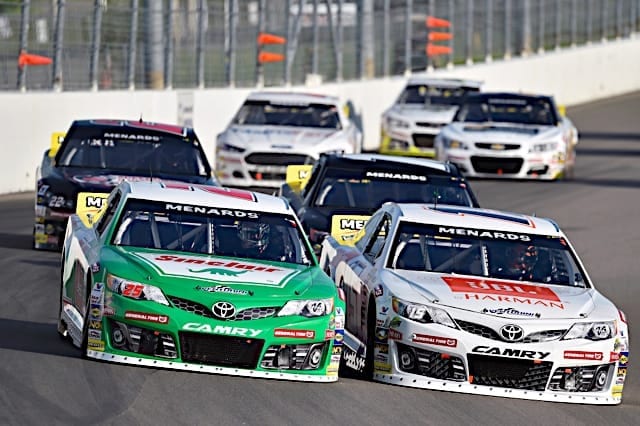 The ARCA Menards Series heads to Jolliet, Ill., for the Bounty 150 at Chicagoland Speedway on Thursday night (June 27).

The race at Chicagoland marks the final stop in a seven-race string that began at Toledo Speedway last month. That span of racing has brought together one of the tightest points races in recent memory, as Bret Holmes, Travis Braden and Christian Eckes are still in the running for the championship against Michael Self. There’s a 65-point split between first place Self and fourth place Eckes.

Last season, Self earned his third career victory at Chicagoland, and on Thursday, he’ll look to defend that victory. Venturini Motorsports has two straight victories in Chicago, winning with Christopher Bell in 2017. ARCA has been part of the Chicagoland schedule since the track’s beginning, dating back to 2001. A good chunk of the drivers who have won the ARCA race at Chicago have moved on to race in the Monster Energy NASCAR Cup Series, including Michael McDowell, Ty Dillon and Corey LaJoie. Other ARCA Chicagoland winners Scott Lagasse Jr., Ryan Reed, Chase Briscoe and Bell all currently race in national touring series.

Harrison Burton returns to ARCA after having successful runs in the NASCAR Xfinity and Gander Outdoors Truck Series. At Iowa Speedway, Burton finished third in Trucks and fourth in Xfinity. It will be his first race in ARCA since finishing sixth at Pocono Raceway earlier this month. Burton, along with Self and Eckes, will look to earn Venturini Motorsports their third straight victory at Chicago.

Ty Majeski makes his return to the series in pursuit of his third victory of 2019. Alongside Joe Graf Jr., Chad Bryant Racing will look to return Ford to its dominant stage it once held. The Blue Oval won four straight times at Chicagoland from 2013 to 2016. Corey Heim earned a fourth-place finish last weekend behind the wheel of the No. 22 that Majeski will take over Thursday night. Graf currently sits fifth in points, 160 points back.

Ty Gibbs finally earned his first career victory last weekend at World Wide Technology Raceway at Gateway, and Riley Herbst will look to pull that car’s momentum into a victory Thursday night at Chicagoland. In five races this season, Herbst has a best finish of second twice, coming at Talladega Superspeedway and Pocono. Herbst finished sixth last season at Chicago. Joe Gibbs Racing earned the victory in the Cup race last June with Kyle Busch, the first win for the organization at Chicago since Erik Jones won the Xfinity race in 2016.

Austin Wayne Self returns to ARCA for the first time since 2017. He’ll make his 48th career start in a series where he earned one career victory at Winchester Speedway in 2015. He has 13 top-five and 31 top-10 finishes in his career. He hasn’t raced at Chicago since 2015 where he earned his track-best finish of 12th.

I think there were only 17 or 18 at Madison recently. Car counts are way down. The Venturinis and Hillenburgs own most of the cars too. Have to wonder how long this series will be around….