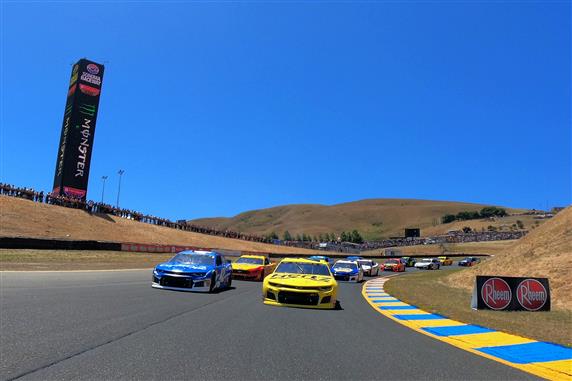 Martin Truex Jr. certainly has Sonoma Raceway figured out. With his third win in the last seven races at the California road course, Truex is now the winningest active driver and — thanks to a change in track layout — the only current driver to win on both the 1.99-mile short layout and the 2.52-mile circuit (Ricky Rudd also won on both courses). It was a statement win for Truex, who outraced his teammate Kyle Busch, who had fresher tires on the final run to take the trophy, matching Busch win for win so far in 2019.

Truex said after the race that the car “felt like it was on ice” as the tires faded, but he’s gained the reputation of being tenacious and very difficult to pass when he has the lead and smells the win.

While Truex was taking home the 23rd win of his career, Matt DiBenedetto was creating a milestone of his own: his first career top-five finish in the Monster Energy NASCAR Cup Series. Racing for underfunded teams, DiBenedetto hasn’t had many opportunities for great finishes, but when he has, he has capitalized. This time, he took home his career-best fourth-place result, and he got there by driving around the likes of Jimmie Johnson, Ryan Newman and Kevin Harvick.  It’s a finish that DiBenedetto should be proud of.  While his Leavine Family Racing team does have a technical alliance with Joe Gibbs Racing, it’s not at the level that Furniture Row Racing enjoyed, and this is a team that’s still new to the level of equipment they do have.

Did running the carousel layout make the racing better? It’s hard to say that it did, in that the race didn’t boast a door-to-door battle for the win or anything like that.  But the 1.8-second margin of victory was much closer than a year ago, when Truex cruised to the win by over 10 seconds.

What the added half-mile of racetrack did do was add a couple of places where drivers could close and pass, and it’s hard to say that’s not a positive thing.

On the other hand, while stage racing has, in reality, changed most races very little, it has not worked for road courses as it can actually take away from strategy.  Had it not been for the stage breaks Sunday, the race would have run caution-free.  Races like that demand teams think differently than races that feature several yellow flags.  Also, because pit strategy for road races is very different from ovals, some of that has been taken away with the stages. It would be hard at this point to eliminate the stages at the road courses, because of the points implications, the obvious solution would be to award the points without the caution breaks—score them as they run and keep racing.  That would be a fair solution that’s easy to implement.

Pole sitter Kyle Larson had a fast car this weekend, but he’s not exactly known for his road racing skills.  Larson has two poles at Sonoma but an average finish of 19th and a top result of 12th. Once the green flag dropped, Larson fell back through the top 10 almost from the get-go, but was able to save his equipment and, after running in the mid-teens for much of the afternoon, came back to finish 10th for his career-best finish in wine country.

Active win leader Johnson had a strong car for much of the race.  He was inside the top five late in the race, but was less than pleased when the lapped car of Corey LaJoie forced him to use up his tires to get by, and it wasn’t long before Johnson fell victim to fresher tires from several cars, fading from the top 10 to 12th in the final three laps.  The finish also puts Johnson outside the playoff picture by just one point as the Cup Series heads to Chicagoland Speedway—one of just four tracks currently on the Cup circuit where Johnson has not won.

Two-time Sonoma winner Busch entered the day tied with Truex for the most Sonoma wins among active drivers. Busch may have waited a couple of laps too long to make his final pit stop, but there was no catching his teammate on the final run, and while Busch cut Truex’s 6-second lead after stops down to under one second as the pair negotiated lapped traffic, but in the end could not catch his teammate and had to settle for second.

Last week’s winner Joey Logano wasn’t a factor for the win, but battery problems inside 15 laps to go put the final nail in the coffin for Logano’s bid. Forced to pit road, Logano had no hope of salvaging much from the day. He came home 23rd, tying his season-worst result from Atlanta.

Another race, another win for Joe Gibbs Racing. JGR and Team Penske have combined to win 15 of 16 races so far in 2019.  JGR has 10 wins among three drivers (Truex, Busch and Denny Hamlin), while Penske has five between Brad Keselowski (3) and Logano (2).  The only team to break up the party was Hendrick Motorsports with Chase Elliott’s Talladega win.

It was the same story a year ago, when at the same point in the season, JGR (and satellite Furniture Row Racing) and Stewart-Haas Racing held all the cards except for Talladega, where Logano took the victory.

But it bears repeating: this is nothing new, and it’s not bad for NASCAR in itself. While it might be more fun to have different winners, the sport has survived similar situations plenty of times.

In the short term, the seeming predictability isn’t fun for fans of anyone but the drivers who are winning, but this too shall pass.  Last year at this time, it seemed like the title would be decided among three drivers—until the eleventh hour in the playoffs when the fourth inserted himself rather forcibly into that conversation.  Which one of the so-called Big Three won the title at Homestead? Oh, that’s right, none of them.

In other words, two weeks shy of halfway in the season, there’s time for things to change.  A year ago, they did change, even before Logano’s title, because different drivers heated up during the summer and early fall. It’s not over by a longshot.

While it didn’t happen in Sunday’s Cup race, it’s pretty hard to talk about the weekend in NASCAR without mentioning Ross Chastain.  Down an out a week ago after having a NASCAR Gander Outdoors Truck Series win stripped at Iowa Speedway after his truck was found to measure too low after the race, Chastain entered Gateway in an unenviable position, having to win a race and climb into the top 20 in points with just a handful of races remaining to do so in order to secure a playoff spot. The Truck Series playoffs start at Bristol in August.

So what did Chastain do?  He went out and finished first again, only this time, the win stuck.

Running for a team that had zero Truck Series wins before 2019, Chastain is an unlikely hero, declaring his intent to race for the series title just a couple of weeks ago for a season that was supposed to be his breakout year before an Xfinity deal with Chip Ganassi fell through. He’s still 38 points out of the top 20, but most of the drivers he has to pass are running partial schedules.  And then? The playoff reset, should Chastain make it, puts everyone on equal footing.  Should he make it to Homestead, he’ll be talked about all winter long.  If he wins it all? Instant legend.

How… come we don’t see more road courses in Cup?

Currently, there are three road courses on the schedule: Sonoma, Watkins Glen International and the ROVAL.  There was a time when many fans hated road racing and would have happily seen it removed permanently, but in recent years, the twists and turns have made for some of the best racing anywhere.  Road racing has increased drastically in popularity, but does that mean NASCAR should add more road courses to the schedule?

One more would make sense, putting road racing on par with superspeedway racing.  But more than that?  Not so fast.

Part of what makes these races compelling is that we don’t see them every week. Absence makes the heart grow fonder, after all. If there were several each year, they wouldn’t be different.  Good racing should keep fans watching, but things don’t necessarily play out that way.

While NASCAR needs to keep testing drivers’ skills with different types of tracks, one more road course should be the upper limit for the time being.