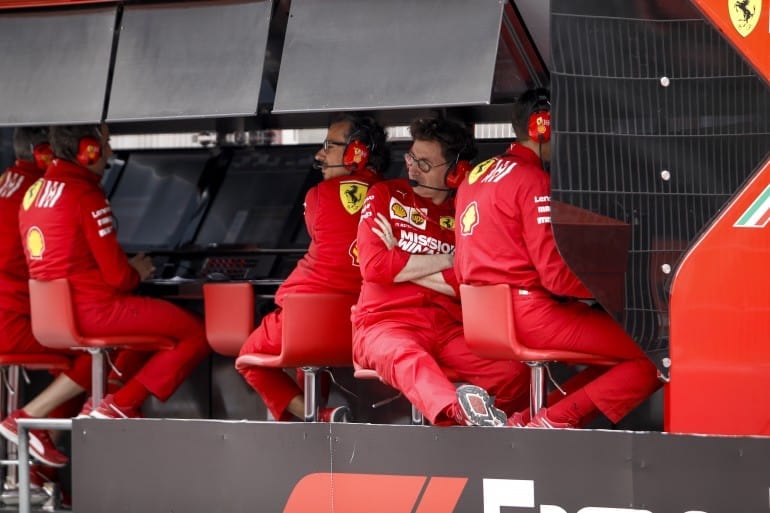 The stewards overseeing the Canadian Grand Prix made one of their more controversial calls this past Sunday. On lap 48, as Lewis Hamilton stalked Sebastian Vettel, Vettel lost the rear end of his Ferrari, waggled, ran into the grass, then rejoined the track and managed to keep Hamilton behind.

The incident, at first, did not seem like much of anything. The commentators seemed to think it benign, just a slip-up and nothing to think much about. That attitude didnʻt last.

It became clear that they recognized the incident might be worthy of investigation though they did not seem to think that the moment was anything than a racing incident. It turns out that the stewards, who had begun to investigate the matter, saw things differently and by lap 60 had ruled that Vettel rejoined the track in an ʻunsafeʻ manner and would receive a five-second penalty.

The officials concluded, after watching the live feed, video from a helmet-cam, and Vettelʻs communication with his team, that there was evidence enough to award the penalty.

Thatʻs what weʻve been told.

Officiating is a difficult matter in any sport, and as almost every sport becomes faster, the decisions become more challenging. At the same time, all the information that surrounds each sport, camera angles and whatnot, weʻre left to believe that the decisions are made with prudence.

When I went through high school, I played a number of sports with varying degrees of ability. Each one of those sports had referees or umpires who watched over us in an effort to adjudicate rules and level the notion of playing fairness. One sport, however, did not include any kind of official: tennis.

On the tennis court, we were left to our own rulings. We made all the line calls, challenged each other, and if things ever really got to the point where we could not get to a conclusionm weʻd basically play heads or tails with our rackets and then move on. Thatʻs how things worked.

Discussing high school tennis is not a convenient way to distract from the topic at hand but to illustrate that officiating is necessary in every sport, but that is not a new concept. Officials have been included in various forms of sport for ages. Even duels had officials to oversee the event, which seems peculiar seeing as how one party could end up dead.

In sport at this point, regardless of all the cameras and information available to decision-makers, the chance of a disappointing, frustrating, or controversial decision is still part of the game. Just because it seems that the tools exist for every call to be correct, there are still instances where the call is not so black-and-white, meaning the result will still be as good as spinning a tennis racket and seeing if the insignia on the bottom of the grip turns up W or M, or P or d.

That is what makes the Vettel-Hamilton ruling so difficult. Maybe Vettel did impede Hamilton after he was in the process of squaring away his Ferrari on the track. Or maybe he didnʻt. Maybe the stewards did not have to examine the matter and look into it with the thoroughness of researchers picking apart the Zapruder film frame-by-frame. And maybe they should not have ruled the matter in the way they did.

Sport is a strange creation. It requires officiating and yet officiating itself will never actually handle every issue. Officiating is as flawed as any human left to errors and disappointments. In some ways, F1 may not even care, as having controversy such as this one keeps their sport in the news in what has begun to look like a runaway season for both Hamilton and Mercedes.

Of course, controversy and F1 are nothing new. Consider the 1989 Japanese Grand Prix at Suzuka in what was the season finale and with the drivers title at stake. Alain Prost held the lead against teammate Ayrton Senna, a position that would prevent Senna from successfully defending his championship and give it to Prost.

As Senna used a late-breaking maneuver to move inside of Prost, Prost turned in on him and the two collided. Prost crashed out of the race. Senna required help but was able to limp his injured car back to the pits where his crew affixed a new front wing and he then sought out chasing down the new leader, Alessandro Nannini. Senna eventually passed Nannini taking the win and the championship – or so everyone thought.

Instead, the stewards ruled that Senna did not rejoin the track where he had gone off, as he had driven through a chicane rather than going backward(?). The rule, at the time, read that drivers were supposed to come back on where they had left (go figure). The drivers had argued that such a move was dangerous in the pre-race meetings but the rule was kept, for then.

The steward’s decision stripped Senna of the win, which gave Prost the title. Such an example shows that F1 officials have no fear in their decision-making moments and are willing to make unpopular calls regardless of the stakes. The Canadian GP was just a continued example of their ideology in practice.