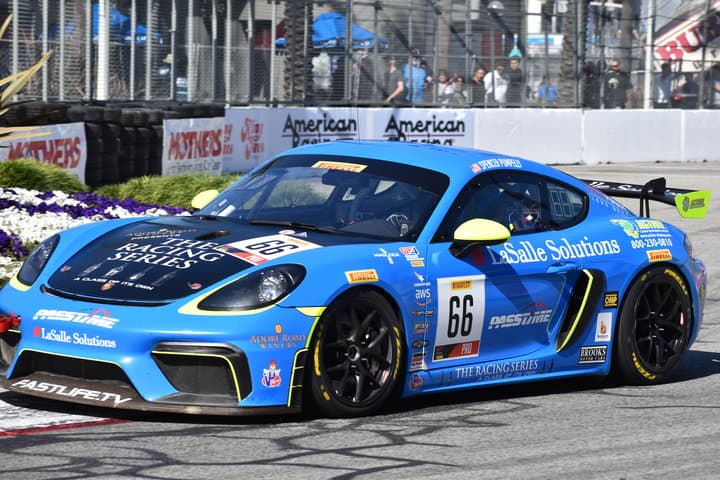 On Saturday morning (April 27), there were three separate qualifying sessions for the upcoming Pirelli GT4 America races this weekend at VIRginia Interinational Raceway.  Despite three on-track sessions, seemingly not much has changed from Long Beach.

In the Sprint session, it was The Racers Group’s Spencer Pumpelly that topped the field. Using a draft from an SIN R1 GT4 and the McLaren of Jarret Andretti, Pumpelly turned in a lap at 103.837 mph to claim the pole for Pirelli GT4 America Sprint Race No. 1.  The lap is a new track record for GT4 equipment at VIR.

In the Am class, no one could touch Murillo Racing’s Matthew Fassnacht. Fassnacht turned in a lap at 103.242 mph, good enough for second overall and the Am pole. Fassnacht’s time was more than nine-tenths of a second faster than the Ford Mustang GT4 of Ian Lacy Racing’s Drew Staveley in second. Park Place Motorsports’ Alan Brynjolfsson was third, followed by Andretti and Michael Dinan.

Race No. 1 for the Pirelli GT4 America Sprint class is scheduled to go green at 1:05 p.m. Saturday afternoon.

The first SprintX qualifying session (for Race No. 1 starting drivers) was scheduled to run for 15 minutes.  It was cut short to 10.5 minutes due to a big crash for Kelly-Moss/Photon Motorsports’ Eric Palmer spinning into the tires exiting Turn 10 and getting on his side. Palmer was ok, but the team’s further participation in the weekend is in question.

With nearly a third of the session cut out, many teams were not able to put down their best times. Fastest overall was Kris Wilson in the Am-class BMW M4 GT4 for AutoTechnic Racing. Wilson turned in a lap at 102.868 mph to claim both the SprintX Am and overall pole.  Wilson’s time was one-sixth of a second faster in class than Rearden Racing’s Vesko Kozarov. Andretti was third quickest in his No. 36 McLaren.

In GT4 East Am, Fassnacht was once again fastest with a lap at 102.751 mph, good for second overall. Fassnacht was nearly seven-eighths of a second faster than Randy Mueller in the Epic BMW M4 GT4, while BGB Motorsports’ Thomas Collingwood was third.

SprintX Pro-Am, the de facto top class in SprintX racing, was relegated to third fiddle. NOLAsport’s Matt Travis was fastest with a lap at 102.602 mph in his Porsche, good enough for fourth overall. Travis’ lap was one-sixth of a second faster than Dinan in his Porsche.  Sean Quinlan in the Stephen Cameron Racing BMW was third.

In the second session, the bigger guns came out to play.  In Texas back in March, the two fastest teams appeared to be Park Place Motorsports and NOLAsport.  That was once again the case here.

Trent Hindman in the Park Place Motorsports Porsche won the overall and GT4 East Pro-Am poles with a lap at 103.516 mph.  The lap was more than a half-second faster than Classic BMW’s Stevan McAleer. Andrew Davis was third in another Porsche, while KohR Motorsports’ Nate Stacy was fourth. Karl Wittmer is the Precision Driving Tech BMW was fifth.

NOLAsport’s Jason Hart was less than three-hundredths of a second off of the overall pole. Hindman beat him out, but Hart was able to claim the SprintX Pro-Am pole with a lap at 103.490 mph. Hart’s lap was more than half a second faster than Flying Lizard Motorsports’ Robby Foley. Stephen Cameron Racing’s Greg Liefooghe was third.

GT4 East Am was dominated by Murillo Racing. Christian Szymczak won the class pole with a lap at 103.484 mph, less than four-hundredths of a second off the overall pole and good for third overall. Szymczak’s lap was nearly 2.5 seconds faster than The Racers Group’s Derek DeBoer.  BGB Motorsports’ John Tecce was third.

Finally, the SprintX Am class was led by NOLAsport’s John Capestro-Dubets with a lap at 102.493 mph, good for ninth overall.  Capestro-Dubets was a quarter of a second faster than GMG Racing’s James Sofronas, followed by Rearden Racing’s Jeff Burton.

Race No. 2 for the Pirelli GT4 America SprintX/GT4 East is scheduled for 4:10 p.m. on Sunday afternoon.  All races will be streamed live on GT4-America.com.