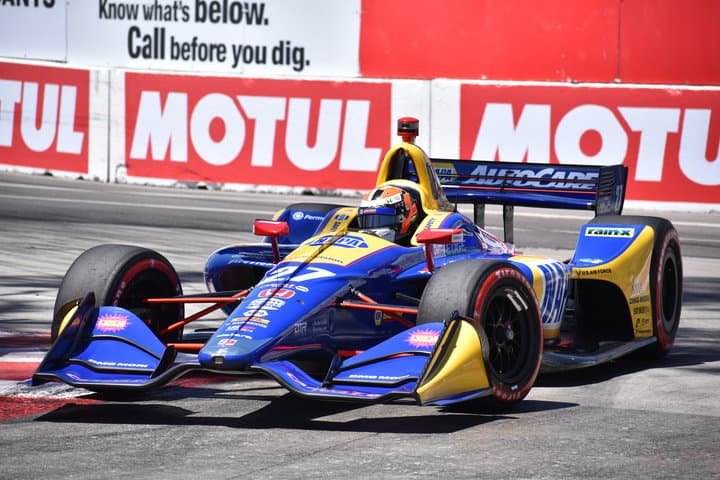 Andretti Autosport’s Alexander Rossi was able to put down a lap of 106.569 mph in the closing seconds of the Firestone Fast 6 Saturday afternoon (April 13) to win the pole for Sunday’s Acura Grand Prix of Long Beach.  It is Rossi’s second consecutive pole at Long Beach and he comes into Sunday’s 85-lap race as the defending champion.  That said, none of this is easy to Rossi.

“It’s hard out there,” Rossi said during the post-qualifying press conference.  “It’s amazing how tight out there it continues to be.  It is exponentially harder than last year.”

During most of the day in qualifying, Scott Dixon was the man to beat.  Dixon set a lap at 106.143 mph to take the provisional pole with a couple of tenths of a second in hand.  His next lap was even quicker, but Dixon messed up Turn 9 at the end of Seaside Way.  According to NBCSN’s broadcast of qualifying, Dixon came on the radio, used an expletive, and backed off to set up another flying lap.  He could not improve.

Dixon’s error left the door open just that little bit.  Rossi was able to take advantage to earn the pole.

Rossi’s lap was more than a quarter of a second faster than Dixon, who will start second.  Team Penske teammates Will Power and Josef Newgarden will share the second row on Sunday, while Simon Pagenaud will start fifth.  Graham Rahal rounds out the Firestone Fast 6 participants.

Ryan Hunter-Reay, who was fastest in opening practice on Friday, just missed out on the Fast 6 and will start seventh.  Barber Park winner Takuma Sato will start eighth, while rookies Patricio O’Ward and Colton Herta will start ninth and 10th.

The qualifying sessions were not completely clean.  AJ Foyt Enterprises’ Tony Kanaan actually turned in the sixth fastest time in the first group.  However, he slid into the tires with a minute remaining, which brought out the red flag.  As per INDYCAR rules, Kanaan lost his two fastest laps, dropping him to the rear of his group.  Kanaan will start 21st on Sunday.

In the second round, Chip Ganassi Racing’s Felix Rosenqvist was trying his hardest to get into the Firestone Fast 6 on debut in Long Beach.  Unfortunately, he ran into trouble at the end of Seaside Way.

He was second in Round 2 of qualifying but locks it up again, this time crashing into the tire barrier. @GPLongBeach @INDYCAR pic.twitter.com/BDxse6YXTx

Being second overall was good, but you have to keep it clean if you want to keep that.  Rosenqvist couldn’t do and lost that time.  He’ll start 12th on Sunday.  He doesn’t appear to be all that worried, though.

Locked up and hit the wall in qualifying and got lap deleted for causing red flag. Completely my own mistake… Very close today, and pushed too hard. Feel sorry for my crew as we had Fast 6 in a bag. Starting 12th tomorrow! @CGRTeams #NTTDATA

Coverage of the Acura Grand Prix of Long Beach is set to begin at 4 p.m. EDT Sunday afternoon on NBCSN.  The green flag is currently scheduled to fly at 4:42.