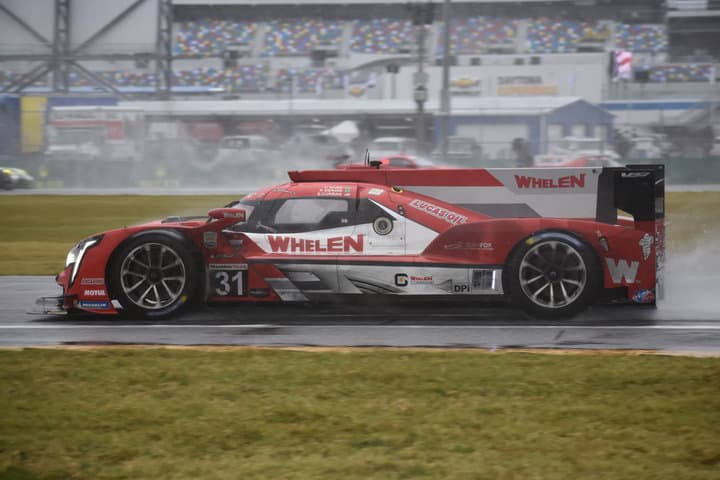 Action Express Racing’s No. 31 Cadillac shared by Eric Curran, Pipo Derani and Felipe Nasr proved to be the dominant team at Sebring on Saturday (March 16).  The trio combined to lead 249 of the 348 laps to win the Mobil 1 12 Hours of Sebring presented by Advance Auto Parts.

“It’s unbelievable.  I’m out of words right now,” Derani said after the race.  “Man. This is amazing and it’s my third win in win years so I couldn’t be any happier.”

“I don’t know where to begin, to be honest,” Nasr stated.  “It was pretty challenging. I was just talking to Pipo [Derani] and it’s an unbelievable job we did out there.  The Action Express boys gave us an amazing car all day.  It was an
almost perfect day in racing which is almost impossible.  It was a perfect execution all day long.   In the wet, [Derani] drove fantastic out there.  Super tricky.  The team making the calls was perfect.  I’m super happy to get my first win at Sebring.  And the [Michelin Endurance Cup] is a big bonus for us.  It still hasn’t synced in.  These guys up here did an amazing job.”

Due to heavy rains, the first 40 minutes of the race were run under yellow.  Once the green came out, pole sitter Dane Cameron proceeded to drop like a stone as his Acura ARX-05 not only was just not suited for the conditions, but also had electrical issues.  Mazda Team Joest’s Tristan Nunez snatched the lead immediately in his No. 77 Mazda, but it was the Action Express Racing Cadillacs were the fastest in the wet.  First, Filipe Albuquerque took the No. 5 Cadillac to the front, then Derani took his turn.

The Mazdas were strong early, especially when the track was wet.  Unfortunately, bad luck struck.  The No. 77 dropped out of the race in the third hour due to a fire in the car caused by an electrical issue.  Later on, Jonathan Bomarito put a wheel off into the wet grass and slid the No. 55 into the tires to bring out a caution.  The No. 55 was able to continue, but never made the two laps they lost back up.  They would finish sixth.

Pit strategy jumbled the order around at times, but the No. 31 Cadillac was in control for much of the race.  The race to the finish looked early for the team, but Turner Motorsport’s Bill Auberlen had a left front suspension failure that brought out the yellow with 15 minutes remaining.  That closed the entire pack up to the back of Nasr.  The green came back out for a four-lap sprint to the finish, but no one could keep the Whelen Engineering-sponsored Cadillac out of Victory Lane.

Wayne Taylor Racing’s Cadillac finished second, just over one second behind at the finish after battling early overheating issues.  The No. 5 Action Express Cadillac rounded out the podium.  Acura Team Penske’s No. 7 for Helio Castroneves, Alexander Rossi and Ricky Taylor finished fourth after spending much of the race off of the lead lap.  CORE autosport’s Nissan DPi for Jon Bennett, Colin Braun and Romain Dumas finished a lap down in fifth.

In LMP2, the two cars in the class qualified a mere 11-thousandths of a second apart.  The race for the class was effectively over in the third hour.  Anders Fjordbach, a last-minute addition to the PR1 Mathiasen Motorsports squad for the weekend, suffered a left rear suspension failure.  48 minutes in the garage put the team 22 laps down.  That was more than enough of an advantage for Performance Tech Motorsports’ Cameron Cassels, Andrew Evans and Kyle Masson.  Despite some issues later in the race, the Florida-based team held on for the victory by 13 laps.

For much of the weekend, the GT Le Mans class was dominated by Porsche.  However, the Porsche 911 RSR did not work well in the rain.  Laurens Vanthoor found his No. 912 Porsche to be nearly undrivable early, while Patrick Pilet struggled in the No. 911 as well.  Such a situation is a reversal from previous years when the Porsche 911 RSR was the car to have in the wet.

The Porsche struggles brought the two Fords to the front of the pack.  The No. 67 Ford shared by Ryan Briscoe, Scott Dixon and Richard Westbrook spent the vast majority of the race at the front, but the Porsches came back into play in the dark thanks to strategy.  Nick Tandy was able to snag the lead when Antonio Garcia pitted the No. 3 Corvette.

The late yellow for Auberlen’s suspension collapse brought the leaders back together.  Briscoe was right up on Tandy and ready to pounce.  However, the GT Le Mans leaders were mixed in with a number of GT Daytona teams.  Briscoe had contact with the Magnus Racing Lamborghini of Spencer Pumpelly and spun with just a couple of laps to go.  That was more than enough for Tandy, Pilet and Frédéric Makowiecki to hold on for the class victory.

The No. 66 Ford inherited second when Briscoe spun, 1.951 seconds back.  The No. 3 Corvette of Garcia, Jan Magnussen and Mike Rockenfeller was third, followed by BMW Team RLL’s No. 24 BMW M8 GTE for John Edwards, Philipp Eng and Jesse Krohn.  The No. 912 Porsche of Vanthoor, Earl Bamber and Mathieu Jaminet were fifth and on the lead lap at the finish despite their early issues.

GT Daytona was dominated for much of the race by PFAFF Motorsports.  After crashing out of the Rolex 24 at Daytona on a restart, Zacharie Robichon came into his own Saturday.  The Canadian rookie led a large chunk of the race early on.  The No. 9 Porsche was on top into the ninth hour before dropping back.  A near 10-minute pit stop with two hours to go ended any chance of a decent finish.

Ultimately, the race ended up being a Lamborghini show with the GRT Grasser Racing Team back in the middle of things.  Much like in Daytona, the trio of Mirko Bortolotti, Rik Bruekers and Rolf Ineichen were strong when it counted.  Bortolotti took the class lead with 51 minutes to go and held on to give the European squad their second consecutive victory.

IMSA teams are off for the next six weeks.  The season will resume May 4 at the Mid-Ohio Sports Car Course.  All four classes will compete, but the race is of added importance for the GT Daytona class as it will be the first race of the WeatherTech Sprint Cup, a championship within a championship that focuses on the sprint events.