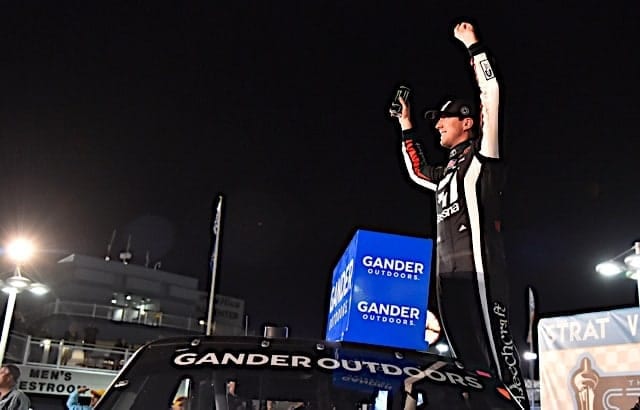 Las Vegas Motor Speedway showed us NASCAR still has kinks to work out with its new handling package. Cars struggled to pass each other on long runs, the field spread out considerably and slower speeds resulted in a caution free race aside from stage breaks. The racing up front was strong at times, pit strategy proved unpredictable but there’s still work to be done here to improve the product.

However, there’s one team in particular who doesn’t want a thing to change. Team Penske has its race setups figured out and the rest of the field is simply chasing.

Similar to Kevin Harvick and Stewart-Haas Racing last year, this group has come out of the box swinging. Brad Keselowski and Joey Logano were 1-2 at Atlanta Motor Speedway until Logano suffered through tire problems late in the race. This week, all the Goodyears held up and this duo was able to settle things among themselves. A back-and-forth battle ensued, this time with the reigning MENCS champion eking it out by a little over two-tenths of a second. Had Ryan Blaney not had a broken valve stem, who knows? We could have seen a 1-2-3 finish.

Told my friends at @Pennzoil last night we were going to do a burnout on their logo and guess what…we made it happen!!!! #Pennzoil400 pic.twitter.com/UbBpzxUwA4

If you’re scoring at home, that now means three victories by Penske in the last four Cup races. That includes a championship and two postseason spots already secured in 2019. Keselowski became the winningest driver in team history and Logano may not even be in his prime yet at age 28. Sure, their qualifying has been rough the last two weeks but what does it matter? That doesn’t pay the championship points or the big trophy when you reach the checkered flag first.

In the end, it was Penske up front battling among themselves. The field may have been closer but close doesn’t really cut it outside of Penske.

“Brad and I were so evenly matched,” Logano said. “Team Penske one, two, shows the speed we’ve got.”

“I think our engineering team back in Mooresville has really done a good job from an aero standpoint,” added owner Roger Penske. “And obviously, the Roush Yates engines today were there.”

It produced a little extra speed that showed parity is still an illusion in the Cup Series. Last year’s MENCS championship team is picking right back up where they left off; right on top. – Tom Bowles

Whenever Kyle Busch enters an Xfinity Series race, he’s the favorite to go to Victory Lane. That was the case on Saturday at his home track.

With qualifying being postponed due to weather, Busch took the green flag in the eighth position. He shot to the top five before having to pit for a loose wheel. The No. 18 was trapped a lap down, but by the halfway point had cracked the top five.

Over the final half of the race, Busch dominated. At times, only Joe Gibbs Racing teammate Christopher Bell and Tyler Reddick were within 20 seconds of the lead. But a late caution from Brandon Jones led to an overtime finish.

While entering Turn 3 in overtime, Busch pinched Reddick down on the white line, causing the No. 2 to get loose. When correcting, Reddick got into Bell, while also tagging Austin Cindric and Zane Smith in the process.

Kyle Busch left Atlanta Motor Speedway as the winningest driver in the Truck Series when he scored his 52nd career victory, and he expanded that margin with a dominant win at Las Vegas Motor Speedway Friday night.

“It’s awesome, it’s what we set out to do every single time we get behind the wheel of something,” Busch said. “Overall, great night and hopefully the hometown crowd, all the folks from Las Vegas here enjoyed the show and maybe it was a little bit reminiscent of the Legend car days over there at the Bullring, but it’s all good for us here in victory lane.”

Despite drawing the ire of fans, Busch’s presence in the series is something that should be applauded. You don’t often get to have an owner in the team’s equipment to ensure it’s performing up to the proper standards. Beyond that, the drivers in the series who are working on furthering their career and moving up the NASCAR ladder have commented about how important it is to have a driver of Busch’s talent on the track with them.

With two races under his belt already this season, fans who would prefer he doesn’t run in the series only have three more events to go. Busch will run at Martinsville Speedway and Texas Motor Speedway in late March before heading to Charlotte Motor Speedway in May for his final start of the 2019 season. The question that remains in whether he’ll be able to win all five events he’s entered this year. – Beth Lunkenheimer

Last weekend, TC America (formerly Pirelli World Challenge’s TC classes) held their season openers at Circuit of the Americas.  Unlike the other divisions that comprise what is now SRO America, there were limited changes on tap.

The TC races were likely the most competitive.  Race No. 1 on Saturday saw Johan Schwartz win in his BMW from pole in damp conditions.  Race No. 2 was quirky.  A crash on the first lap involved both Schwartz and the Nissan of Paul Terry, putting both drivers to the rear.  In addition, BimmerWorld Racing’s Cameron Evans and Chandler Hull both started on rain tires and moved up to the lead.

As the track dried, the BimmerWorld teammates came back to the pack.  Schwartz was able to get all the way back to the lead, but he was overtaken on the final lap by Jeff Ricca in the sole Hyundai Genesis Coupe in the race.  Ricca then held on to win Race No. 2 over Toby Grahovec and Schwartz. – Phil Allaway