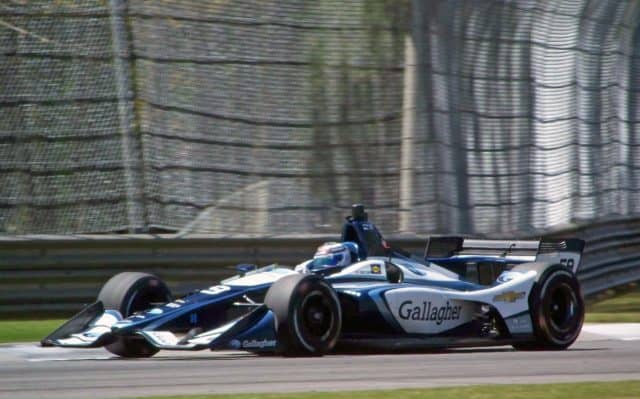 NTT IndyCar Series team Carlin announced on Monday (Jan. 21) that Max Chilton will return to the team in 2019 after a successful freshman season with the organization.

Chilton will pilot the No. 59 Chevrolet with returning sponsor Gallagher on board; the sponsor has partnered with Chilton in all 50 of his NTT IndyCar Series starts. In those 50 starts, his best career finish came in the 2017 Indianapolis 500, where he finished fourth.

“We are pleased to renew our relationship with Carlin for the 2019 NTT IndyCar Series season,” Christopher E. Mead, Gallagher chief marketing officer, said in a team release. “After a successful first season with Carlin and Max Chilton, we will continue to leverage this partnership to further increase awareness of our company to a global audience and deepen our relationships with clients and prospects.”

It will be Chilton’s fourth season in the NTT IndyCar Series and second with Carlin. He moved from Chip Ganassi Racing following the 2017 season.

During the 2018 season, Chilton tallied a best finish of 11th during the second race at the Detroit Grand Prix and was able to lead 10 laps in the semifinal race at the Grand Prix of Portland.

“I couldn’t be happier to formally announce that Gallagher will be back for the 2019 season partnering with myself and Carlin,” Chilton added. Gallagher and Carlin are like family to me and I’m excited to see what we can do together building on both partnerships.

“Our first year together as an INDYCAR team had its ups and downs, but the potential and growth that we showed as a team was obvious to everyone. I want to say a massive thank you to Gallagher for their continuing support of me. To have the opportunity to represent the nearly 30,000 employees of Gallagher, a brand that focuses so heavily on teamwork and innovation, is a true privilege.”

RACER reported that Chilton’s teammate from 2018, Charlie Kimball, will return to the organization on a part-time basis, with no word on how many races. Kimball has competed in six straight seasons on a full-time basis, tallying one victory and five podium finishes. His last podium finish came at Sonoma Raceway in 2015.