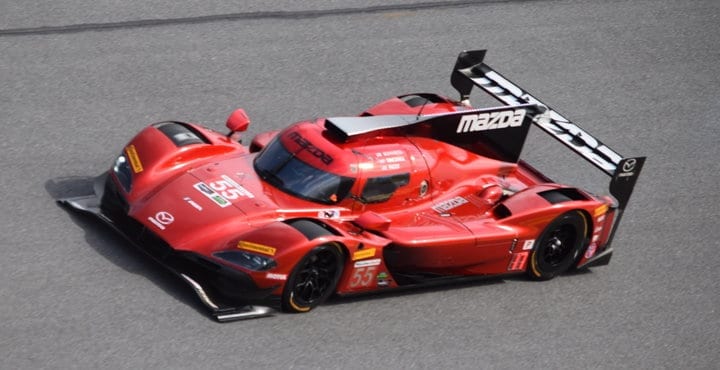 Mazda Team Joest continued Saturday (Jan. 5) to show that they have a lot of speed in their Mazda RT24-P.  Jonathan Bomarito turned in the fastest lap of the day during the night session with a lap at 135.571 mph.  The lap is less than seven-tenths of a second off of the all-time track record, set by PJ Jones in 1993 in a Toyota Eagle Mk. III.

In the morning session, it was Harry Tincknell who put his No. 55 Mazda at the top of the chart with a lap at 135.012 mph.  This lap was one-eighth of a second faster than Wayne Taylor Racing’s Fernando Alonso in the best of the Cadillacs.  Clearly, the two-time World Champion got himself up to speed quickly.

Oliver Jarvis was third quickest in the second Mazda, followed by Pipo Derani in Action Express Racing’s No. 31 Cadillac.  João Barbosa was fifth in the Mustang Sampling-sponsored No. 5 Cadillac.

For the returning Cadillac teams, the opening session was pretty good.  For Juncos Racing, not so much.  The morning session was red-flagged when Starworks Motorsport’s Ezequiel Perez Companc was forced to slow to avoid the spinning Team WRT/Speedstar Audi.  Perez Companc was then clouted from behind by William Owen‘s Cadillac.  Both the Juncos Cadillac and Starworks Audi required significant repairs, but would return to the track later in the afternoon.

In GT Le Mans, Porsche GT Team’s Mathieu Jaminet proved that he is a quick study.  In only his second-ever day of running at Daytona International Speedway, Jaminet was fastest in class with a lap at 123.395 mph.  This lap was a mere seven-thousandths of a second faster than Corvette Racing’s Antonio Garcia.  Frédéric Makowiecki was third quickest in the No. 911 Porsche, followed by Risi Competizione’s Davide Rigon.  Ford Chip Ganassi Racing IMSA’s Richard Westbrook was fifth, only three-tenths of a second off of Jaminet.

GT Daytona saw Porsche Junioren racer Matteo Cairoli fastest in the Black Swan Racing Porsche.  Cairoli lapped the 3.56-mile road course at an average speed of 120.998 mph, good enough for 23rd overall.  The lap was less than three-hundredths of a second faster than AJ Allmendinger in Meyer Shank Racing with Curb-Agajanian’s No. 86 Acura.  Spirit of Race’s Daniel Serra was third fastest in his Ferrari, followed by the similar car of Scuderia Corsa’s Cooper MacNeil.  Via Italia Racing’s Victor Franzoni made it three Ferraris in the top five by turning the fifth best time.

IMSA WEATHERTECH SPORTSCAR CHAMPIONSHIP ROAR BEFORE THE 24 SESSION NO. 3 RESULTS

The afternoon session saw Wayne Taylor Racing’s Renger van der Zande turn in the fastest lap at 135.570 mph in his Cadillac.  That lap was nearly a half-second faster than Acura Team Penske’s Ricky Taylor.  Mike Conway in the No. 5 Cadillac for Action Express Racing was third, followed by Olivier Pla in the No. 55 Mazda.  Dane Cameron in the No. 6 Acura was fifth.

LMP2 saw DragonSpeed’s Nicolas Lapierre turn in the fastest lap in the class to this point.  Lapierre’s lap at 132.735 mph was good enough for ninth overall, just over two seconds off of van der Zande’s lap.  Lapierre was over a half-second quicker than Gabriel Aubry in PR1 Mathiasen Motorsports’ No. 52 ORECA 07-Gibson.

Westbrook took his No. 67 Ford GT to the top of the GT Le Mans charts with a lap at 124,249 mph, good enough for 15th overall.  Westbrook’s lap was seven-hundredths of a second faster than Porsche GT Team’s Patrick Pilet.  Sébastien Bourdais was third fastest in the No. 66 Ford, followed by Earl Bamber in the second Porsche.  Rigon was fifth quickest.

Trent Hindman was fastest in GT Daytona in his No. 86 Acura.  Hindman’s lap at 121.441 mph (24th overall) was nearly eight-tenths of a second faster than teammate Katherine Legge.  Bortolotti was third in his Lamborghini, followed by Alex Riberas in the Moorespeed Audi.  P1 Motorsports’ Maximilian Buhk was fifth in his Mercedes.

Dries Vanthoor, who just became an uncle on Friday, was sixth fastest in the Montaplast by Land-Motorsport Audi, followed by Marco Mapelli in the Magnus Racing Lamborghini.  AIM Vasser Sullivan’s Aaron Telitz and Austin Cindric were eighth and ninth, while Spirit of Race’s Mathias Lauda was 10th.

IMSA WEATHERTECH SPORTSCAR CHAMPIONSHIP ROAR BEFORE THE 24 SESSION NO. 4 RESULTS

Aubry put the PR1 Mathiasen Motorsports ORECA 07 on top in LMP2 with a lap at 132.137 mph, good enough for 12th overall.  The lap was nearly six-tenths of a second faster than DragonSpeed’s Ben Hanley.

GT Le Mans saw Nick Tandy turn in the fastest time in his Porsche 911 RSR.  Tandy’s lap of 123.943 mph was one-eighth of a second faster than Bamber.  Bourdais was third, followed by Scott Dixon in the No. 67 Ford and Colton Herta in the BMW Team RLL No. 25.

GT Daytona saw Franzoni put the Via Italia Racing No. 13 Ferrari on top with a lap at 121.086 mph.  Franzoni’s lap was one-ninth of a second faster than Serra, while Buhk was third in his Mercedes.  Legge was fourth fastest, then Phil Keen in the EBIMOTORS Lamborghini.

For the GT Daytona teams, the night session was the last session of the Roar Before the 24.  Hindman’s chart topping time in Session No. 4 held up as the fastest GT Daytona of the two full days of testing.

IMSA WEATHERTECH SPORTSCAR CHAMPIONSHIP ROAR BEFORE THE 24 SESSION NO. 5 RESULTS