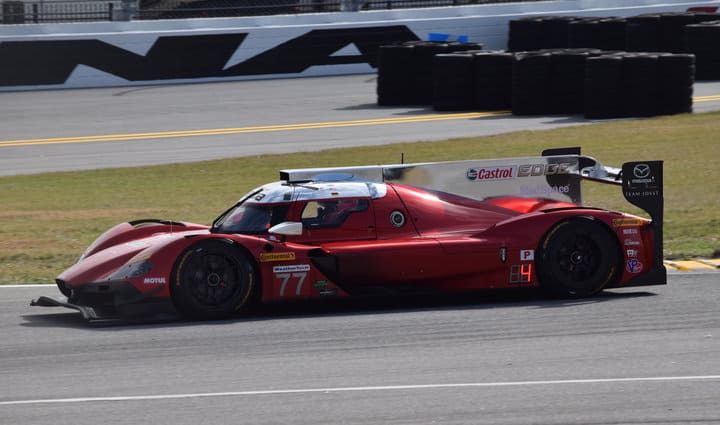 At the beginning of 2018’s Rolex 24 at Daytona weekend, Mazda Team Joest was fastest with their RT24-P in practice.  The Roar Before the 24 on Friday (Jan. 4) started out the same way.  Oliver Jarvis was fastest overall Friday with a lap at 133.515 mph.

Jarvis set the quick time of the day just six minutes into the 75-minute session and made that hold up for the entire day.  The lap was four-tenths of a second faster than Wayne Taylor Racing’s Jordan Taylor in his Cadillac.  Harry Tincknell was third in his Mazda, followed by Action Express Racing’s Felipe Nasr.  Filipe Albuquerque in the No. 5 Cadillac was fifth quickest.

The LMP2 class only had two cars take time.  Of those two, the PR1 Mathiasen Motorsports ORECA 07-Gibson of Gabriel Aubry was fastest with a lap at 128.381 mph, good enough for 11th overall.  Things weren’t all rosy for the small team as Aubry stalled on course, bringing out a red flag that ultimately ended the session early.

In GT Le Mans, Porsche took the first two spots on the charts.  Porsche GT Team’s Patrick Pilet was fastest in class (13th overall) with a lap at 122.213 mph.  This lap was one-sixth of a second faster than teammate Earl Bamber.  Ford Chip Ganassi Racing IMSA’s Dirk Müller was third fastest in the No. 66 Ford GT, followed by his teammate Ryan Briscoe.  Risi Competizione’s Davide Rigon was fifth fastest in his Ferrari.  The entire class was separated by less than 1.4 seconds.

Riley Motorsports may not be able to race with the wheels they showed off on Thursday, but their Mercedes-AMG GT3 is still plenty fast.  Jeroen Bleekemolen was fastest in his Wynn’s-sponsored Mercedes with a lap at 119.566 mph.  Bleekemolen’s lap was one-tenth of a second faster than Pedro Lamy in the Spirit of Race Ferrari.

40 of the 47 teams entered set times during the session.  Notables who did not were both DragonSpeed ORECA 07-Gibsons and CORE autosport’s Nissan DPi.

IMSA WEATHERTECH SPORTSCAR CHAMPIONSHIP ROAR BEFORE THE 24 SESSION NO. 1 RESULTS

In the warmer afternoon session, Wayne Taylor Racing’s Kamui Kobayashi showed that he doesn’t need the might of Toyota to be fast.  The Toyota GAZOO Racing regular was fastest overall in the session with a lap at 132.676 mph.

Aubry was once again fastest in LMP2 with a lap at 128.707 mph, good for 11th once again.  That lap was two-tenths of a second faster than DragonSpeed’s No. 81 for Ben Hanley.  The No. 81 was late to arrive at the track.  The second car is even later and may not show up at all this weekend.

GT Le Mans saw Rigon top the charts with his Ferrari.  Rigon’s lap of 122.386 mph was the fastest GT Le Mans lap of the day.  It was one-seventh of a second faster than Ford Chip Ganassi Racing IMSA’s Briscoe.  Corvette Racing’s Antonio Garcia was third quickest, followed by Porsche GT Team’s Nick Tandy and Bamber.  The top five in class were separated by just over four-tenths of a second and the entire class by just over nine-tenths.

GT Daytona saw Bleekemolen increase his pace in the afternoon.  His lap of 120.392 mph was nearly three-quarters of a second faster than his quick time in morning.

Bleekemolen’s lap was one-third of a second faster than Spirit of Race’s Daniel Serra, who won the GT Daytona class pole last year at Daytona.  Turner Motorsport’s Jens Klingmann was third fastest, followed by Katherine Legge in the No. 57 Caterpillar-sponsored Acura for Meyer Shank Racing with Curb-Agajanian.  Hawksworth was once again fifth fastest.

The 90-minute afternoon session started in dry conditions, but the rains came in the final 20 minutes.  Many teams chose to pack it in for the day at that point, but others stuck it out to get some practice in the wet.  The result was a series of somewhat harmless spins.

IMSA WEATHERTECH SPORTSCAR CHAMPIONSHIP ROAR BEFORE THE 24 SESSION NO. 2 RESULTS

IMSA WeatherTech SportsCar Championship teams have three on-track sessions scheduled for Saturday.  For GT Daytona teams, this will be the final day of the test as they will be done after night practice.  Session No. 3 is scheduled to go green at 10 a.m. Saturday morning.