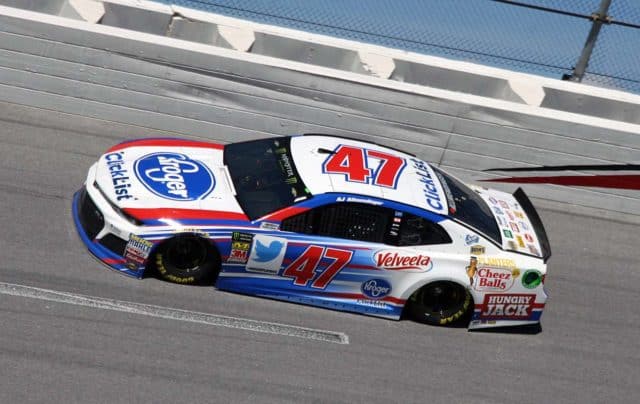 If there is a lesson to be learned from the 2018 season and the underdog teams, it’s that the right combination of team and driver is everything. Perhaps the biggest example is one of a small-team driver moving into fully-funded equipment and flourishing, as Aric Almirola has when he moved from Richard Petty Motorsports, where he had a small measure of success, to Stewart-Haas Racing, where he finished fifth in driver points for the season.  That’s a huge leap, but it illustrates the one thing fans need to know before making snap judgments on these teams: lack of money in no way equals lack of talent.

Money buys speed.  There is really no way around that.  But the right people in the right situations make a difference.  While JTG Daugherty Racing was the best of the small teams in 2018, they chose to make a change in the No. 47, which will be piloted by Ryan Preece next year. But take a look at the second team, one the organization took a gamble on.  Chris Buescher has done well, and the organization overall has benefitted from his and the No. 37 team’s improvement. Matt DiBenedetto has exceeded expectations with Go FAS Racing with finishes better than they deserved on paper.  IT landed DiBenedetto a step up in the ranks for 2019.

On the other side of the coin, you have teams who have struggled when they added new drivers.  Richard Petty Motorsports gained a spot in the drivers’ standings with Bubba Wallace but had more top 5 and top 10 finishes than a year ago with Almirola.  Perhaps that’s an unfair comparison as Wallace was a Cup rookie this season and had some solid runs given the equipment.  The rookie excuse doesn’t work for Germain Racing, though.  Ty Dillon had a solid rookie year but has backslid this year as communication hasn’t really improved between driver and team. He’s had just one top 10 in two seasons, fewer than Wallace has had this year despite the one spot Dillon had over Wallace in the standings.

In other words, you need money to succeed, but the right driver also makes a difference.  That’s never more evident than when a driver like Almirola shows what he can do when the money materializes, but it’s also evident when a driver elevates a team without money, or brings one down despite bringing plenty of grandpa’s cash with him.

In what was likely his last race as a full-time Cup driver, AJ Allmendinger takes home the final Underdog of the Race honors for 2018, finishing 19th in a Homestead race that featured not much unexpected.  Allmendinger was undeniably one of the best drivers on track at a road course, but he never showed the same prowess on most of the ovals other than, oddly enough, Martinsville. He’ll likely draw offers for road course races in Cup and XFINITY in the coming years, but a full-time ride of the caliber of the No. 47 is unlikely, so Homestead was by all accounts his swan song.

The only other underdog in the top 20 Sunday was David Ragan, who finished 20th.  That’s a solid day with a five-spot gain over where he started.  Front Row Motorsports has as a whole shown some improvement this season, with Ragan at the helm of that.

Rounding out the top three in small team competition on Sunday was Bubba Wallace in 21st.  He deserves a shoutout for his tenth-place run in Phoenix last week, though this week’s follow-up was decidedly mediocre.  It was a better mediocre than a lot of others, if nothing else.

That sums up just about everybody this week. Homestead is a tough track for any team lacking even a little.  Ty Dillon (22nd) and Chris Buescher (23rd) we the only other small-team drivers in the top 25, but their days had little to write home about.

In the 26th-30th “not the worst day we could have had but that’s about it” category were Matt DiBenedetto (26th, and in reality a decent run for the No. 32 team), and Michael McDowell (28th) McDowell is a driver I thought would be in the above category of drivers who elevated their teams but hasn’t done as much as I thought.  Front Row has improved of late, but isn’t quite meeting potential weekly yet.

On the 31st or worse list to close out the season are the usual suspects. Landon Cassill (31st) has shown a bit of improvement for StarCom Racing.  JJ Yeley (32nd), Ross Chastain (33rd), Corey LaJoie (34th) and BJ McLeod (35th) rounded out that bracket.  Kyle Weatherman (36th), Timmy Hill (37th), Tanner Berryhill (38th) and Regan Smith brought up the rear.  Smith had mechanical issues from the parade laps on, so his finish might not be indicative of his team’s ability.  It will be interesting to see what that team does with a solid alliance next year. It won’t be at the level Furniture Row Racing enjoyed, and Leavine Family Racing isn’t starting from the same standpoint FRR had financially, but it is a step up and something to look forward to.

Let’s talk about a couple of drivers who overachieved in the XFINITY Series this year. After losing his ride early on, Kaz Grala took on the Fury Race Cars ride, an upstart, part-time operation, and made an immediate impact. One of two smaller operations to score top-20 runs at Homestead (18th), Grala and company exceeded expectations almost every time out, scoring a top five and four top 10s in just 12 starts.

Then there’s JD Motorsports’ Ross Chastain, whose continued overachieving in his JD Motorsports ride (16th at Homestead, the top underdog) caught Chip Ganassi’s eye.  In a three-race deal with Ganassi’s NXS operation, Chastain had a win and a second place.  His other finish of 25th happened when he crashed while racing for a top five if not the win.  Because of his performance with JDM, Chastail will be Ganassi’s full-time NXS driver in 2019, with a chance to contend for the series title.  That’s how it’s supposed to work.

Is there a better underdog story in 2018 than Hattori Racing Enterprises in the Truck Series?  HRE is a single-truck operation with a dozen employees and piecemeal sponsorship.  They weren’t sure they could run the entire 2018 schedule when the year began, let alone win a race.  But they won.  And won again.  And again, five times in total with driver Brett Moffitt. At Homestead, with a spec engine because it was the best they could afford, against two of the wealthiest organizations in the series.  Moffitt won that one, too.  HRE, not one of its wealthier competitors, boasts the CTWS champion’s trophy in their shop. Improbable for sure, but a storybook ending for that small group of workers.

Just wanted to say thank you to @AJDinger before we get going today. You’ve been an awesome teammate that I’ve been able to learn from and enjoy being around these 2 years at @JTGRacing. It won’t be the same without you, but wish you the best going forward man?? ?

By far one of the best teammates I could have asked for. Will miss all the laughs and fun times. Hoping next year and the future holds wins and championships for you. https://t.co/kABdE1YFNX

It's the little things in life…

A special message from @tydillon for our loyal and incredible fans!

It’s hard to believe that tomorrow will be my last race with @GoFasRacing32. Feels like just yesterday we ran our first race together. I wanted to share these final thoughts and thank everyone before taking the green flag tomorrow for the last time in the No.32 Ford. pic.twitter.com/lDFsMoY76z