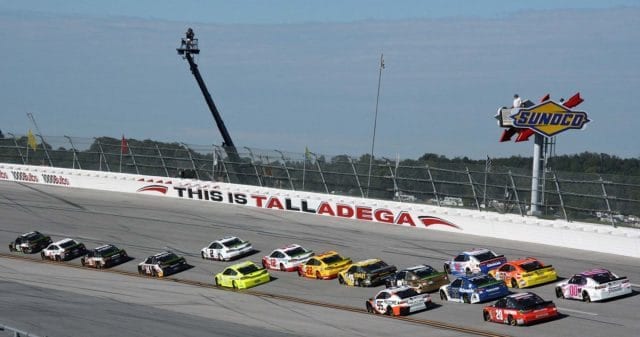 The cream always rises to the top during the NASCAR Playoffs and on Sunday (Oct. 14), that was exactly what happened. Stewart-Haas Racing made a statement at Talladega that they aren’t to be overlooked, especially after their collapse at Dover. The remainder of the field was two steps behind the SHR organization and they must feel grateful this event was the last restrictor plate race for the year.

Behind them, four drivers left Talladega feeling uneasy as they sit on the outside looking in with just one race left in the Round of 12. But only two drivers can feel 100 percent safe, guaranteed into the Round of 8 while the rest will be set on Sunday at Kansas Speedway.

Who was able to stay within the same zip code as SHR in the Frontstretch Cup Series Power Rankings after Talladega?

Kevin Harvick was part of SHR’s domination Sunday, leading 46 laps in the 1000Bulbs.com 500. Harvick did everything he needed in order to put himself in a good position as the series heads to Kansas. Harvick will enter this Sunday’s race in a position much like he entered the Charlotte ROVAL event. He will just have to start the race to push his way into the next round as he sits 63 points above the cutline.

With the NASCAR Camping World Truck Series race airing on FOX on Saturday (Oct. 13), Kevin Harvick also returned to the booth and put on a quality performance. If this racing thing doesn’t work out, maybe Harvick has a future in broadcasting.

Unlike Harvick, Brad Keselowski isn’t in the same shoes as he was heading into round one’s elimination race. Running out of fuel on the last restart really plagued the team on Sunday after he led 21 laps. But honestly? Team Penske was simply outrun at a track it has straight up dominated lately.

Keselowski isn’t in a must-win situation but he does need a solid afternoon at a track he has one career victory at (2011). An 18-point deficit can go either way depending on the performance the team puts out on Sunday.

After winning three-straight races leading into the #NASCARPlayoffs, Brad Keselowski finds himself below the cutline alongside Team Penske teammate Ryan Blaney. pic.twitter.com/xTnDGWvbbh

Finally, Aric Almirola was able to earn that elusive victory with SHR. He puts his name on a list of drivers like Ryan Newman, Tony Stewart, Harvick, Kurt Busch, and Clint Bowyer as full-timers to secure a victory with the organization. Only one driver in NASCAR history did not secure a win while driving full-time with SHR and that was Danica Patrick.

Almirola is headed to the Round of 8 after his victory on Sunday, a place many never expected to see his name. Most had written off the No. 10 car by this point but Talladega’s victory shut the naysayers up.

We did it! We've been close so many times this year & we finally brought home the win today. Can't thank everyone enough for believing in me & giving me a chance. What a day this was! So proud and humbled to be moving onto the Round of 8 in the #NASCARPlayoffs!#SmithfieldRacing pic.twitter.com/IXm6l9Lp2M

Kurt Busch’s day in Talladega reminded me of racing in career mode on NASCAR Thunder 2003 where you had to manage your fuel. Busch was so close to having enough to cross the finish line and go to Victory Lane for the second time in 2018. But that “so close” was the part that hurt the most at Talladega.

Busch is 30 over the cutoff line, meaning he really only needs a solid and clean afternoon to move on to the Round of 8.

When the neighbors keep it too real…. ?? pic.twitter.com/lfYJHFCcu4

Unlike his Team Penske teammates, Logano had enough fuel in the end and earned a top-five finish. That keeps him in good standing as the series heads to Kansas. Logano is proving that he’s one of the most consistent drivers when it comes to the playoffs and if you can’t be lucky, you need to be consistent.

Logano enters Kansas, a track he has won at before in his career, with a 39-point buffer over the cutoff line. The most sure way for Logano to move on would be for him to win the race, as he did in 2014 and 2015.

Restrictor-plate tracks like Talladega Superspeedway require so much more than pushing the loud pedal.

Take a ride with Joey Logano to see how he handles the corners at fast speeds. #TeamJL pic.twitter.com/wkeWFMukbl

Chase Elliott was collected in that final-lap accident which hurt his chances at earning a strong finish on Sunday. It didn’t really matter, though, because he had already punched his ticket to the Round of 8 by winning at Dover. There’s one more race left for the No. 9 team to go all out with little to no repercussions.

An interesting statistic pointed out on Twitter is that the last three winning drivers — Elliott, Ryan Blaney and Almirola — have all earned their second career victories. AJ Allmendinger, Trevor Bayne, Chris Buescher, Erik Jones, Paul Menard and Regan Smith can all make that four races in a row at Kansas, though none of them are in the NASCAR playoffs.

This weekend was a struggle for Kyle Busch at Talladega and it showed on the results page. Busch was involved in the last accident of the day and finished the race in 26th.

The playoff points he gained during the regular season and during the first round of the playoffs help Busch sit in a strong position heading to Kansas, though. He has a 46-point cushion over the cutoff line.

BOWLES: BIG THREE NOT COMING UP BIG IN NASCAR PLAYOFFS

That was on display during the first round elimination race at Charlotte and will be on display at Kansas on Sunday. Martin Truex Jr. hasn’t been able to acquire those important points during this round and it has him in a sketchy position, which could see the first of the Big Three get eliminated. Give-or-take, Truex still landed a good finish on Sunday (23rd), but that doesn’t matter when it comes to point totals.

When Clint Bowyer got back home to Kansas, he saw a dramatic weather change from the warmer climate of Alabama.

Bowyer sealed the deal in the end by finishing second to his SHR teammate, but it still wasn’t enough for him to feel comfortable as the series heads to Kansas. He only has a 21-point margin over the cutoff line and, if someone below earns the victory, Bowyer could end up eliminated.

That Dover accident could sting more than they anticipated.

Left @TalladegaSuperS it was 84 outside. Landed in KS in time to watch Chiefs with my buddy. Just walked outside to get in vehicle to go home. 29 and snowing!!!! ? pic.twitter.com/Ph8CaY60B2

Denny Hamlin becomes the first non-playoff driver to make our power rankings since the postseason kicked off. Hamlin was a member of the playoffs before being eliminated after the first round. He has put together two straight top-five finishes which makes us wonder what could’ve been had he made the next round.

Its simple… ALL the SHR cars are super fast this year compared to last year…. over the off season, in the air tunnel and chassis building shop, SHR has found some magic trick that makes their cars faster than most of the other teams at ALL the race tracks, not just at some. These things go in cycles, look at Jimmy Johnson and how crappy his cars are this year compared to others… he is a great driver and most races his car is a 10 – 15 place dud. So, Aric got lucky by one year and Danica got screwed by one year… proof? Danica, who always was good at Daytona and Talladega, qualified in 31st spot last year at Talladega. 31st!!!
And most of the time she must have had the dregs of SHR because they knew she was going and most races her cars were shit slow off the hauler, crappy slow in the race… even at tracks where she used to run well. AND, on top of that, she got wrecked so much last year… almost all the time because of other moron drivers wrecking and collecting her… she had 12 DNFs out of 30 some races… almost 1 in every 3 races…
So, for the morons and idiots who know nothing about NASCAR racing but talk like they do… do not compare Aric and Danica… two totally different situations.
Good luck for Aric and tough luck for Danica.