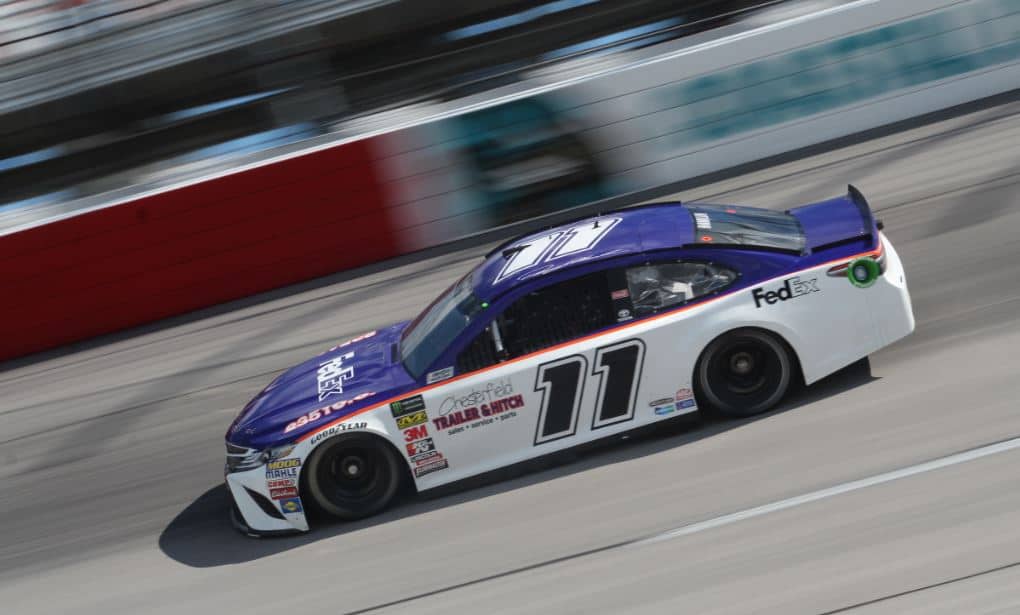 Joe Gibbs Racing’s Denny Hamlin dominated Darlington in 2017 with wins in both the XFINITY and Cup races. He returned to the scene of last year’s success and picked up right where he left off. Hamlin turned a lap at 172.287 mph during the opening practice to lead the entire day Friday (Aug. 31).

Alex Bowman ran the fourth fastest lap of the session with a lap at 171.980 mph. The final driver in the top five of the first Cup practice was Ryan Newman. The driver once known as the best qualifier in the sport went 171.926 mph around Darlington’s egg-shaped oval. Hamlin and Paul Menard were the two fastest drivers in the 10-lap average. Both turned their averages over their first 10 laps of practice. Hamlin’s average was 168.715 mph while Menard’s average was 168.228 mph.

For Jamie McMurray, he ran into trouble almost immediately. On his first lap at speed, the engine blew in his McDonald’s 50 Years of Big Mac Chevrolet. While he coasted across the line to set a time, the team had to change the engine. McMurray will have to start from the rear of the field regardless of how well he qualifies on Saturday.

39 teams set times in the session.  StarCom Racing’s Derrike Cope did not complete a lap during the session.

Air temperatures Friday afternoon exceeded 90 degrees Fahrenheit with a dewpoint over 70.  The track was slippery, making it very difficult to put down a good time.  Also, given the high tire wear, most of the fastest times were set right at the beginning of the session.

12 drivers set their fastest time in final practice their very first lap around the track. Newman was the fastest of all of them, turning a circuit around Darlington’s historic 1.366-mile oval at an average speed of 171.698 mph. Chase Elliott was runner-up in the final practice with a 171.512 mph lap. Third quickest in the session was Jimmie Johnson. The seven-time champion ran a lap at 171.023 mph. Kyle Busch bested his brother Kurt for the fourth best time of the practice. Busch’s lap was at 170.922 mph while Kurt rounded out the top five in final practice with a 170.365 mph circuit.

The best 10-lap average top five was comprised of drivers on their first 10 laps of the practice. Kyle Busch was on top of the chart with a 166.952 mph average. Alex Bowman was in the second slot with an average of 166.907 mph. Kevin Harvick was in the third position on average with 166.581 mph. Ryan Blaney was fourth on average with 166.236 mph, just ahead of Denny Hamlin who averaged 165.269 mph.

Aric Almirola was 11th quickest on single-lap pace and 13th quickest over a 10-lap run.  Unfortunately, he made friends with the SAFER Barrier in the process.  Luckily, it doesn’t appear that the contact will Almirola all that much.

Got a little Darlington stripe already, but no harm done. ? We've got another fast @SmithfieldBrand Ford. Looking forward to qualifying tomorrow. ?#SmithfieldRacing pic.twitter.com/3v1cHXQ3FS

Happy Hour saw teams go out for much longer runs at the hottest time of the day.  Joey Logano, who was 12th fastest, completed the most laps in the session (62).  Afterward, he described the heat on NBCSN’s NASCAR America as being just as bad as Chicagoland or worse.

24 of the 40 teams entered completed a 10-lap run during the session.  Of those 24, Kyle Busch was fastest at an average of 166.952 mph.  Bowman was next, followed by Harvick, Blaney and Hamlin.