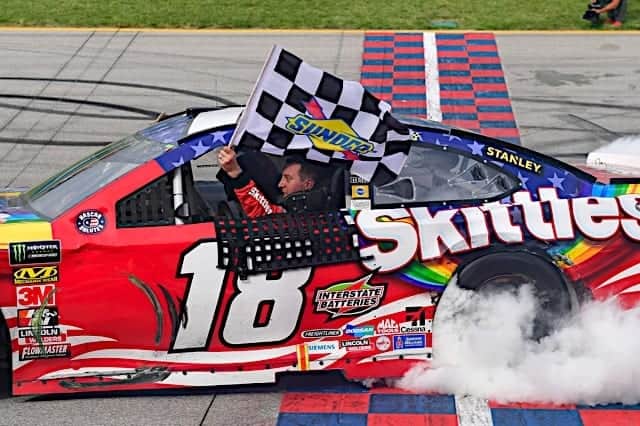 The Monster Energy NASCAR Cup Series throws back to the good ol’ days this weekend at Darlington Raceway. The Bojangles’ Southern 500 is one of the crown jewel races at the MENCS level and many drivers will be paying respect to those who came before them with tribute paint schemes. The green flag for the penultimate race of the regular season flies at 6 p.m. ET on Sunday (Sept. 2).

Also, with only 0.1 points awarded for each lap led by a driver, the need for a dominator is less important when building a winning lineup. The 500-lap race will only have a total of 50.0 points up for grabs in this category. Take note when building your roster and focus on mid-pack drivers who can climb up toward the front on race day.

The current MENCS points leader only has one win at Darlington, but don’t be fooled; he’s been the driver to beat multiple times over his 13 starts at the track. Busch led 265 laps in a sixth-place effort back in 2013 and has been out front in three of the four races since. He was the runner up in this race a season ago and is motivated to bounce back after a rough Bristol (20th).

There is no hotter driver on earth than the driver of the No. 4 Stewart-Haas Racing Ford. The 2014 series champion has seven MENCS wins already this season and is on pace to eclipse the double-digit mark for the first time in his career.

Harvick has also been fantastic at Darlington. He was the winner in 2014 and has finished inside the top five in two of the three races that followed. Leading 200+ laps in two of the last four Southern 500s, put him on the top of your favorites list as he seeks to conquer the Lady In Black a second time.

Truex has the best average finish among the “Big Three” drivers at Darlington. He has one win and two additional top-10 finishes in the past three Southern 500s. Only twice in 12 career starts at the track has he finished outside the top 15.

Truex is priced significantly lower than both Busch and Harvick, likely due to drama surrounding the future of his team, Furniture Row Racing. But despite some underwhelming practice speeds (15th and 24th, respectively on Friday) expect the No. 78 to charge toward the front.

Larson has the second-best average finish among all active drivers at Darlington. In four career starts, he has three top-10 finishes and one 14th-place result. But 14th does not give credit to how dominant he was during the race last season. Larson started fourth and led a race-high 124 laps before fading late in the event.

Larson has not been nearly as consistent in 2018 as we saw from him the past couple of seasons. However, he’s figured out Darlington right from the start and has yet to be a big disappointment from a fantasy perspective.

If there is one driver outside the Big Three to focus on this weekend, it would be the defending race winner. Hamlin started ninth and led 124 laps en route to the checkered flag in 2017. That victory was his seventh top-five finish in 12 career starts at the track. In fact, he has finished inside the top five in six of the last eight races at Darlington. That total also includes a second win back in 2010.

Hamlin has more success at the Lady In Black than any other driver in the field. With a chance to lock up a playoff spot with a win, he will have even more to race for on Sunday.

Newman is nowhere near the driver he was in his prime, but he can still wheel it at Darlington. He has two straight top-10 finishes at the track and four in the last five races. In all but one of those events, Newman finished higher than where he started. He is also priced low enough to the point where he can be lumped in with two top-tier drivers; that’s despite leading the final practice session Friday.

If Newman can pull off even a top 12-to-15 finish, that will be plenty good enough to warrant having him in a lineup. Keep in mind the No. 31 team must also win to lock up a playoff spot; they’ll be putting their best foot forward these next two weeks and getting aggressive.

The eldest Dillon brother sees a price hike this weekend. His $8,700 salary is a bit higher than it has been in the past couple races. But even with the jump, Austin is still within the bargain tier, bringing a nice upside to any roster.

In four races at Darlington, Dillon has an average finish inside the top 15. He has finished 12th or better in three of his four races and ran fourth last year, setting his career high.

Younger brother Ty has only made one start at Darlington at the Cup Series level. In his debut in 2017, he started 25th and finished 13th. Darlington is a tough track to pass cars at, so seeing him able to jump inside the top 15 is a big deal. He was also the biggest mover in the race and will be a sneaky driver to keep an eye on for this weekend. If he starts toward the back of the pack, keep him in mind. 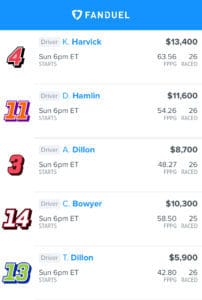