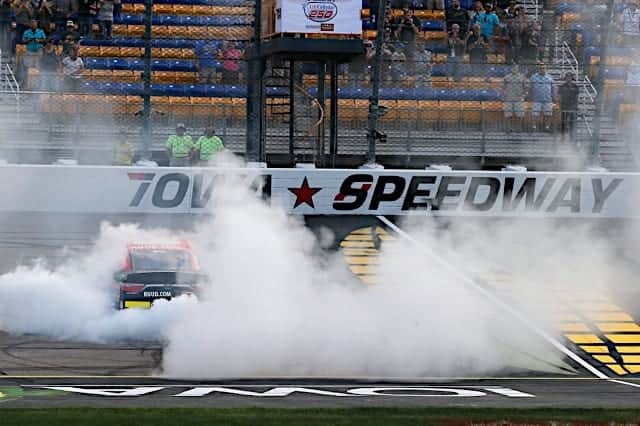 For the first time in nearly 20 years, Christopher Bell, who led 94 laps, won his third consecutive race when he beat Justin Allgaier to the checkered flag in Saturday’s U.S. Cellular 250 at Iowa Speedway. The last time a driver won three NASCAR XFINITY Series races in a row was in 1999 when Dale Earnhardt Jr. accomplished the feat.

Despite a flurry of late-race cautions, a red flag and losing the lead on the first of two overtime attempts, Bell prevailed after a full-contact, side-by-side battle with Allgaier.

How did it all go down at @iowaspeedway?

Kyle Benjamin, who made his final scheduled start with Joe Gibbs Racing, wound up third. Ross Chastain and John Hunter Nemechek rounded out the top five.

With just two yellows before the conclusion of stage two, three more cautions flew in the final 20 laps, one of which resulted in a 17 minute, 18 second red flag period to clean up the track before a second attempt at overtime.

Bell leaves Iowa with a 16-point advantage over Sadler, while Custer sits third in the championship standings. Daniel Hemric and Justin Allgaier round out the top five.

Disaster almost struck eventual winner Bell when Chase Briscoe, who was fighting to stay on the lead lap, spun directly in front of Bell inside 20 laps to go. The driver of the No. 60 Ford just got loose and spun on his own before getting clipped by the leader. The ensuing yellow erased a nearly five-second lead Bell had over Custer. Despite the spin, Briscoe utilized a free pass prior to the second overtime period and recovered for a 10th-place finish.

Only slight damage to both cars, but did @CBellRacing flat spot the tires?

Up and down day at Iowa, felt awful for spinning out in front of @CBellRacing, I was just doing everything I could trying hard and got just a little to sideways. Salvaged a top 10, onto the next one.

While Ryan Truex has not managed to score his first career XFINITY Series win, he continues to shine in the No. 11 Kaulig Racing Chevrolet. His eighth-place finish in Iowa marks his eighth top-10 result this season, which best the five top 10s last season with Blake Koch behind the wheel. Truex currently sits eighth in the championship standings with a comfortable 131-point cushion over Nemechek, who is the first driver outside the playoff field.

While the yellow flag was out over the field for a spin by Vinnie Miller, Chad Finchum pulled off of the racing surface with smoke billowing from the No. 40 Toyota. According to a video posted on Finchum’s twitter feed, a brake caliper broke off, causing brake fluid to spill all over the rotor, sparking the fire. The damage to the car was enough to end his day in 37th.

After leading 41 of the first 82 laps, Elliott Sadler faded outside the top five by the end of stage two and he never really recovered. Despite his best efforts and having a stout car to begin the race, the driver of the No. 1 Chevrolet was a complete non-factor as the laps wound down. He wound up sixth by the time the checkered flag flew after struggling with a tight car for much of the day.

Tyler Reddick likely wants to just forget Saturday afternoon’s race at Iowa Speedway. Following a solo spin in practice, the driver of the No. 9 Chevrolet qualified fifth and utilized the low line early. But just 20 laps into the race, he suffered a cut tire that tore apart the left rear corner of the car, leaving Reddick to limp his way around the track with an incredibly loose racecar. By the time the checkered flag flew, he ended up 22nd, five laps down.

Tough break for our @takl_app team. The most ever so slight contact with @AustinCindric cut our LR tire, would have been no big deal but the tire carcass ripped out our radio and I lost all communication with our team. On to the next one.

Much like Reddick, Max Tullman probably would like to forget his first career XFINITY Series start. He qualified 26th and ran outside the top 20 for much of the race just logging laps and gaining experience. But on the first overtime attempt, he and Matt Tifft got together somehow (there was no replay on the race broadcast), bringing out the caution and a red flag period to clean up the track. Tullman walks away from his series debut with a 30th-place finish.

The aftermath of the Nos. 2 and 26 after this incident. #USCellular250 pic.twitter.com/30so43WxG7

Since there was no replay, just wanted to say it wasn’t @matt_tifft fault for getting into me! There was another car involved that got me sideways and Matt had nowhere to go! Just a racing deal. #NASCAR

Ross Chastain matched his career-best finish with a fourth-place run at Iowa Speedway. After running outside the top 10 for much of the race and suffering a pit road speeding penalty, the long green flag run, coupled with three cautions in the final 20 laps, allowed the driver of the No. 4 to move to fourth before the checkered flag flew, tying his career-best result from last season in Iowa.

“It was good all day. Our worst run was the first run of the race and then from there we threw a bunch of stuff at it and from there it took off,” Chastain told Motorsports Tribune. “We only made minor adjustments at the end. It got so crazy and we lined up in the right spot and were able to roll with just the right amount of speed to clear guys when we needed to. It’s a product of a good race car though

“Running as many races as I can this year has helped for those late-race restarts. It probably hurts sometimes when I try to overdrive and get too much, I’ve been crashing quite a bit. We got fortunate at the end but honestly though we were a top-10 car which was really cool.”

Chastain’s first top five of the season has him sitting 12th in the championship standings with a slim five-point advantage over Nemechek.

Given that it was a standalone race at Iowa Speedway while the Cup and Truck series raced at Pocono Raceway, the list of double-duty drivers is quite short this week. Gray Gaulding practiced and qualified the No. 15 Chevrolet for Chastain at Pocono while he raced in Iowa. Though Gaulding was 22nd-quickest in qualifying, Chastain will start at the rear of the field following the driver change.

“When it’s your day it’s your day. I’ll take them any way I can get them, man. Our Ruud Camry was really, really good. I’m just thankful that we were able to get Ruud in Victory Lane. This was their first win. My crew chief Jason (Ratcliff) just kept making the car better and better and better and just praying for no yellow there on that long green-flag run and then it came it just came time to execute on restarts. I let one get away on me, but this thing was just so good I was able to come from the second row and get there.” Christopher Bell

“It’s just disappointing to get run over. I know that Christopher (Bell) definitely had the best car. It’s a good day at Iowa. 1-2 in the two races here. I know social media’s going to blow up. They’re going to hate me for being mad at Christopher, but it is what it is.” Justin Allgaier

“Right there on the final restart I had a really good car that I needed on the short run, but that red flag, everyone was going to cool their stuff off and it was going to be tough. If I had had a few more laps, I could’ve gotten him (Christopher Bell). Everybody having cool tires put us on an even playing field and I knew it was all about the start right there if I could get three-wide and somehow get them both off of turn 2. I would’ve had them, but the 42 (John Hunter Nemechek) pushed me all the way through the center and I lost my turn and when that happened I got back. I want to thank Toyota for helping me out and just really glad to have this opportunity. Can’t thank them enough.” Kyle Benjamin

Any time the XFINITY Series runs a standalone event, it’s the perfect opportunity for series regulars and up-and-coming drivers to shine and steal the spotlight, and that’s exactly what happened. Featuring three- and sometimes four-wide racing, especially on restarts, it was a captivating race that was often more entertaining deeper in the field than up front.

With that said, Custer and Bell put on multiple battles for the lead before Allgaier and Bell did the same on the second overtime attempt. Bell has to be a clear championship favorite with a series-leading four wins this season and a whopping 24 playoff points in his pocket.

The XFINITY Series heads to Watkins Glen International next Saturday afternoon for the first of three road course races in the next four weeks. Last season, Kyle Busch led 43 laps en route to the victory over Team Penske teammates Joey Logano and Brad Keselowski. Coverage for the Zippo 200 begins at 3:30 p.m. ET on NBC.