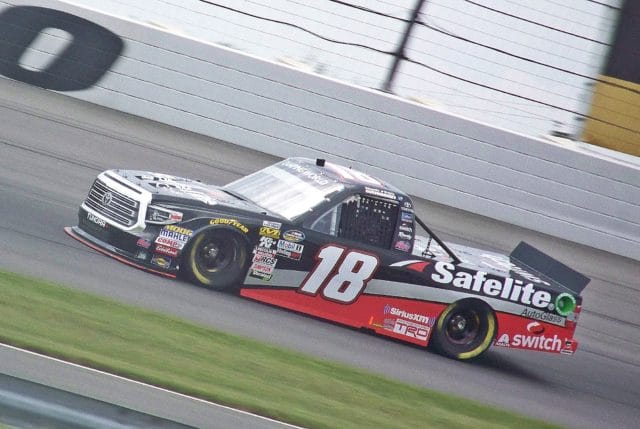 Busch, who’s entering his final Truck Series race of the season, led opening practice on Friday Afternoon under cloudy skies. His Kyle Busch Motorsports teammate Noah Gragson finished the session in second, 0.035-seconds off of the No. 51 Toyota.

Twenty of the 32 trucks entered in Saturday’s event turned at least one lap during the session. Myatt Snider turned the most laps with seven, while five drivers turned just two laps, the least amount of the field.

As the session was progressing, lightning put the session on hold and ultimately put an end to the session awarding Busch the fastest time.

Gragson led the final practice session of the weekend for the NASCAR Camping World Truck Series. Myatt Snider, who is one of those drivers needing a good run this weekend for playoff’s sake, finished the session in second with a 168.026 mph lap around the “Tricky Triangle”.

After leading a chunk of the long session, Justin Haley turned the third quickest speed, followed by Grant Enfinger and Johnny Sauter.

Thirty of the 32 entered trucks turned at least one lap in the session, with Bo LeMastus turning the most at 27. JJ Yeley and Bayley Currey turned the least amount of laps during the session with one apiece.

The final practice session was stopped twice. Brett Moffitt came to a complete stop on the access road leading to pit road late in the session. Hattori Racing reported on Twitter that they will be going to a backup engine.

Ben Rhodes went back out during late in the session and ended up making contact with the outside wall. He will be going to a backup truck, meaning he and Moffitt will both start from the rear of the field in Saturday’s (July 28) Gander Outdoors 150.

Despite the threatening forecast and skies, all NASCAR Camping World Truck Series action that was slated for Friday (July 27) was completed as planned.