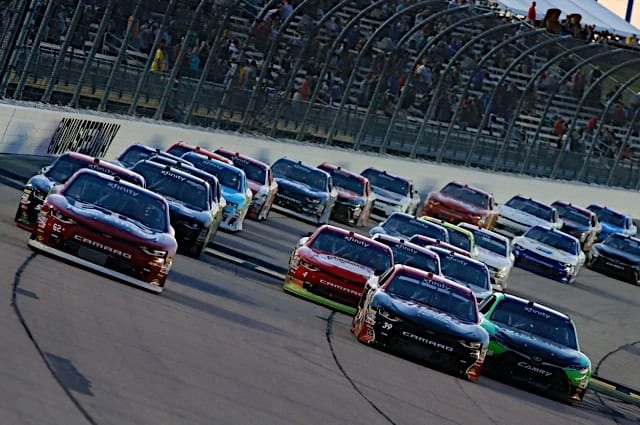 After an exciting race at New Hampshire Motor Speedway, the NASCAR XFINITY Series heads to Iowa Speedway for the second time this season on Saturday, July 28.  The race will serve as a standalone event for the series while the Monster Energy NASCAR Cup Series competes in Pocono.

40 cars are on the preliminary entry list this weekend competing for 40 spots. There are several driver changes to note as the series shifts back to the Midwest.

Shane Lee will be back behind the wheel of the No. 3 car for Richard Childress Racing.  In Lee’s last outing, he ran sixth at Daytona, his best career finish to date.

Kyle Benjamin also returns to the NASCAR XFINITY Series driving the No. 18 Toyota for Joe Gibbs Racing.  Benjamin has one start this season, which came at Atlanta Motor Speedway, and scored an eighth-place result.  In six career starts, he has two poles, one top-five and two top-10 finishes.

Austin Cindric will be in the No. 22 car for Team Penske after driving for Roush Fenway Racing last weekend at New Hampshire. Cindric won the pole with this team the last time the series visited Iowa back in June.

Two young guns will be making their series debuts this weekend.  Casey Roderick will drive the No. 23 car for GMS Racing as Spencer Gallagher steps aside for a week. Then, there’s Max Tullman, who will drive the No. 26 car for a new XFINITY Series team: Tullman-Walker Racing.

Roderick currently races late models and has had tons of success following his brief departure from NASCAR after the 2012 season.  He has 11 career XFINITY Series starts with a best finish of 20th.  Tullman races in the ARCA Racing Series presented by Menards and has eight starts this season, earning a best finish of sixth.

Another part-timer, Chase Briscoe, returns to the No. 60 Ford for Roush Fenway Racing for the first time since finishing 9th at Chicagoland.  Briscoe also scored the victory in the Dirt Derby 150 at Eldora Speedway for NASCAR’s Camping World Truck Series last week.