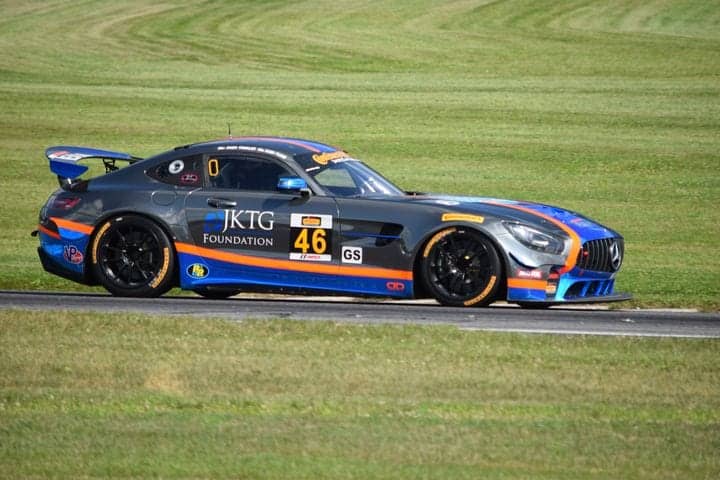 TeamTGM’s Hugh Plumb and Owen Trinkler were able to hold back the pack in the second half of the race to win Saturday’s Lime Rock Park 120.  It is the first-ever victory for TeamTGM in the IMSA Continental Tire SportsCar Challenge.  It is also the first victory for the Mercedes-AMG GT4 in North America.

“It’s unbelievable, I can’t thank Ted Giovanis [enough] and everyone at TeamTGM for giving me this opportunity to drive the No. 46 Mercedes-Benz-AMG,” Trinkler said after the race.  “The boys had a great setup, great pit stop.  We rolled off the truck yesterday and felt really confident in what we could do.”

Rennsport One’s Spencer Pumpelly started from the pole and led the race early.  Trinkler was never all that far away.  The two drivers battled extensively for the overall lead, but Trinkler was unable to get past.

The first full course yellow came out 45 minutes in when AJ Riley‘s Mazda MX-5 stalled on the No Name Straight.  With the minimum drive-time having just been achieved, almost everyone stopped for fuel, tires and a driver change.  For the leaders, this turned out to be the one and only stop of the race.  Hugh Plumb got into the No. 46 and beat Dillon Machavern in the No. 28 out of the pits.

Quest Racing’s Alexandre Premat stayed out to take the lead, but tires were quite important on Saturday at Lime Rock.  As a result, Hugh was able to run down Ramsey and take the lead a couple of laps after the restart.  Once out front, Hugh was able to slowly expand his advantage.  The lead was up to five seconds before a full course caution came out with 29 minutes to go due to a crash in Big Bend involving Bodymotion Racing’s Joe Robillard and Multimatic Motorsports’ Chad McCumbee.

Both drivers were ok after the crash, but were done for the day.  Once the race resumed with 15 minutes to go, Hugh opened up a small gap and that was enough to give TeamTGM the victory.

The margin of victory was 1.879 seconds over Winward Racing/HTP Motorsport’s Indy Dontje and Bryce Ward in Winward’s spare chassis.  Dontje charged from sixth at the final restart to get past Machavern on the final lap in his Mercedes.  Machavern and Pumpelly had to settle for the last step of the podium.  Compass Racing’s Paul Holton and Matt Plumb were fourth, while Murillo Racing’s Eric Foss and Jeff Mosing were fifth.

TCR was dominated early on by eEuroparts.com Racing’s Tom O’Gorman.  From the pole, O’Gorman moved up to 16th overall prior to the caution for Riley’s issues.  A slow pit stop allowed Compass Racing’s Tom Long to jump the No. 12 Audi in the pits and take the class lead.

O’Gorman’s teammate Kenton Koch was able to retake the lead and led into the closing moments of the race.  Enter the JDC-Miller MotorSports Audi into the scene.  Stephen Simpson ran down Koch in the final laps and made a move to the inside exiting the Diving Turn coming to the white flag.  Simpson cleared Koch before the line, but Koch made an ultra-aggressive move into Big Bend to retake the lead.

Simpson followed Koch until the Diving Turn once again.  Exiting the final turn of the race, Johnson moved to Koch’s inside and outdragged him to the line to take a spectacular victory.  It is the first victory in CTSC for JDC-Miller MotorSports and both Simpson and co-driver Michael Johnson.

Johnson, who is paralyzed from the waist down as a result of a non-racing accident, races with hand controls that can be pushed aside for Simpson to drive normally.

“I have been thinking about this win coming in professional racing since I broke my back,” Johnson said after the race.  “This is all the hard work over the years coming together and everyone gets to see that.  It makes me so proud that I can prove to everyone that I’m the same as everyone else and that I deserve to be here.”

With the relatively small gap in speed between the Grand Sport and TCR cars, Simpson and Johnson finished 10th overall, one lap off the overall leaders.  Compass Racing’s Rodrigo Sales and Kuno Wittmer were in class, eight seconds back.  Long and Britt Casey Jr. were fourth, followed by Lee Carpentier and Kieron O’Rourke in the second eEuroparts.com Racing Audi, two laps down at the finish.

Street Tuner saw BimmerWorld Racing’s Nick Galante led from the pole and pulled out an advantage of over six seconds over MINI JCW Team’s Colin Mullan.  Meanwhile, Bodymotion Racing’s Jason Rabe had contact with the Strom Motorsports TCR entry driven by David Depillo on Lap 2.  Rabe ended up in the Armco right before the Climbing Turn, which significantly damaged the team’s Cayman.  Rabe resumed after a pit stop five laps down to the rest of the class while Depillo was out on the spot.

During the first full course caution, everyone stopped for fuel, tires and a driver change.  During this sequence, both the No. 52 MINI with Mark Pombo at the wheel and the No. 73 MINI of Mat Pombo got out ahead of the BMW with Devin Jones at the wheel.

The Pombo brothers then had a duel of their own, something that has been somewhat rare in their careers since they’ve most driven together as teammates.  With 40 minutes to go, Mat was able to get the better of his brother Mark and take the lead.  From there, Mat held on to take his and teammate Mike LaMarra‘s second win of the year.

BimmerWorld’s BMW 328i of Galante and Jones were two-thirds of a second back at the finish in second.  Mark Pombo and Mullan had to settle for third.

The IMSA Continental Tire SportsCar Challenge will be back in action on Aug. 3. at Road America for the Road America 120.