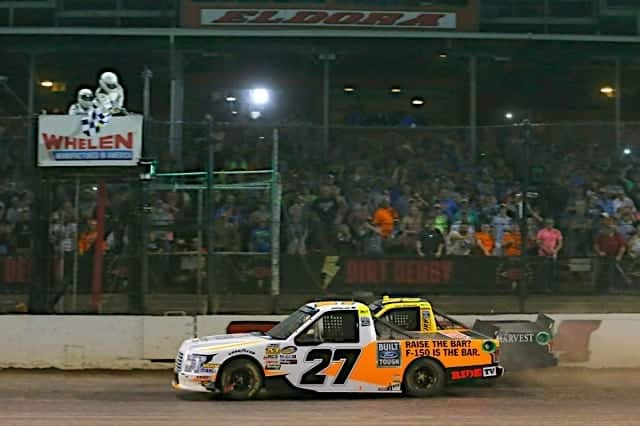 Anybody watch any good races this week?

Following the sixth installment of Tony Stewart’s salute to sediment, the racing world, fans particularly, are clamoring for an expansion of the midweek, new summer classic at Eldora Speedway. What started as a novelty event when Stewart acquired the facility back in 2008 has established itself as one of the premier, must-see events of the NASCAR season. This without Cup driver participation (save for Ryan Newman‘s cameo in Jordan Anderson‘s No. 3 Silverado and Ty Dillon in Young’s Motorsports’ No. 12), or a lot of exposure beyond the daily NASCAR shows on TV and satellite radio. Naturally, the next step would be to expand the reach of Rossburg, Ohio, to the next rungs of the touring series, right?

Well, not so fast.

In recent years, NASCAR has taken much criticism (some of it rightly so) for its slow response to fan feedback and some of the glaring on-track issues. Some of it has gone the other way, from the championship-format-of-the-year exercise of the past decade-and-a-half to the over enthusiasm of the All-Star Race package – only to be rebuffed by teams. With six years of success, and some good learning gleaned along the way (19 of the final 24 laps run under caution, anyone?) to apply to future installments, there are obviously many pros, but also a few cons to making dirt a new discipline in NASCAR.

Besides the fact that everyone almost universally loves it, it helps level the playing field and cut costs quicker than anything. Kaz Grala‘s 10-year-old restrictor plate show car thinks that the hand-me-downs used Wednesday night were as throwback as any paint scheme that you’ll see at the Southern 500 in September. Short tracks used to be the great equalizer among teams, where you’d get to see some new blood up front, where wind tunnel-derived downforce wasn’t the order of the day. Drivers you never heard of until last night were suddenly mixing it up with the regulars, while perennial contenders and champions like Johnny Sauter were having a rough go of it. If there’s a way to shake up the status quo and breathe some much-needed new life into these races, this is a quick way to do it – particularly for the XFINITY cars.

Remember a few years ago when Rockingham Speedway was restored and ran a Camping World Truck Series race at it? It had a decent turnout, but far from a sellout. The next race there was an ARCA race, which resembled… well, pretty much any ARCA race. Fans have been quick to show up with pitchforks and torches anytime nostalgia is embraced, but is this something to bring to all three series? The XFINITY cars would be fun to watch at Eldora, though Cup might be a bit of a stretch. In recent years, more road course races had been something many fans were asking for, particularly in the playoffs A two-day show of Truck and XFINITY cars would be interesting, especially if they were ran on the same day on a Saturday. At this time of the year during the All-Star break, you’d have a wide-open weekend schedule to promote on prime time television.

As for the Cup Series, I’d like to see it stick to asphalt. If you want to do something special, have it star at former NASCAR hallmark short tracks like Nashville Speedway or Hickory Motor Speedway. Yes, I know North Wilkesboro Speedway exists too; I see someone post it three times a week on several NASCAR groups on Facebook. I love it too, but it’s not coming back.

The place would look absolutely packed on TV. One of the most striking scene in recent years has been the aerial shot of empty seats at any Truck, XFINITY or Cup series event. Contrary to what internet memes proclaim, no, NASCAR didn’t die with Dale Earnhardt (ratings and attendance figures through 2007 prove dramatically otherwise), but it’s not the clear-the-schedule, blow-$2,000-on-a-race-weekend-with-the-family event anymore either. Fair ticket prices, dirt-cheap concessions and a great atmosphere of being part of something new made the sea of people circling the track and watching from surrounding structures reminded me of the early 1990s, where there weren’t always 100,000 in the stands but people sat where there were seats and would stick a lawn chair there if you let them. Who wants to spend $100 and an afternoon if you’re watching it on TV and it looks like nobody is there? We need to start making this stuff look special and exciting again.

What track is going to be willing to surrender a date to Smoke and Slack, simply for the betterment of the sport? They aren’t running a charity, after all. They would have to be rewarded handsomely, and that would likely not be a tenable business model. Is there room on the schedule to jam in another date? What is the added cost of the teams for doing so? Would this start a chain reaction of retraction where XFINITY cars slowly back away from being big-track companion races with the Cup Series and start running smaller venues again like Lucas Oil Raceway or Myrtle Beach Speedway? Yes, please.

Something new and totally different would be nice, and the morbid curiosity of the unknown will attract new eyes or those old fans who swore up and down that they were done with NASCAR and were going to just stick to their local tracks (which run at completely different times) from now on. The ROVAL test at Charlotte Motor Speedway this week was a great example. Were there a lot of spins and crashes? Yes. Will it be complete mayhem for the playoffs? Absolutely! We may be at the point where NASCAR has literally exhausted all its ideas and will come full circle back to racing on dirt to get new fans interested again. Maybe after this we can try bias-ply tires again? I know, Goodyear only wants to race what it sells. And everyone with a Camry or Fusion is mounting up a new set of slicks every 30,000 miles.

Does NASCAR run the risk of looking too desperate? Are we just swinging at the fences anytime a vocal voice in the series says the want something to happen and the mob rule drives decisions? Or are we at a point where the sport has nothing left to lose? Lowe’s and 5-Hour Energy are exiting after this season (with eight championships between them), with premier series sponsor Monster Energy out in 2019. You can only have so many stages, brackets and seats painted like spectator’s shirts before you’re out of ways to create the illusion that all is well. Will such a pendulum swing start to spook other sponsors, or is it the shot in the arm and a dose of reality of where we are that the sport so desperately needs?

I’m in, let’s do it. Consolidate some track dates, wheel in some temporary seating and get this thing going. If more people still aren’t going to watch, then to hell with them too. We might as well at least enjoy it while we can.