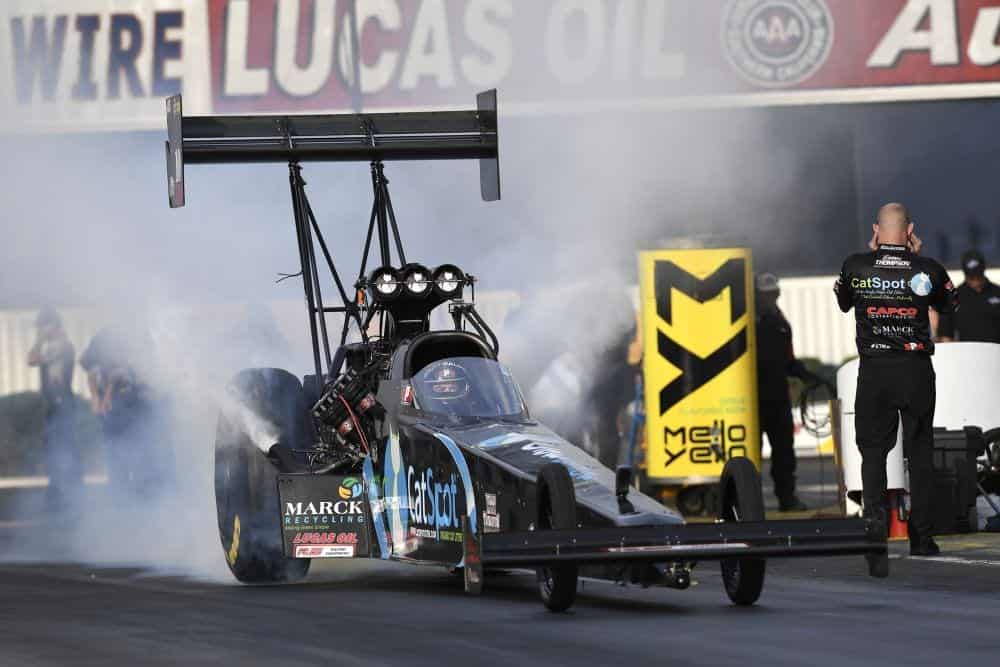 OK, not exactly line dancing, but it is time for the Western Swing — the NHRA’s annual three-race trip to the West Coast, which begins this weekend with the Dodge Mile-High Nationals from Bandimere Speedway outside of Denver. The special extra bit of intrigue this race provides is the altitude, as it’s the only race in the thin air, held 5860 feet above sea level in the Rocky Mountains of Colorado.

The following weekend, in the next stop on the Western tour the racers will visit Sonoma Raceway in California for the Toyota NHRA Sonoma Nationals. The final stop on the three-leg swing takes place near Seattle in Washington, at Pacific Raceway, with the CatSpot NHRA Northwest Nationals.

While it doesn’t pay extra points or a trophy, sweeping the three-race swing does bring some bragging rights, not least of all because it is rare. Only seven drivers have done it, Joe Amato, John Force, Cory McClenathan, Larry Dixon, Greg Anderson, Tony Schumacher and Antron Brown. The most recent of those was Brown in 2009. No one has done it twice, but four of the above — Force, Anderson, Schumacher and Brown — will have the opportunity to try.

Incidentally, Force is the only driver to do it in a Funny Car, while Anderson is the only one in Pro Stock. The other five drivers were all competing in Top Fuel.

While it’s not technically part of the famed Western Swing, the series makes a stop on the way back east in Minnesota for the Lucas Oil NHRA Nationals in Brainerd.

The Western Swing is also an indicator that the regular season is drawing to a close. After those three Western races and the far North stopover on the way back, just the Chevrolet Performance U.S. Nationals in Indianapolis remains before the Countdown kicks off.

Just five more races total to get into the best position for a championship run. To complicate things slightly, the U.S. Nationals is an event that gets circled on a lot of calendars, meaning more cars than usual will likely show up to compete in all the professional classes. But hey, no pressure there for teams hovering on the bubble, right?

On the subject of being on the bubble, how big can an oildown penalty be? For Scott Palmer, it’s been huge. Palmer has been docked 60 points so far this season for oildowns. Driver gets docked five points for the first occurrence, 10 for the second and 15 for each subsequent, so that means he’s been penalized five times altogether.

Of course Palmer is hardly alone. Crampton has lost 45 points to oildown penalties and Salinas 15. They are just a handful of the 15 drivers and teams who have been penalized. Still, at this stage of the game for Palmer, it’s the difference between being in the Countdown and out of it with the number of races left to fix the situation getting smaller every week.