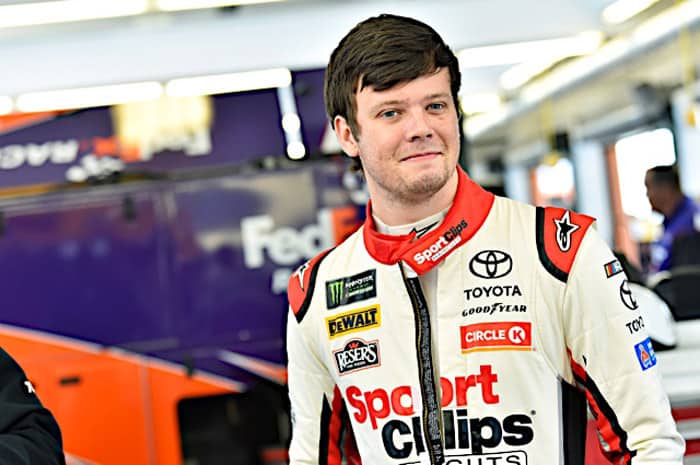 It took until the exact halfway point of the 2018 season, but Jones, who boasted multiple wins in the XFINITY and Camping World Truck series prior to his Daytona International Speedway triumph, is the maiden first-time winner of the year, doing so in his 57th career start.

Now, that doesn’t mean he’s the quickest driver to his first win in recent memory; Chris Buescher pulled into Victory Lane in the Cup Series in 2016 in his 27th series start. He isn’t even the latest first-time winner in a given series; again, most recently, Buescher was a debut victor 21 races in.

He is, however, the latest in a long string of inaugural winners at a superspeedway.

You’ve heard the story before: Daytona International Speedway and Talladega Superspeedway are the great equalizers, tracks where drivers who might have less of a shot to win a race end up at the front by race’s end. Hell, Justin Haley, running his second-ever XFINITY Series race last weekend at Daytona, nearly won in his second start. John King scored a Truck Series victory at Daytona in his eighth race (and only ran eight more races after that).

Here’s the thing, though. In the 2010s, Jones becomes the fifth driver to win their first Cup race at Daytona. And while he has plenty of company as a result, consider said company:

Together, these four combine for six wins in the Cup Series since 2010. Of those, all have come on restrictor plate tracks, with Stenhouse and Ragan adding second wins at Talladega.

That’s the question now to ask of Jones. He’s got that win under his belt; in theory, more are sure to come. But consider the other drivers who have emerged victorious first at Daytona this decade. Bayne and Almirola remain one-time winners in the series (though the latter has seemed close to an additional triumph this year since his move to Stewart-Haas Racing), while Stenhouse and Ragan only have wins at Talladega in addition to their Daytona victories to put them in the win column.

Can Jones break the streak? That’s the question now. As a Joe Gibbs Racing driver, one imagines more victories are on the horizon, especially considering his strong record in the lower NASCAR national series. But it isn’t like there aren’t drivers out there known for their restrictor plate racing prowess, racers who end up with superspeedway wins but goose eggs at other tracks.

But if nothing else, Jones could end up being the next Greg Biffle.

After all, Biffle’s first Cup win came at Daytona, too — and in the same race. Amid a mostly underwhelming rookie season in 2003, the Roush Fenway Racing competitor emerged victorious at the July Daytona race that year, which at that point was only his second top 10 all season.

Biffle, who like Jones had a formidable XFINITY and Truck series career prior to his Cup triumphs, was in no way a one-hit wonder. He eventually won 19 Cup races in a 510-race career that seems to have concluded at the end of 2016, and though he never won a Cup championship, he does have a six-win season to his credit. At the very least, no one would consider him a Cup bust.

The path laid in front of Erik Jones ends up having two routes. There’s someone like Bayne and Ragan, who have only shown race-winning strength at superspeedways. But then there’s Biffle, a 19-race winner who at one point was one of the series’ elite.

Any first-time winner is a big story in the Cup Series. Where Jones goes from here is now up to him.