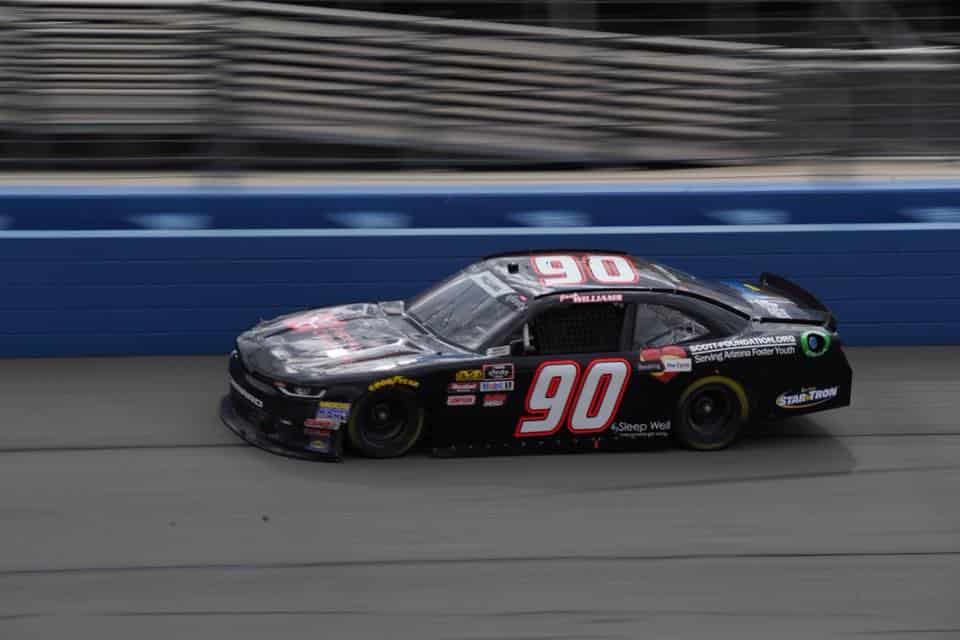 Fans, and even some broadcasters, might be unfamiliar with the name Josh Williams, but theyʻre missing an interesting story. He’s one of those drivers who is considered a racer’s racer, working on the mechanics of the car, driving the hauler to the track, and of course, hopping in the cockpit to race the thing — all while battling the financial system in NASCAR.

Williams, 24, is in his third season as a NASCAR XFINITY Series driver, and this year he’s running close to full-time, sharing the No. 90 DGM Racing Chevrolet with Brandon Brown and Andy Lally. He’s competed in more races this season, 14, than the previous two seasons combined, which totaled nine.

The Florida native has spent much of his career in the ARCA Series, grabbing a pair of victories in 2016 at Nashville Speedway and Madison International Speedway. Though Williams missed one event that year, he finished fourth in the championship standings before shifting his focus to the XFINITY Series, skipping the Camping World Truck Series almost entirely but for a lone event in 2014.

The only races Williams has not competed in this season were at Richmond Raceway and Dover International Speedway. He has a pair of 21st-place finishes (career best) at Las Vegas Motor Speedway and Pocono Raceway, which makes the driver happy to run for a small race team.

“I think we’ve done a great job,” Williams told Frontstretch. “We’re using a steel body, used tires, some times no pit crew at all. We have to borrow the pit crew from the [No.] 36, and they’ll have to run to our pit box, and I’ll have to pit either the second or third time by. We lose a lot of track position, but with the things we’ve had to fight and the circumstances of our financial situation, I think we’re doing way better than we really should be.”

While driving for DGM Racing, he brings crew chief John Holmes and crew member Adam Nelson along to work on the No. 90 machine. It’s a collective effort between the three members of the Josh Williams Motosports crew and a few more from DGM to get the ol’ Chevrolet tuned up for the race.

“It’s just one big family,” Williams said. “Everyone works together, everyone gets along, and we’re always trying to be better. We’re not settling with what we have, we want to be better each and every week. One of the things I like about it is we’re real racers.”

Williams admits he can do anything and everything mechanically on a race car. Growing up, he was used to calling his own shots from the driver’s seat. This season, Holmes is labeled as the crew chief, but the driver said Holmes leans on him a lot to make the right adjustments.

This whole situation shows how NASCAR’s financial system has impacted Williams and the No. 90 team. In many ways, that makes the mid-20 place finishes even that more impressive.

“There is no reason why if we didn’t have all the resources and the right amount of money that a team like us couldn’t run in the top 10 every week with two cars,” Williams said. “It’s all financial-based. We’ve been using scuffed tires, and if we had been using sticker tires and could afford better motors, pull-down time, wind tunnel time and stuff like that, it would make a huge difference. It all improves your performance.

“I feel like I have the potential as a driver to make it as far as I can go financially, whether it be [Monster Energy NASCAR] Cup [Series] or here in XFINITY. I’ve raced with the best of them my whole life, and I’ve beaten the best of them or have ran right there with a lot of the guys who are in the Cup Series, XFINITY Series and winning races. What you’ve done in the past doesn’t matter if you can’t be on the same level as them on the racetrack.”

This season, Williams has been working with StarTron and Sleep Well, a pair of companies that have hopped on board to help bring the No. 90 to the racetrack. Those are small companies, though Williams said other teams have reached out to try and take them from his team.

“We’re kind of on a trial basis with both companies right now,” he said. “You know how this business it – you get a sponsor and 15 people call them on Monday morning. They’ve already got those phone calls, and they’ve stayed with us this far. We really appreciate their loyalty to us, and hopefully, next year, we can do something bigger.”

The economic model in NASCAR has shifted over the past two decades. As opposed to the golden era, team owners are having to make decisions based on whether or not to put a driver in a car without funding. Money buys speed, meaning the more money a driver can bring to the table, the better chance they have of winning.

Dating back to ARCA,Williams has been impacted by the model. In 21 of 102 career starts in the series, Josh Williams Motorsports was the primary sponsor of his respective car, meaning he had no primary funding.

“It’s kind of hurt it pretty bad in my opinion,” Williams said of how the racing economic model has effected his career. “It’s unfortunate you have so many kids across the United States, and in the world, I would say that have the talent and ability to be in a Cup car or a Formula One car, IndyCar, whatever it may be in a top-tier series, but they can’t get there because their dad doesn’t know somebody who owns Coke, or their great grandfather didn’t have a trash company.

“There are so many people who run in the top 25 to 30 who could win races, but you’ll never know unless they get that chance. It’s frustrating for me. I can’t stand it at times, but you have to accept it. Being where I’m at, I’d rather be in the car running 21st than sitting at home watching the race on television.”

Williams said team owners such as Jack Roush and Maury Gallagher have approached him in the past, but everyone says the same thing, “you’ve got to find that money.”

Because the No. 90 team is up against the wall financially, finishing in the 20s is an accomplishment in itself.

As the season progresses, there will be a few events that Williams will be out of the No. 90 car, as Brown has scheduled races for DGM Racing. Meanwhile, at the road course races where Lally is driving the car, Williams is hoping to be sitting atop the pit box as the crew chief, something he’s never done before.