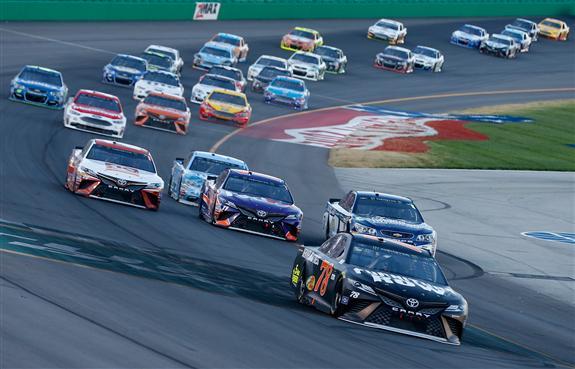 After a chaotic race at Daytona International Speedway, the Monster Energy NASCAR Cup Series heads to Kentucky Speedway for a primetime event on Saturday, July 14.  The Quaker State 400 will be the second consecutive night race for the series and the fifth of the 2018 season.

39 cars make up this weekend’s entry list, down from 41 at Daytona. That means everyone who qualifies will make the race.  Both the No. 96 of Gaunt Brothers Racing and the No. 92 owned by Ricky Benton are not attempting this event.

There are also some changes to the other cars on the list. Landon Cassill is back behind the wheel of the No. 00 car for StarCom Racing after driving the No. 99 for them at Daytona.  Cassill scored a 24th-place finish while Joey Gase, who drove the No. 00 at Daytona, ran 25th.

Replacing Cassill in the No. 99 will be XFINITY Series full-timer Garrett Smithley. Smithley is making his second start in the car after running at Michigan back in June.

Over at Roush Fenway Racing, Matt Kenseth is back in the No. 6 car after Trevor Bayne drove the car for the last three races.  Kenseth is slated for 10 more events this season, including this weekend at Kentucky.

Jesse Little, son of former Cup Series veteran Chad will be making his MENCS debut. Little will drive the No. 7 car for Premium Motorsports, driven to an 11th-place finish at Daytona by Jeffrey Earnhardt.  Little has recently driven in the Camping World Truck Series, producing four top-10 finishes in his five starts this season.  He also has two K&N Pro Series East victories to his resume.

B.J. McLeod is currently listed as the driver of the No. 51 for Rick Ware Racing this weekend after Ray Black Jr. scored a solid 16th-place finish at Daytona. McLeod has made four previous starts in the car, finishing no better than 33rd.

Finally, Timmy Hill will drive the No. 66 car for Motorsports Business Management this weekend.  Hill scored a seventh-place finish for the team in the NASCAR XFINITY Series at Daytona Friday night.