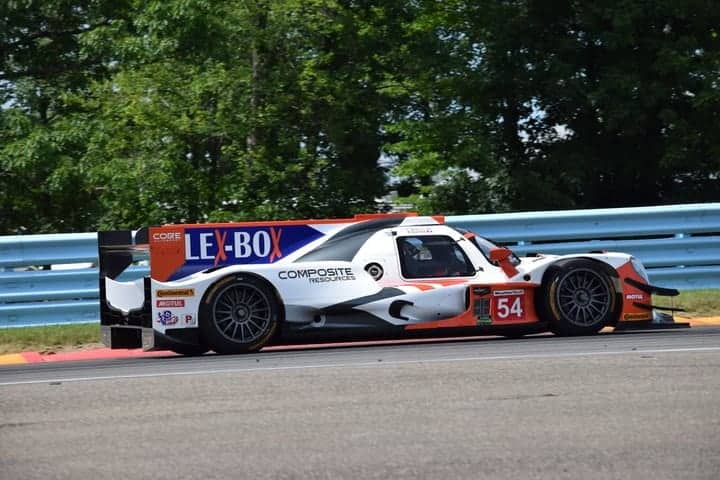 In the first session, Braun was once again fastest, this time with a lap at an average of 131.820 mph.  The lap was more than nine-tenths of a second faster than Acura Team Penske’s Dane Cameron in the No. 6.  Action Express Racing’s Filipe Albuquerque was third in the No. 5 Cadillac, followed by Mazda Team Joest’s Jonathan Bomarito.  Felipe Nasr was fifth quickest in the second Action Express Cadillac.

The session was stopped after 50 minutes due to a big crash in turn 1 for Performance Tech Motorsports’ Kyle Masson.  Masson walked away from the crash, but the team’s ORECA 07-Gibson was heavily damaged.  As a result, the team has withdrawn, dropping the number of Prototypes for the weekend to 12.

In GT Le Mans, it was Porsche GT Team leading the way.  The No. 912 Porsche of Earl Bamber was fastest with a lap at 118.764 mph, nearly a half-second faster than teammate Nick Tandy.  Corvette Racing’s Jan Magnussen was third quickest, followed by Oliver Gavin.  Ford Chip Ganassi Racing IMSA’s Dirk Müller was fifth.

In GT Daytona, only 11 cars are entered after the withdrawal of the SunEnergy1 No. 75 Mercedes.  The teams that did make the trip to Ontario are very close indeed.  Turner Motorsport’s Bill Auberlen was fastest with a lap at 115.194 mph.  The lap was eight-hundredths of a second faster than 3GT Racing’s Jack Hawksworth in the No. 15 Lexus.  Scuderia Corsa’s Jeff Segal was third fastest, followed by Kyle Marcelli in the second Lexus.  Riley Motorsports’ Jeroen Bleekemolen was fifth quickest.  All 11 cars in the class were separated by less than six-tenths of a second.

In the afternoon, everyone picked up the pace on the quick Ontario road course.  Despite that, Braun was still fastest with his aforementioned lap at over 132 mph.

Braun’s lap was a mere four-hundredths of a second faster than Cameron.  Helio Castroneves was third in the second Acura ARX-05.  Unfortunately for Castroneves, his day ended when he spun at Moss Corner and hit the tires.  Castroneves was ok, but the incident led to a lot of work for Acura Team Penske.

Mazda Team Joest’s Harry Tincknell was fourth quickest in the No. 55 Mazda.  Tequila Patron ESM’s Ryan Dalziel was fifth.  Due to a lack of engine spares after the team went through three engines at Watkins Glen last weekend, the team has been reduced to one car for CTMP.

GT Le Mans saw Porsche on top once again.  This time, it was the No. 911 of Tandy that was fastest with a lap at 119.053 mph.  This lap was four-tenths of a second faster than Corvette Racing’s Antonio Garcia.  Tommy Milner in the No. 4 Corvette was third, followed by Laurens Vanthoor in the No. 912 Porsche.  Müller was fifth in his Ford GT.

Meyer Shank Racing with Curb-Agajanian’s Àlvaro Parente was fastest in GT Daytona with a lap at 115.606 mph.  Parente’s lap was just under one-tenth of a second faster than Marcelli.  Wright Motorsports’ Wolf Henzler was third in the No. 16 Porsche, followed by Paul Miller Racing’s Bryan Sellers.  Magnus Racing’s Andy Lally was fifth quickest.

Qualifying for the Mobil 1 Sportscar Grand Prix is scheduled to begin Saturday at Noon.  It will be streamed live at both IMSA.com and FansChoice.tv.