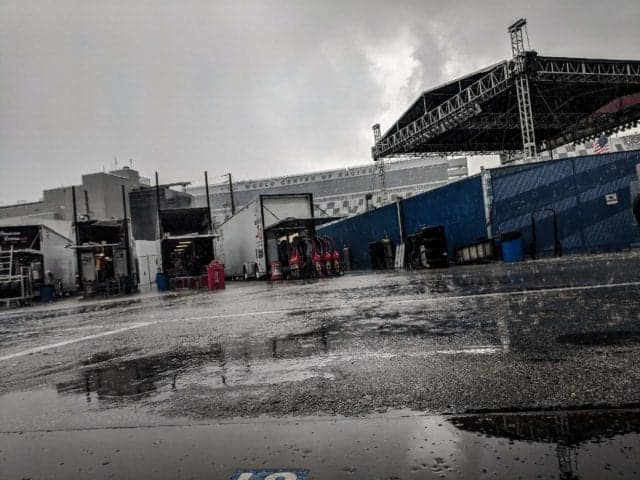 After a severe thunderstorm hit the Daytona International Speedway, NASCAR announced that they have canceled XFINITY Series qualifying for tonight’s race. A heavy shower hit the Daytona International Speedway around 2 p.m./ET. The Air Titans took to the track to begin drying, but as time began to click away, scheduled Cup qualifying time was inching closer and closer, resulting in NASCAR making the call.

With qualifying being canceled, the lineup for Friday night (July 6th) will be set per the NASCAR rule book, which means cars will be lined up based on owner points.

Ryan Preece will start on the pole for Joe Gibbs Racing for the second time of his career after he won the pole at Iowa last July, where he went on to earn his first career victory. Ryan Blaney will start the race from second.

Cole Custer will start tonight’s race in third spot, while Daniel Hemric and Elliott Sadler round out the top-five starting spots.

Ryan Reed, who led the first practice session, will start 15th. Chad Finchum, who led final practice, will start the race in 39th.

The Coca-Cola Firecracker 250 is scheduled to go green at 7:30 p.m./ET on NBCSN but that could change as the forecast has some rain. MENCS qualifying has already been moved to 5:30 p.m./ET from its original 4:10 p.m./ET start time.