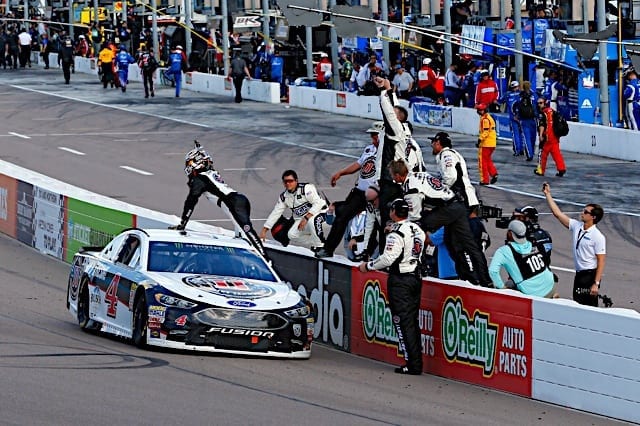 Who’s in the headline

The most dominant car of the season has been the No. 4 of Kevin Harvick. Harvick has five wins along with the All-Star Race this season. Kyle Busch has four race victories and is the current points leader by 75 over Harvick. Martin Truex Jr. and Clint Bowyer have two wins apiece while Joey Logano has a win. Austin Dillon is the lone Chevrolet to win a race, taking the victory in February’s Daytona 500.

Dillon won the season-opening Daytona 500 thanks to a late-race move of leader Aric Almirola that resulted in him hitting the wall one-third of a lap from victory. Harvick then established his dominance starting at Atlanta with three consecutive race wins. While Harvick wrecked in the California race, ending his bid for four straight, Truex dominated the event for his first win of the season. That was followed by Bowyer laying down a dominating performance at Martinsville, capturing the rain-delayed event for his first win in 190 races.

After Bowyer’s win, it was Busch’s turn to go on a tear and rip off three consecutive wins with victories at Texas, Bristol and Richmond. Logano stopped the Busch run with another victory at Talladega, his first since the encumbered victory at Richmond last year.

Harvick then took another shot at three in a row with wins at Dover and Kansas, but Busch stopped that run with his first victory in a points race at Charlotte. That triumph gave him a win at every active track on the Monster Energy NASCAR Cup Series schedule. To wrap up this portion of the season, Truex and Bowyer scored wins at Pocono and Michigan, making each of them multi-race winners and locked into the playoffs.

One of the biggest stories of the first portion of the season was the use of a high drag aero package with restrictor plates for the All-Star Race. The racing was exciting with cars staying close together and drivers putting their vehicles into places that they don’t normally try due to the slower speeds. NASCAR is discussing potentially using the package at several tracks this season, although the drivers are none too interested in it.

Why you should care

Parity is what the sanctioning body has pushed for continuously over the last decade or so, but this season has been a bit of a step away from it. 15 races into the season, there are only six unique winners, including two drivers who’ve won nine of the races. Chevrolet teams have struggled with the new Camaro, creating a large gap among manufacturers although they are beginning to look competitive with it over the last two races.

Circumstances will change between now and the end of Indianapolis in September, which means no one has any idea what the playoffs will hold. But right now, it feels like a three-man race for the title with all the Chevy teams shut out of serious contention.

What your friends are talking about

The biggest story of the season to date was word the France family was contemplating the sale of the sanctioning body. For fans who have screamed for some time that Brian France needs to go, there couldn’t be any better news. The thought that no France would be at the helm of the sport that the family built is foreign to NASCAR fans, but it would certainly be a shot in the arm for the sport. It will be interesting to see what kind of valuation Goldman Sachs puts on NASCAR as a whole in anticipation of the sale process.

After being forced to step away from the sport at the end of last season, 46-year-old Matt Kenseth has been brought back to try and help evaluate Roush Fenway Racing. A myriad of Kenseth and Roush fans beat the drum he was going to come back and immediately be a winner in RFR equipment. It quickly became apparent, though that the cars are more of a challenge than even the 2003 series champion can overcome. The end result is Kenseth running equal to Ricky Stenhouse Jr., putting the No. 6 in the top 15 but no higher while the team gets its act together behind the scenes.

While that is better than Trevor Bayne was doing in the No. 6, it isn’t what the fans anticipated for Kenseth. However, the “success” the veteran has experienced has boosted RFR’s confidence as he has been given an additional 10 races for 2018. Bayne has to see the writing on the wall; he’s not long for the RFR family. The team has a long way to go, but it appears as though they feel Kenseth is leading them in the right direction.

At-track attendance and TV ratings have been a point of interest over the past few seasons and it was front and center after the Camping World Truck Series race at Iowa. The Twitterverse lit up with discussion about the lack of a Cup race at the 7/8-mile track and the reasoning behind the empty grandstands at the Truck event. Iowa supporters feel that the area would support a Cup race and sell out the track. In fact, some longtime tickets holders pointed out that they have held onto them in anticipation of a Cup date and the belief that NASCAR’s purchase of the track gave them false hope.

In reality, the lack of support for the Truck race gives the sanctioning body zero reason to add a Cup date. Kentucky Speedway sold out Truck and XFINITY races for years before it received its MENCS addition to the schedule. If the Iowa fans don’t give NASCAR a reason to think they will show up by packing the track for whatever racing series is brought there, they can kiss a Cup date goodbye.

Bayne has struggled to capture any real success since climbing into the RFR No. 6 ride. Over the past four seasons, he has four top-five runs. Two of them have come at plate tracks, one at Bristol and one at Michigan. For his career, that makes five total top-five runs (including his 2011 Daytona 500 victory). Seeing Kenseth awarded 10 more races has to be the writing on the wall for the end of his time at RFR. There is always the possibility that Bayne could catch on with a backmarker team, but the truth is that his career in the Cup Series is very likely over.

Ryan Newman was in the playoffs last season thanks to a strategic victory at Phoenix early in the year. This season has been a struggle, to say the least. Newman has three top-10 finishes, two of which are on plate tracks. His average result is over six places worse than his average start, and he is lowest in the point standings among drivers for the big teams. The struggles of Chevy are well known but they have hit Newman especially hard.

Ryan Blaney may be behind his teammates in the point standings, but he’s shown quite a bit of speed and potential in 2018. He’s also sitting ninth in points and has led 444 laps, more than any other complete season before this year. Blaney has been knocking on the door several times this season and it would surprise no one to see him in Victory Lane before the end of the year.

Almirola is sitting 11th in points. That is five positions better than his best career point finish of 16th in 2014. While Almirola is fourth among the teams at Stewart-Haas Racing, he’s shown moments all season that give him hope. His biggest challenge has been making the adjustments to keep up with the racetrack as they change every week.

The No. 10 team has never finished inside the top 20 in the point standings, let alone make the postseason. However, it would not be a surprise to see them in the single digits by the end of the year and make an extended playoff run.

When the checkered flag flew

Dillon, Harvick, Truex, Bowyer, Kyle Busch and Logano are the six race winners in 15 races of 2018. Assuming there are 16 or fewer unique winners in the regular season, they will be locked into the playoffs based on winning a race. Harvick, Busch, Truex and Bowyer are locked into the playoffs thanks to two victories, assuming they attempt the remaining races in the regular season.

Here are the drivers who would qualify for the playoffs and their associated playoff points (race winners are bolded):

The season has been a bit of a throwback to the old days of dominance by race teams. Harvick and Busch have been the class of the field for the first 42 percent of the season but the racing has been intense throughout the field all year long. There haven’t been any truly outstanding races but there has been plenty for race fans to enjoy every weekend. As a result, we’ll give the first part of the year four cold Lagers from New South Brewing in Myrtle Beach, S.C.

Where do you point your DVR for next week

The series heads to the wine country of California for the first road course race of the season at Sonoma Raceway. The race coverage begins at 3 p.m. ET on FOX Sports 1 and can also be streamed on the Fox Sports Go app. This MENCS race serves as the season finale for FOX coverage.

If you want to listen to the action, it will be carried on your local MRN affiliate, www.motorracingnetwork.com and SiriusXM NASCAR Channel 90.