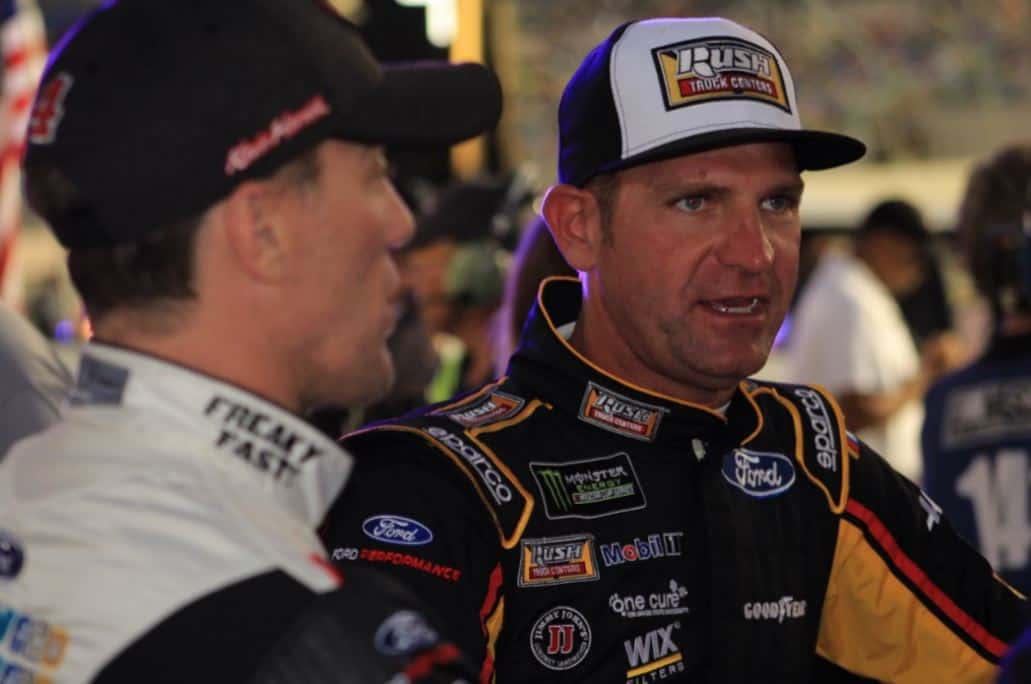 In 2014, Kevin Harvick left his longtime home at Richard Childress Racing for an opportunity to drive for his old pal, Tony Stewart.  Three years later, another familiar face showed up at Stewart-Haas Racing in Clint Bowyer.

Harvick and Bowyer had been teammates before.  Back in 2006, Bowyer joined RCR’s Cup Series lineup as a rookie, racing alongside Harvick and veteran Jeff Burton.  He remained on Childress’ team for six seasons before departing for Michael Waltrip Racing in 2012.

When Bowyer left RCR, it seemed unlikely that he and Harvick would ever end up on the same team again.  Harvick had become the team’s biggest star during the 2000s, and a surprisingly strong campaign in 2010 snuffed out rumors he was looking to leave the team.  Bowyer, meanwhile, was supposed to be the driver who would take MWR to the next level and emerge as a more consistent championship contender.

Yet neither driver’s plans worked out the way they expected.  Harvick’s calculated gamble to switch teams, plus the implosion of MWR, led to the reunification of both drivers at their current organization.

Now, in 2018, Harvick and Bowyer are facing a challenge they have never dealt with before.  This duo have never been top contenders for a Cup Series championship while teammates.  Unlike SHR’s run of success this year, Harvick’s and Bowyer’s time at RCR was a struggle to simply get all of its cars up to speed at the same time.

The 2006 season, for instance, was a strong one for Harvick.  After a few down years, the No. 29 team reeled off five victories, a personal best he would not match until 2014.  A few bad results in the Chase wrecked Harvick’s championship hopes, but he finished fourth in the final standings, another career-best mark at the time.

After that, Harvick earned a win in the 2007 Daytona 500 in thrilling fashion. But then, he went the next three years’ worth of races without another points-paying victory.  The 2009 season was particularly rough; Harvick had to fight his way into the top 20 in points in the last race of the year.

But in 2010, the combination of Harvick and crew chief Gil Martin finally clicked.  The No. 29 team scored three wins and fought Jimmie Johnson and Denny Hamlin in a championship battle that went all the way to the season finale.  Harvick never did win a title with RCR, but he never went through another severe dip in performance for the rest of the time he drove the No. 29 car.

Bowyer, meanwhile, did not have championship-caliber results in 2006, 2010 or 2011.  Other rookies overshadowed the Kansas native during his 2006 campaign.  At the beginning of the season, Bowyer was almost an afterthought in the wake of all the hype surrounding Martin Truex Jr.  Truex’s pair of XFINITY Series championships and his friendship with Dale Earnhardt Jr. generated enough hype to push Bowyer out of the spotlight.  While he ultimately outperformed Truex that year, a third rookie named Hamlin outperformed both of them and stole the headlines once the season got underway.

The 2007 season was a different story.  While Harvick and Bowyer put up similar numbers overall, more of Bowyer’s success came during the Chase, including his first career win.  On the strength of eight top-12 finishes in 10 races, he wound up third in the final standings.  It remains debatable if anyone other than Johnson and Jeff Gordon were really championship contenders in 2007. However, Bowyer had improved considerably from 2006 and outscored his RCR teammates during the postseason.

Unfortunately for Bowyer, that rate of improvement did not continue, and he only showed up in the Chase two more times with RCR.  He finished fifth in points in 2008, one spot behind Harvick, after both drivers had to fight hard just to make the postseason.  In 2010, Bowyer won the first race of the Chase again, but NASCAR hit the No. 33 team with a huge points penalty several days later.  While Harvick stayed in the championship hunt until the final checkered flag, the penalty knocked Bowyer out of contention almost immediately.  And despite Harvick’s strong showing in 2011, Bowyer was unable to reach the Chase.

For both drivers, year-to-year consistency was the missing ingredient at RCR.  As the organization fluctuated between three and four cars in the late 2000s and early 2010s, it was impossible to know which of its teams would perform well and which would struggle.  The benchmark for Harvick was always higher at that time, with the No. 29 team expected to contend for championships. The goal for Bowyer, by comparison was usually to make the Chase.  But both drivers faced a lot of uncertainty not knowing if their teams and RCR overall could meet its goals each season.

Things are very different for Harvick and Bowyer in 2018.  Stewart-Haas Racing’s Fords have been fast every week on every type of track.  Harvick is one of the championship favorites with five wins through 15 races.  But it was Bowyer who defeated Harvick in a duel for the lead at Michigan International Speedway Sunday.  In doing so, Bowyer became only the fourth driver this season to record multiple wins, joining Harvick, Kyle Busch and Martin Truex Jr.

Both drivers should be looking to the postseason now.  While Harvick has obviously been a stronger weekly contender than Bowyer, both the Nos. 4 and 14 teams have proven their ability to win races in 2018. Their drivers could be on track for career years within the same season.

For two racers who have been teammates at two different organizations, there is no doubt that Harvick and Bowyer know each other well.  But they do not know how they will approach a championship battle against each other, because it’s never happened before.

“It’s just your friend,” Bowyer said after besting Harvick’s No. 4 car. “You know what I mean?  That’s the guy when I came into this sport at RCR, went to the first test, he’s the guy that was there.  I had no clue what the hell I was doing.  He helped me get my feet underneath of me.  I think he knew right off the bat that I was very green.  Took me under his wing and helped me out.