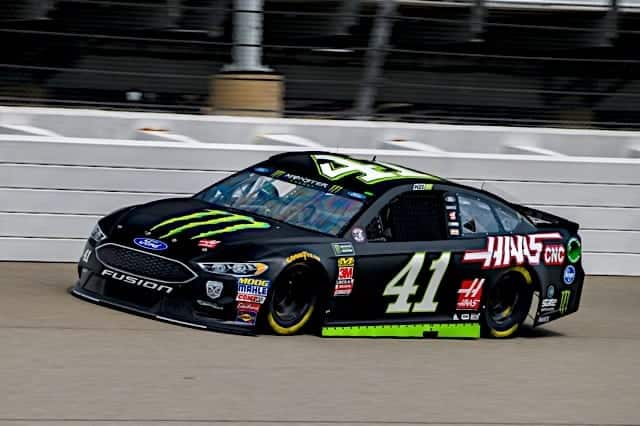 Kurt Busch hasn’t visited Victory Lane since the 2017 Daytona 500, but he will bring the field to the green flag for Sunday’s (June 10) FireKeepers Casino 400 at Michigan International Speedway.

In the final round of qualifying, Busch rocketed to the top of the scoring pylon with a lap of 203.361 mph, .034 seconds ahead of second. The pole run is the No. 41 teams second of the season, also pacing the field at Texas Motor Speedway in early April.

“It’s awesome to get the pole today, I wanted it bad,” Busch said of his performance. “We went for it, made the right air pressure adjustment and all that adds to the aero department that we built the car from at Stewart-Haas Racing, and then with the engines… I love the fact that the track had the grip level it did today. I just went for it today.”

Hometown driver Brad Keselowski had the second quickest time in qualifying (203.166 mph), and moved up the leaderboard throughout the three rounds. It’s his best qualifying effort in 18 starts at his home track.

“I thought after the run before we had something for the pole,” Logano said of his fifth-place effort. “I had a really good [Turns] 1 and 2 and kind of blew [Turns] 3 and 4. We made another round for it in Round 3, got in the middle 1 and 2, lost the nose and went up the racetrack. It’s fifth, and the good thing is we’re mad about fifth.”

Aric Almirola, Ricky Stenhouse Jr., Erik Jones, Ryan Blaney and Denny Hamlin fill out the rest of the top 10. Ryan Newman was the quickest Chevrolet in 11th, five-tenths off the quick time.

Kyle Larson comes into Michigan winning three straight races at the track, though on Sunday his work will be cut out for him, coming from 26th, after failing to make it out of the opening round.

“Our car has just been pretty far off all day,” Larson said of his effort. “Just really tight, and I don’t feel like I can turn the wheel very fall either. We’ve got some smart people in our race trailer and on our race team that will get it worked out and we’ll get some laps tomorrow and make it better.”

The series will have a pair of practice sessions on Saturday with the first coming at 9 a.m. ET. Final practice for Sunday’s race will be held at 12 p.m. ET.