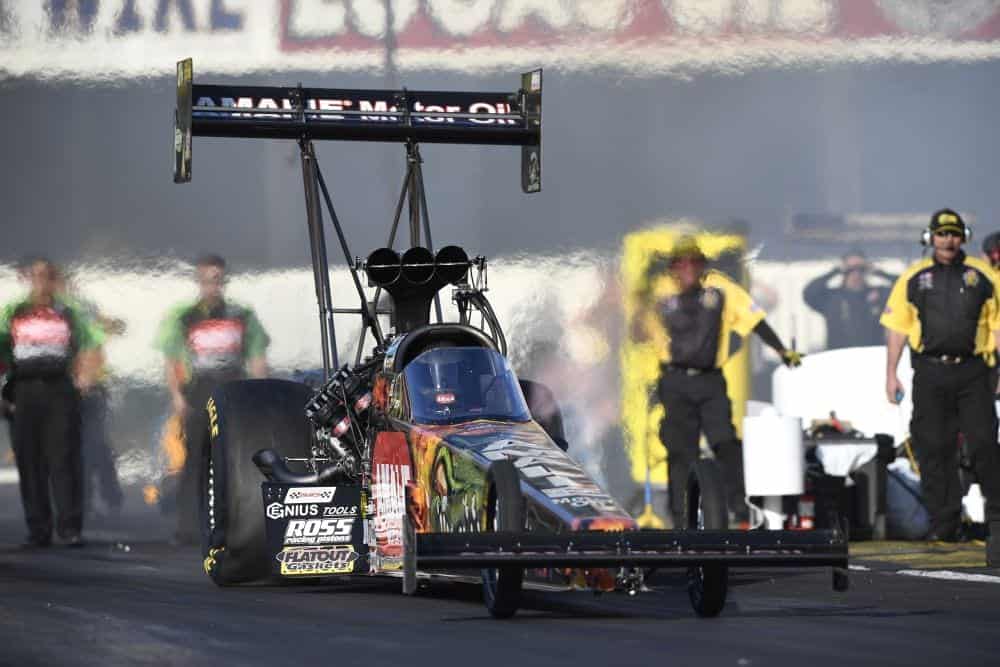 This week the NHRA Mello Yello Drag Racing Series returns to some new old territory, visiting Virginia Motorsports Park near Richmond for the first time since 2009 for a national event. That makes this trip an interesting one, as the more experienced drivers on the circuit have been to the track before, while all the more recent arrivals will make their first visit to the facility.

The great equalizer here might be time. The track is under new ownership after Tommy Franklin and his family purchased the facility last fall. Franklin is familiar to fans of PDRA as a co-owner of that series as well as the reigning Pro Nitrous champion.

“Tommy Franklin is definitely a patriot to our sport,” said Top Fuel driver Antron Brown. “He has a passion for drag racing. What he’s doing and has already done for that race track is incredible and they’re going to put on a great show. He has all of my support. We’re really looking forward to getting down there and having a great time.”

To prepare for hosting a national event at the track, the surface has been refurbished and has a new concrete surface. That means that the advantage of those who raced at VMP nine years ago is pretty small.

“I think (Richmond) is going to go well. We’ll have an even playing field for everyone, not having good track data there,” said Top Fuel’s Leah Pritchett.

The return to Virginia is a welcome change to the schedule for most, and while it’s unfortunate for the fans in the New Jersey region, it’s a huge gain for those in the Richmond, Baltimore, and Washington, D.C. area. The enthusiastic fans are one of the biggest things most competitors remember from previous visits to VMP.

Here are the thoughts of some of the stars of the NHRA Mello Yello Drag Racing Series heading to Virginia Motorsports Park this weekend.

“I am just looking forward to getting back to Richmond. I only have raced there once, and they have gone through a lot of changes since then.” Shawn Langdon

“I am ready to get to Richmond. They have a new surface and fans that are excited for us to get there. My Mac Tools team is ready, and we are looking for a win this weekend.” Doug Kalitta

“I’m glad we’re back racing in Virginia,” McMillen said. “I’ve raced here a lot over the years in my Alcohol Funny Car. One of my first Top Fuel NHRA races was here in Richmond. The fans are great, the track is great and we’re looking for a great finish in Richmond.” Terry McMillen

“I’m looking forward to getting back to Richmond. I remember racing at Richmond when I first started my career off in Pro Stock Motorcyles, so it’s going to be pretty awesome to get back there. The main thing is, it will be a great family homecoming. Since we aren’t going to Englishtown, all of my family is coming down to Virginia – my grandma is really excited. My mom’s coming out, my dad and uncles want to be there, so it’s just going to be a lot of fun.” Antron Brown

“It’ll be nice to see some new faces this weekend and bring (the fans) the kind of racing they’ve never seen before. A lot has changed since the last time we were there as far as our series. We’re much quicker, much more powerful than ever before, and it’s been a long time since they’ve seen anything like that.

“You can appreciate someone buying a racetrack and doing the things that need to be done to give us a safe and competitive place to come back to. The track itself – all concrete – is going to be pretty nice and I’m really looking forward to it.” Tony Schumacher

“There are few tracks I haven’t won at, and Richmond is one of them. I never got to win there before, and I’ve won at pretty much every other track over all these years. To get to go back there and have that opportunity is fun.

“We always enjoy going to that area of the country and you can tell the owners that bought that place, what they’ve done in a short amount of time, it’s going to be fun. We’re going to see a whole bunch of fresh faces that we haven’t seen for almost a decade as far as fans. They’ve missed us being in that area. I’m so happy NHRA is going back.” Ron Capps

“Going into Richmond and then Bristol right after, both home tracks for me, is pretty cool. I’m excited to have two races in my backyard.” Matt Hagan, Christiansburg, VA, native.

“I’m looking forward to getting back to Richmond. It’s been a long time since we’ve been there. I’ve run really well there in the past. I was the No. 1 qualifier in 2007. It’s a nice, beautiful facility; a lot of avid race fans in that area, so I’m glad we’re going back and hope to put on a good show for the fans.” Tommy Johnson, Jr.