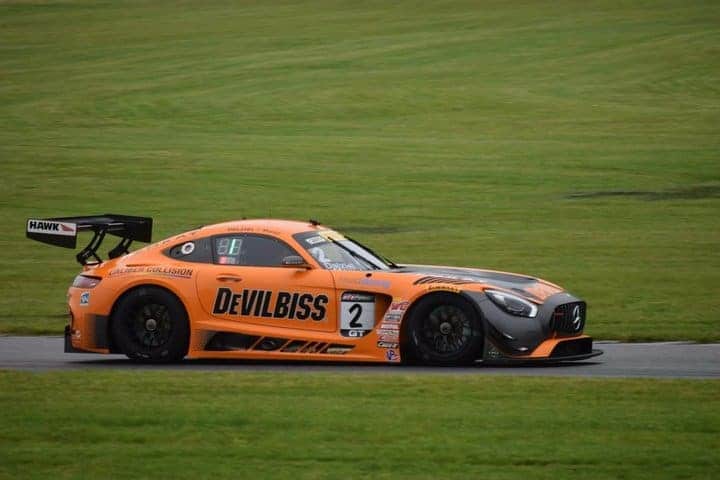 89 Pirelli World Challenge teams are entered in this weekend’s Grand Prix of Lime Rock Powered by M.  There will be four pairs of races during the weekend.  The GT SprintX races on Monday will be for the GT classes (Pro-Pro and Pro-Am, along with GT Cup).  GTS SprintX races are for GT4 equipment in Pro-Am and Am-Am classes.  Saturday sees two races for the TC class and two combined races for the TCA and TCR classes.

As compared to the last SprintX weekend at VIR in April, there are 12 fewer entries overall and five less in the GT SprintX races.  No shows include GMG Racing’s No. 41 Porsche, TruSpeed AutoSport’s No. 71 Audi and DXDT Racing’s No. 63 Mercedes.

Of those entered, there weren’t any major changes on the entry list until Thursday afternoon.  At that point, CRP Racing announced that Fabien Schiller will not be in the No. 2 Mercedes-AMG GT3 alongside Daniel Morad this weekend.  He will be replaced by Raffaele Marciello, a Mercedes factory racer.  Marciello comes to CRP Racing from the AKKA-ASP team in the Blancpain GT Series Sprint Cup, where he is currently fourth in points.

Favorites for the weekend include R. Ferri Motorsport’s Miguel Molina and Toni Vilander in the No. 61 Ferrari and PFAFF Motorsports’ Porsche for Scott Hargrove and Wolf Henzler.  In the Pro-Am class, Rodrigo Baptista and Maxime Soulet claimed an overall win at VIR.  They should the team to beat.

The GTS SprintX races will be contested by 35 cars, 20 in the Pro-Am class and 15 in the Am class.  While that number is down from the 38 at VIR, the pit lane at Lime Rock is very short.  35 teams will fill all the available space.

Winward Racing/HTP Motorsport has entered their Techemet-sponsored Mercedes for the father and son team of Bryce and Russell Ward.  The Wards usually compete full-time in the IMSA Continental Tire SportsCar Championship’s Grand Sport class, but in separate cars.

PF Racing was originally planning to field Jade Buford and Scott Maxwell in the No. 55 Ford Mustang GT4.  On Thursday, Maxwell announced that his father George had passed away.

With great sadness I must share the news of the passing of my dad George Maxwell. He was my inspiration to pursue and succeed in motorsports and life but above all he was a great husband, father and friend to so many. The photo below is how I like to remember him. Love you Dad. pic.twitter.com/Lo9pAn0wIj

As a result, Maxwell will sit out the weekend to tend to his family.  Patrick Gallagher, who has previously competed at Lime Rock in the TC class, will drive in Maxwell’s place.

Mark Klenin will race this weekend after crashing his McLaren hard at Canadian Tire Motorsports Park.  However, he will not be driving his own car.  He will be driving an Audi R8 LMS GT4 in a likely rental situation while his McLaren 570S GT4 is being repaired.

The TCR class has 14 entries, led by points leader Ryan Eversley in the Honda Civic Type-R TCR.  He’s done battle with the two Bryan Herta Autosport Hyundai i30 N TCRs driven by Michael Lewis and Mark Wilkins all year and the duel is likely to continue in the Litchfield Hills.  They’ll be joined by the TCA class, which has 11 entries.  For the most part, TCA is comprised of Mazda Global MX-5 Cup cars and Subaru BRZ tS chassis.

In a last-minute addition, M1 GT Racing has added an Audi RS3 LMS Club Sport for David Ostella.  Ostella is likely best known for racing in Indy Lights for two years.  Most recently, he drove for then-PR1/Mathiasen Motorsports in a one-off last year at Canadian Tire Motorsports Park.  Unfortunately, Ostella’s race ended on his head.

Finally, 16 TC teams are entered.  Points leader Vesko Kozarov will take on a field of BMW M235iRs and Nissan 370Zs.  Keep an eye out for Johan Schwartz to mix it up in his Rooster Hall Racing BMW in West Virginia Mountaineer colors.

Frontstretch will be at Lime Rock Park all weekend to cover the action.  Due to long-standing local laws, there will be no racing on Sunday.  However, we will be on-site Friday, Saturday and Monday to bring you the action.