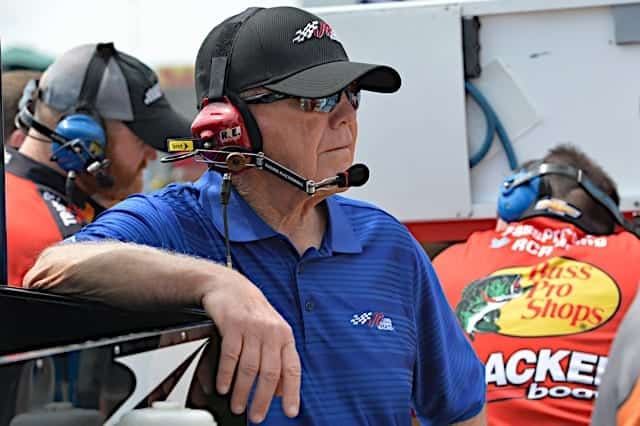 Legendary car owner Joe Gibbs loves what he does. He thrives off the family environment he created at Joe Gibbs Racing, and for this 77-year-old, there is no end in sight. JGR has three MENCS wins already this season with Kyle Busch, contending for the title once again although the team’s other three drivers have yet to enter Victory Lane.

We spoke with Gibbs, discussing the organization’s start to the season, Busch’s growth, his team’s relationship with different sponsors, the charter system with the RTA, a potential NASCAR sale, his future as a car owner and more.

Joseph Wolkin, Frontstretch: How would you assess the team’s start to the season?

Joe Gibbs: We’ve been slow. We did the same thing last year. It’s frustrating for us because we work so hard. We win with Kyle, so we’ve won some races, but we haven’t hit our stride with our other three cars. I’d say we’re behind some.

Wolkin: Why do you think you guys are behind?

Gibbs: It can be like any pro sport. It can be little things because you’re really close. For us, it’s motor, aero, everything. We need to improve all across the board.

Wolkin: Did you anticipate the Fords, especially at Stewart-Haas Racing, would get off to such a hot start?

Gibbs: You always in pro sports — particularly in NASCAR — have someone who gets hot and takes off. You’re never quite sure who it’s going to be. You hope it’s yourselves. The last few years has been Toyota and us. You’re always on your toes. I’ve always said that in pro sports, I don’t know how anybody can be cocky because I’m always worried what’s next.

Wolkin: Coming from the football scene, what differences do you see in terms of confidence when you see a driver get on a hot streak?

Gibbs: In all sports, confidence comes from winning and is something that is hard to capture. Once you get that, it does give you confidence. It’s kind of hard to put into place. I’d say that most teams are like people. They lack self-confidence, but they can be over-confident. You just have to get that sweet spot. That’s the key in all pro sports.

Wolkin: Kyle has grown not only on the racetrack, but away from it as well. What do you think was the moment for him he started maturing?

Gibbs: I think winning a championship was a big deal for him. When he got very bad, he bounced back from that to win all of those races and the championship. That was a big change in his life. Then, he got married to Sam and then having a child, Brexton, all of those things have made him grow up. He’s still going to get after it, but I think these things mature you and he’s growing.

Wolkin: What’s the biggest way you’ve seen him mature over the years?

Gibbs: It’s the way he handles bad things. We’re all good on good things. In this sport, about 80 percent of the time, even with Kyle, you’re going to have bad stuff. I think he does a better job at handling that.

Wolkin: Your team is one of the industry leaders in business-to-business deals. What does it mean to you to have such an impact during sponsor events like today when you’re interacting with kids?

Gibbs: The difference in this sport is you need to have a great sponsor in order to participate. Football, basketball, baseball, you’re playing and you don’t need sponsors. Over here, the sponsor plays such an important role and they are actually in race day. Three and a half hours they’re on the car and they’re a part of it. Then, you have a relationship with all of these companies. Dewalt is a good example. They have a huge commitment to give back to the community.

Today, the focus is on kids and they have Discovery Education. They have a great program with STEM. They really contribute back into the community. It’s a thrill for us to be a part of a company with a 175-year history. They have over 50,000 employees. They have a huge commitment to the community and to people. I’m proud to be part of it.

Proud to be partnered with these folks. #TEAMDEWALT #DEWALT pic.twitter.com/sTueUBGh6H

Wolkin: What differences are you seeing on the ownership side as the Race Team Alliance continues to grow?

Gibbs: What we do now is speak with one voice. We have meetings. We don’t all agree on something, but we go forward to NASCAR or out into the racing world with one voice. That’s very important because it used to be fragmented. The fact that we have charters helps us from a business standpoint. There’s a lot of positives about the RTA.

Wolkin: How has the charter system helped your team?

Gibbs: Hopefully, what’s going to happen in the future is you’re going to build financial security if you have charters. Obviously, the NFL is the best example of that. We’re still in our fledgling young stage, and it hasn’t really taken place yet. But hopefully, that will come in the future.

Wolkin: Do you find it feasible to have a profitable Cup team? How difficult is it for you to make a profit?

Gibbs: From a business standpoint, it’s a lot of hard work. It’s unlike anything else I’ve been in. You have to go fast first to get good sponsors. It’s the chicken and the egg. We got the wrong deal going (laughs). Our deal is we really make a strong commitment to racing. We want to race and be up front.

When you find sponsors like Dewalt, Stanley and stuff, they want to be up front. If that’s the place to be, then you have a good chance at attracting sponsors. It’s go fast first, and then maybe, you have a chance to attract sponsors.

Wolkin: Erik is a good example of that, with the No. 20 team missing sponsorship in a few races last year with Matt Kenseth and now it’s filled up. How important is it to bring new companies into the sport?

Gibbs: It’s so important. This year alone, we’ve added Rheem, Menards came over to us and we’re still adding companies. It’s so important for us because we have to have great sponsors to race fast. It’s that simple.

Wolkin: The rumors have been swirling about a potential sale of NASCAR. What changes would you like to see if that sale does happen? Is there an ideal direction you’d like to see NASCAR go in?

Gibbs: What I found out about pro sports is they’re constantly changing and trying to evolve. Football was that way. You got caps, hard caps and everything else going on there with the draft and changes to the draft. Over here, it’s the same thing. You’re constantly trying to evolve. You want better racing. You want a better business model. I found that pro sports change roughly 30 percent a year. You better be in front of that and working on that.

Particularly in pro sports, you have to understand that’s just going to happen. I always look at it that when you have changes, if you handle it better than anybody else, you’re going to get a jump.

Wolkin: Do you feel like NASCAR has handled that well over the years?

Gibbs: Last year, for 22 weekends, we were number one or two on the weekend in sports [ratings]. It’s a huge platform. We have a lot of content. It’s the perfect place for social and digital media. Today, most young people are taking things in on their devices, so we gotta be working in those areas and I think we are.

Wolkin: Your development program is expanding and performing at exceptional levels this year in the XFINITY Series and to an extent in the Truck Series with Kyle Busch Motorsports. How do you see your younger drivers eventually growing to become Cup drivers?

Gibbs: What happens in pro sports is the farther you go up the ladder, the harder it is. Guys just get weeded out. We’re looking for that young talent that continues to grow and continues to be successful. We have Christopher Bell right now, running up front. But it is very tough and even the step to Cup — I don’t care what you’ve done in XFINITY — is a big step. It weeds out some people. That’s what’s hard. Who is that person, who is going to be the next superstar?

Wolkin: How difficult is it for you guys to determine who can make it and who can’t with only five cars under the Toyota umbrella and little room to grow that number in Cup?

Gibbs: It is hard, and we’ve got Ryan Preece running races this year. We have Kyle Benjamin, Christopher in the car and Brandon Jones. We have three cars in XFINITY, and that’s our testing ground. Get them as many races as you can. Then, you’re going to have to make a decision. That’s a tough decision.

Wolkin: You’ve been a team owner since 1992 and you’re one of the most successful in NASCAR history. How much longer do you see yourself being an owner?

Gibbs: Well, I have my son with me, Coy and JD, but JD is sick. I got my family and my grandkids coming. I have a 15-year-old who is racing right now, Ty. For me, it’s family. I can’t see myself doing something else. I’ll probably go feet first out the front door.