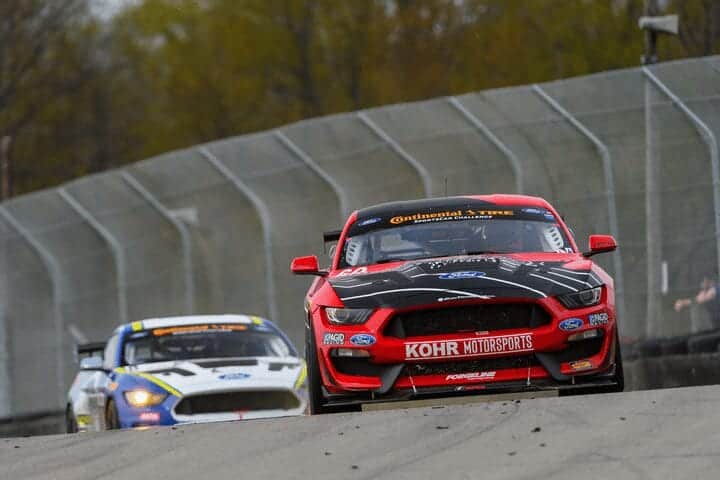 KohR Motorsports’ Kyle Marcelli ran down Multimatic Motorsports’ Patrick Gallagher from 12 seconds back to take the lead.  From there, Marcelli held on despite a mechanical issue to win the Mid-Ohio 120 on Saturday (May 5).  It is Marcelli and teammate Nate Stacy’s second consecutive IMSA Continental Tire SportsCar Challenge overall victory.

“It was one of those never give up races,” Marcelli said after the race.  “I just kept telling myself that anything can happen, to keep pushing, and our Ford Mustang GT4 was just really solid today. Really consistent. The tires held up great, the car just didn’t go off on me.”

“I knew if I just didn’t make a mistake, that we had the pace to do it. Finally, with just a few minutes to go it looked like I could make the pass and I knew when I finally caught him, I had to make it right away. We went door-to-door in turn 2 and it was just really good racing.”

In regards to the mechanical issue, Stacy explained to IMSA Radio’s Shea Adam that Marcelli radioed on the final lap that “something broke in the left front [corner].”  That allowed Gallagher to catch back up, but he could not get back past.

The race had only one full course caution.  It came very early in the race when BGB Motorsports’ James Cox stopped in the Carousel.  However, likely the most notable incident during the race occurred on lap 10 when Chase Briscoe attempted an ultra-aggressive move on Compass Racing’s Paul Holton at the Keyhole.  Briscoe charged from Holton from quite a ways behind.  The grass was clipped, contact was made and Holton spun.  The hit broke a suspension part on Holton’s McLaren and damaged Briscoe’s Mustang.  Ultimately, both cars ended up behind the wall.

In TCR, Compass Racing’s Audis dominated the race.  Britt Casey Jr. led from the pole until the sole full course caution.  A pit stop allowed Rodrigo Sales to take over.  Aside from a short period of time during a round of stops, Sales and teammate Kuno Wittmer led the vast majority of the remainder of the event.

However, fuel mileage came into play in the closing laps for all three classes.  Wittmer was forced to conserve fuel in order to get his Audi to the finish.  With seven laps to go, Wittmer had a healthy 17.241 second lead over Tom Long in the No. 77.  Long reeled in Wittmer at the rate of multiple seconds a lap and caught him on the last lap.

With only a few turns to go, Long was able to make the move to take the lead in Thunder Valley.  From there, Long pulled away to take his and Casey’s second win of the year.

Or, so they thought.  Post-race, IMSA assessed a 30-second penalty to the No. 77 for passing under a local yellow.  A couple of laps earlier, the Automatic Racing No. 99 Aston Martin of Al Carter pulled off exiting turn 9, having run out of fuel.  Rather than completely neutralize the race, the area was put under a local waved yellow.  Turn 9 is just where Long made his move.

As a result of the penalty, Sales and Wittmer claimed their second win of the year.  The official margin of victory was 28.560 seconds over Long and Casey due to the penalty.  The No. 75 of Roy Block and Pierre Kleinubing was third in class, a lap down to the winners.  JDC-Miller MotorSports’ Michael Johnson and Stephen Simpson were credited with fourth despite running out of fuel late.

In Street Tuner, BimmerWorld Racing’s Nick Galante led early from pole with the MINI fleet giving chase.  During the one yellow flag, Galante made a pit stop, which allowed Nate Norenberg to take over the lead.

After the final round of stops, it was the sister No. 73 MINI of Mat Pombo that took control.  Mat’s brother Mark was close in tow.  Late in the race, the brothers dueled for the class victory, but Mat was able to hold off Mark to take his and teammate Mike LaMarra‘s first win of the year.

Mark Pombo and debutante Colin Mullan ended up 4.3 seconds back in second. Galante and Devin Jones inherited third after Derek Jones pulled the No. 37 MINI off-course in the closing laps due to a mechanical issue.