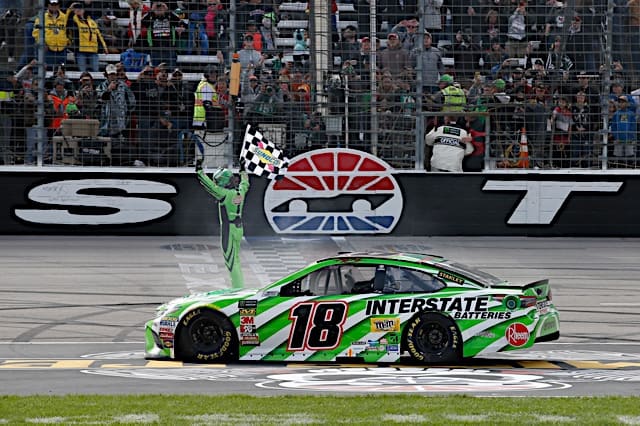 Can Kyle Busch make it four in a row?

Kyle Busch will be going for his fourth straight victory this weekend in the Monster Energy NASCAR Cup Series, a lofty achievement that very few even have the honor to race for. But he’ll be facing an uphill battle to do so this weekend.

Toyota absolutely dominated the 2016 Daytona 500, with Denny Hamlin winning and the Japanese automaker holding the top five essentially hostage the vast majority of the race. But ever since, Toyota has not been able to return to Victory Lane in any restrictor plate race.

Instead of their dominance being a harbinger to come, they’ve noticably fallen behind from Ford. Ford has won seven of the past eight plate races, with only the Chevrolet of Austin Dillon in this year’s Daytona 500 standing in the way of a perfect record. It also doesn’t hurt that Ford has arguably the four best restrictor plate drivers in NASCAR with Brad Keselowski, Kevin Harvick, Ricky Stenhouse Jr. and Joey Logano all racing for the blue oval.

What’s even more strange is that Busch, himself, isn’t that great a restrictor plate driver. In 2008, Busch was on one of the best hot streaks racing has ever seen, effortlessly winning race-after-race and pole-after-pole in all three NASCAR national series. In that run, Busch won a Cup race at Talladega —  featuring the first of several great saves — and another one at Daytona. Ever since, he’s had great finishes, but hasn’t won at either track. He finished third in this race last year, but that was also his only finish better than 20th in the past six restrictor plate races.

Of course, there’s the counter point that he’s Kyle Busch and that he’s really, really good. Which is a pretty decent counterargument to make.

Will Talladega yield another surprise winner?

Talladega is the racetrack with more first time winners than any other on the Cup Series schedule. Ever since unknown driver Richard Brickhouse took home the checkered flag in the very first race, the Alabama superspeedway has had some unusual faces roll into Victory Lane over the years.

Among the 18 drivers that are on the entry list this weekend that have not won a Cup race before, one driver that I’ve got my eye on that could potentially nab a surpise victory is Matt DiBenedetto. The 26-year-old Californian was running strong in the Daytona 500 earlier this year before a late-race accident knocked him down to 27th by the finish. DiBenedetto comes into Talladega with a lot of momentum, with two 16th-place finishes in the past three races. That doesn’t sound like much, but for DiBenedetto’s small Go FAS Racing team, those are practically wins. He also finished ninth in last year’s Daytona 500.

Another interesting story to follow this weekend is Brendan Gaughan. The former full-time Richard Childress Racing XFINITY Series driver has largely retired from racing, but still comes out for the four Cup races at Daytona and Talladega. Beard Motorsports is even smaller than Go FAS, but has some speed in the draft. Last year, Gaughan finished 11th in the Daytona 500 and backed it up with a seventh in the July race.

Does Trevor Bayne have a future at Roush Fenway Racing?

This week, one of the biggest news stories of the year came to pass.

Matt Kenseth announced his return to NASCAR after spending the first part of the season skiing and worrying about who the Green Bay Packers would draft last night. Some believed Kenseth could come back after he ruled out retirement last year. Not many people could have guessed where and how he’d be returning —  a part-time return with Roush Fenway Racing, splitting the No. 6 with Trevor Bayne.

It’s obvious right now that Bayne is racing for a job in the future. If Kenseth can show up and run top 10 for the vast majority of the time, he’ll be full-time in 2019 if he wants it. If Kenseth can’t make the No. 6 competitive, that doesn’t mean Bayne is safe. Roush has been very high on Ty Majeski, who needs much more seat time before moving up to Cup. There’s a possibility in the future of Kenseth and Majeski splitting the No. 6 in years to come, especially if AdvoCare doesn’t mind.

A confident driver is a successful driver. Tony Stewart did nothing for 26 races in 2011 before winning a championship just because he found his confidence in the playoffs. The reverse is true, too — a driver with no confidence is a driver with no success. Not many drivers come back and win championships after the owner decides to put another driver in after years of being there.

And honestly, what has Bayne done since winning the Daytona 500? Just 15 top 10s in 173 starts since? He has won a couple of XFINITY races, but doing that didn’t make Kenny Wallace a Cup star. This was a good move by Roush to determine if it’s the driver or the car that is the problem, and they ended up with a few races worth of sponsorship filled too.

Who will end up on top in the XFINITY race at Talladega?

No Cup drivers in this weekend’s XFINITY Series race will mean everything is wide open. Outside of a couple of safe options such as veteran Elliott Sadler or Daytona winner Tyler Reddick, this is going to be a crazy race where almost anybody in the field could win.

Ryan Reed has found a lot of success at Daytona, but he hasn’t found much of it at Talladega, with his best finish being only 24th. Noah Gragson had a great debut last week at Richmond, but finds himself in a totally different situation and track type this weekend.

Finally, there are plenty of small team drivers who will probably find time out front this week, in particular veteran Joe Nemechek for JD Motorsports and Jeremy Clements. Both of these drivers have experience, both are former series winners, and both should perform well at a track with such a level playing field.