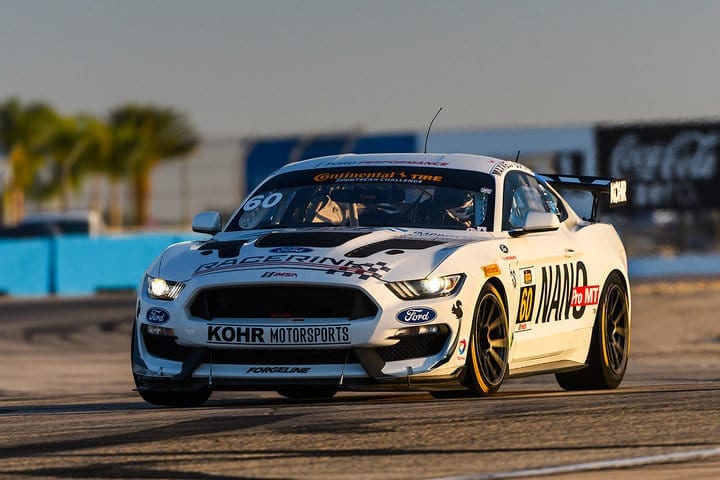 For Friday’s Alan Jay Automotive Network 120, there are 38 cars currently entered between the three Continental Tire SportsCar Challenge classes.  Like at Daytona, the series is still very top heavy.

The GT4-spec Grand Sport has 27 of the 38 entries.  There are a number of changes since Daytona.  Multimatic Motorsports has only two entries on-site (Nos. 8 and 15, no No. 22).  Ty Majeski and Austin Cindric are not entered.  In addition, GMG Racing’s three Audis are not entered.  Entering Daytona was more or less designed so that the team could get reps with their new Audi R8 LMS GT4s prior to the Pirelli World Challenge season opener in St. Petersburg.  Finally, DXDT Racing is not entered with their Mercedes either.

There are also a couple of new teams entered.  Murillo Racing’s second Mercedes-AMG GT4 has been delivered, so Brent Mosing and Tim Probert will move up from Street Tuner and drive the No. 65.

Finally, Rennsport One’s No. 18 Porsche is once again entered, but without listed drivers.  In Daytona, the team was entered with Spencer Pumpelly (who co-drives the No. 28) and Daniel Morad driving.  However, it was withdrawn the morning of the race.

Much like the Roar Before the 24, Classic BMW has two BMW M4 GT4s entered (Nos. 26 and 72).  Currently, Toby Grahovec is entered in the No. 26 alongside Jayson Clunie while Jason Hart and Mike Vess are in the No. 72.  In Daytona, all three shared the No. 72.  These cars are likely the same ones that raced last weekend in the Pirelli World Challenge GTS races at St. Petersburg.

In TCR, six teams are entered, down from seven at Daytona.  Murillo Racing chose not to enter their No. 53 Audi.

The only driver change in the class involves JT Coupal being out of the RS Werkes Racing No. 11 Audi.  The move is potentially related to the fact that Coupal has signed a deal with Compass Racing to drive full-time in Pirelli World Challenge’s TCR class.  He’s been replaced by Ethan Low.

Street Tuner only has five entries, mostly due to the fact that the No. 55 from Murillo Racing is not entered.  The only change is that Tyler Stone will not drive the No. 52 MINI.