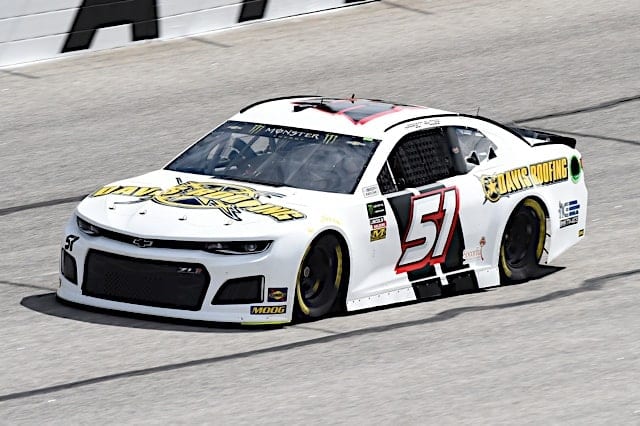 The lower series of the NASCAR national series are known for many things, including their unpredictability with regards to entry lists. There are times when it’s tough to predict three-fourths of the list in an XFINITY or Camping World Truck Series race, thanks to a constantly changing driver lineup and even a slew of part-time teams that occasionally trot out of the woodwork to run a race here and there.

Las Vegas Motor Speedway this weekend is no different. In fact, in the Truck Series, four different teams will field their third different driver in three races. There’s the No. 20, which has included Scott Lagasse Jr., Austin Dillon and Michel Disdier among its ranks thus far. The No. 1 will add Tommy Regan to a roster that’s featured BJ McLeod and Clay Greenfield. Kyle Busch Motorsports’ No. 4 adds Spencer Davis after fielding a truck for owner Kyle Busch and David Gilliland thus far. And the No. 63 will have its third different driver in Scott Stenzel, though to be fair, Daytona International Speedway driver Bobby Gerhart was fielding his own truck rather than one for MB Motorsports before Akinori Ogata and Stenzel stepped in.

It’s even the case, to a lesser extent, in the XFINITY Series, where Joe Gibbs Racing’s No. 18 has Busch climbing in after a Daytona spent with Daniel Suarez and then last weekend’s Atlanta Motor Speedway event piloted by Kyle Benjamin.

But for this weekend at least, the trend has taken to the Monster Energy NASCAR Cup Series, too.

That’s because the No. 51 car will be driven by Cole Custer at Las Vegas in his Cup debut. Custer, a full-time competitor for Stewart-Haas Racing in the XFINITY Series, will make the start many have expected from him since he first began wheeling the No. 00 in the Truck Series as a 16-year-old, ensured a spot in the field due to a 37-car entry list as of Thursday evening (March 1).

Custer becomes the third driver in three races to assume the No. 51 in 2018. Justin Marks drove at Daytona, while Harrison Rhodes also made his Cup debut for the team at Atlanta.

Now, a caveat: This isn’t exactly like, say, JGR’s No. 18 in the XFINITY Series, where Suarez, Busch and Benjamin are all in the same ride and virtually the same equipment and resources. In the case of Custer and co., he’s competing for Rick Ware Racing, which owns the points and charter associated with the number. But while Ware fields the team in name, it’s reportedly Stewart-Haas Racing that is preparing the car — kind of like how the No. 33 used to be Richard Childress Racing some weeks and Circle Sport the others.

And this isn’t necessarily new. At Daytona, the No. 51 was fielded for Marks in a collaboration with Premium Motorsports, which otherwise had just one car on its roster in Danica Patrick. Not only has the driver changed each week; in a matter of speaking, so has the team.

Putting that aside, the simple notion of a different driver in the first three Cup races for a team is still fairly irregular these days; the last time it occurred was three years ago in 2015.

And that was, well, an odd year. You may or may not recall that that year’s Daytona 500 featured neither Busch brother after Kurt Busch was briefly suspended by NASCAR, while Kyle didn’t race following an injury in the previous day’s XFINITY event. Brian Vickers, Michael Waltrip Racing’s then-main driver in the No. 55, was also out due to his recurring health issues.

As such, there were three teams in 2015 that fielded three different drivers for the first three races. The aforementioned No. 55 had Michael Waltrip and Brett Moffitt in the seat before Vickers was medically cleared for Vegas. The No. 34 for Front Row Motorsports first fielded David Ragan before Ragan abandoned ship for JGR’s No. 18 in Kyle Busch’s absence, leaving Joe Nemechek and then Moffitt to fill out the ensuing events. And then there’s the No. 33, operated by RCR for Daytona and Vegas (Ty Dillon and Brian Scott) and then by HScott Motorsports for Atlanta after the team bought out the number when Michael Annett failed to qualify in the No. 46.

In previous years (and, again, still in the lower series), the act could occasionally be a bit more prevalent. Teams didn’t necessarily hire drivers for the full season, and toward the beginning of the year especially, certain fledgling operations were simply trying to figure out what their season would look like, trying different driver combinations in the process depending on who brought a sponsor or who was simply available. That’s been cut down significantly across all three series in recent years with the lowering of car counts, particularly on the Cup side, where the charter system has cut some of the also-rans out of the equation.

To that end, something like what’s happened with the No. 51 in 2018 wasn’t exactly something one might have expected to happen in an era where stability is generally championed, or at least preferred. The Cup Series has seen dwindling numbers of drivers who join its ranks in a given season, when in years past, upward of 70 or 80 might run at least one race in a season. Cup is the familiar bunch, the elite, the best-of-the-best duking it out each week. It’s the lower series that have more spontaneity and surprises. There could be a team that shows up at ISM Raceway in Phoenix next week that few fans have even heard of — you don’t know for certain.

The lineup for the No. 51 team in 2018 has still not been solidified, with Custer announced for a few races and Marks saying he could run a few more throughout the season. So this trend could conceivably continue, if not with four in four races, then four in five races or four in six, something like that.

And hey, if it gives the series some new faces and storylines other than the usual 30-something regulars, that isn’t the worst thing in the world.