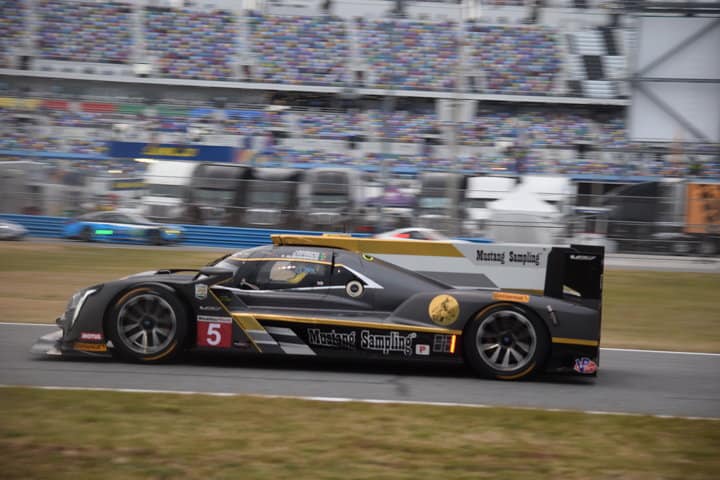 In the third quarter of the Rolex 24 at Daytona, attrition started to take its hold.  A number of the potential competitors to Action Express Racing have been eliminated from the race.  In the case of Wayne Taylor Racing, every time they would make a move back towards the front, another tire would fail.

During the 18th hour, team owner Wayne Taylor voluntarily withdrew the No. 10 Cadillac.  Why?  He indicated that it was getting to the point where they were imposing an unreasonable risk upon their drivers to keep going.  Ryan Hunter-Reay described the situation as such on Twitter.

Well, our Rolex 24 has come to an end. 7 blown right rear tires. Bottom of Car is destroyed from blown rubber. We’re not sure why or what. Heck of an effort from this whole team. Time for a bit of rest, on to the 12 hours of Sebring

The Mazda challenge was effectively derailed by mechanical issues, blown tires and various others.  Both of Acura Team Penske’s ARX-05s spent time in the garage.

Even the Cadillacs weren’t immune.  During the race’s fourth full course yellow, Christian Fittipaldi suddenly pulled into the garage to quickly have water added to the car.  At the time, Fittipaldi had a one-lap lead and it cost him that lap.  Despite the garage visit, Fittipaldi was still in the lead after 18 hours, followed by teammate Mike Conway.  Third was the No. 32 United Autosports Ligier driven by William Owen, four laps down.  Romain Dumas was fourth, five laps down.  Ho-Pin Tung in the No. 78 ORECA from Jackie Chan DC Racing JOTA was fifth, seven laps down.

GT Le Mans continued to be a Ford Chip Ganassi Racing IMSA benefit.  The two Ford GTs have run like clockwork and put significant distance on the rest of the class.  Up until the fourth full course yellow came out, the two Fords were on a lap of their own with Dirk Müller leading in No. 66 over Ryan Briscoe in the No. 67.  However, the yellow allowed Corvette Racing’s Mike Rockenfeller to get the No. 3 back on the lead lap.  Oliver Gavin was a lap down in fourth, while Earl Bamber was three laps down in fifth in the No. 912 Porsche..

Ever since the Montaplast by Land-Motorsport Audi was penalized in the eighth hour, the race has been wide open.  Six cars are on the lead lap with Riley Motorsports’ Adam Christodoulou leading the class in his Mercedes leading after 18 hours.  Paul Miller Racing’s No. 48 Lamborghini was second, followed by Michael Shank Racing with Curb-Agajanian’s No. 86 Acura.  That was despite a wild slide that Katherine Legge took that ultimately led to a debris caution.

Coverage of the Rolex 24 at Daytona will continue on FOX Sports 2 until 10:30 a.m.  At that point, the coverage will switch to FOX Sports 1 and stay there all the way through the finish.